Applications of Magnetic Microbubbles for Theranostics

Among all the diagnostic imaging techniques, ultrasound imaging has a unique advantage because of its features of real-time, low-cost, high safety, and ease of incorporation into portable devices. By using the ultrasound contrast agents, the resolution and sensitivity of clinical ultrasound imaging have been greatly improved [1-3]. Gas filled microbubbles encapsulated with the polymer, lipid or surfactant shells have been well established for the last decade. Because of their high compressibility, microbubbles can be used as the most effective contrast agent for ultrasound imaging [4, 5]. Moreover, with the use of sonoporation [6-8], microbubbles are also becoming widely used as drug delivery systems and nucleic acid transfection tool [9-12]. However, the transfection efficiency is limited by ultrasound intensity. As an imaging tool, the imaging quality of ultrasound is suboptimal with contrast lower than that of computer tomography (CT) or magnetic resonance imaging (MRI) [13-16].

On the other hand, MRI is another imaging tool which is non-invasive and capable of providing morphological and functional information with a high spatial resolution and excellent soft-tissue contrast [17]. Magnetic nanoparticles can be used as powerful contrast agents for MRI [18, 19]. Especially, magnetic iron oxide nanoparticles with superparamagnetic property have also shown potential as multifunctional nanoparticles for clinical translation besides they have been used as MRI constrast agents in clinic because their features could be easily tailored by including targeting moieties, fluorescence dyes, therapeutic agents or agents. For example, they can also be used as potential anti-cancer agents for their cytotoxicity, genotoxicty and hyperthermia [20-22].

Gas-filled and polymer/lipid/surfactant encapsulated microbubbles have been well established in the last 20-30 years. They can be prepared by various methods, such as sonication [31-33], high shear emulsification [34, 35], membrane emulsification [36, 37], ink jet printing [38], electrohydrodynamic atomization [39, 40] and microfluidic processing [41-44]. 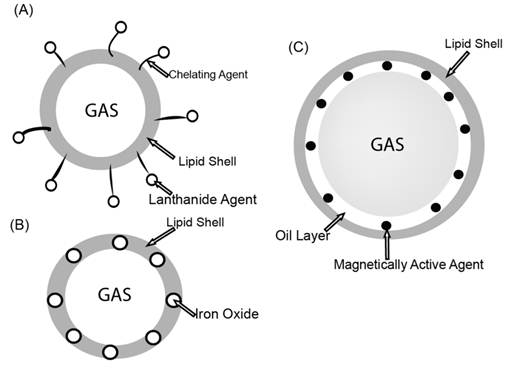 Fig. 2(A) shows an entity of Fig. 1(A) generated by electrostatic coupling [25]. Soetanto et al. covered magnetite particles with an anionic surfactant to make them negatively charged and their self-made surfactant microbubbles were also negatively charged. In the end they use calcium ions as multivalent anions to connect the magnetites to the surface of the surfactant microbubbles. Actually, in order to obtain magnetic microbubbles with nanoparticles coupled to the surface of the shell, one can also use microfluidic devices, the coupling process is much easier [13]. For example, Park et al. mixed an aqueous solution containing anionic Fe3O4 nanoparticles, lysozyme and alginate with CO2 gas to the three channels through syringe pumps to form stable functionalized magnetic microbubbles in a narrow size distribution (Fig. 3(A)).To entrap magnetic nanoparticles into oil layer (inner layer) of a double-layered microbbuble (Fig. 1(C)), Yang et al. [23] used a double solvent evaporation interfacial deposition process (double-emulsion procedure) to prepare magnetic microbubbles which have a polymer shell with superparamagnetic iron oxide (SPIO) nanoparticles embedded inside (Fig. 2(B)). The prepared magnetic microbubbles have a mean diameter of 3.98 μm with polydispersity index of 0.425. Chow et al. [27] used a similar method (Fig. 3(C)) to prepare MION-entrapped PMBs (monocrystalline iron oxide nanoparticles-entrapped polymer microbubbles).

Liu et al. [17] used one-pot emulsion polymerization to embed iron oxide nanoparticles into the microbubble shells (Fig. 3(B)), this is a living example as showed in Fig. 1(B). They used a syringe to add butyl cyanoacrylate (BCA) into freshly prepared ultrasmall superparamagnetic iron oxide (USPIO) solution, and then agitated the mixture at a high speed (1000 rpm) at room temperature. Then they collected the upper solid foam after 4 days. At last they washed out the impurities with Triton X-100 and centrifuged the UPMB (USPIO-PBCA microbubble, that is ultrasmall superparamagnetic iron oxide-poly(butyl cyanoacrylate) microbubble) suspension to collect the supernatant bubble-cake. After ultrasound exposure, the iron oxide nanoparticles inside the microbubble shells are released out.

In a word, it's hard to say which one of the present methods is the best to prepare stable, monodispersed magnetic microbubbles because each method has its advantages and disadvantages respectively. Based on the present methods, in order to obtain the better size distribution, the cost of the processing inevitably would be increased because of the low yield. Therefore, specific preparation methods are employed to meet corresponding needs. And the development of novel preparation methods is also still attracting in the future research.

Although ultrasound imaging is a safe and non-invasive imaging technique in the diagnostic field, the signal is usually disturbed by many factors. The ability of ultrasound to reveal the tissue structure is worse than that of CT and MRI. So it's a good option to combine US imaging with other imaging modalities, such as MRI. Magnetic microbubbles can make this formulation come true. The magnetic nanoparticles embedded in the bubbles can be excellent contrast agents for MRI. On the other hand, the microbubbles are proven to be good contrast agents for ultrasound imaging. Furthermore, gas-filled microbubbles can potentially be used as an intravascular MR susceptibility contrast agent in vivo because of the induction of large local magnetic susceptibility difference by the gas-liquid interface. The dual-mode imaging could offer more valuable information to make more accurate diagnosis than either modality alone. In MRI, the magnetic field can also guide the magnetic microbubbles to the specific locations, making the imaging more efficient.

Schematic illustrations of three different procedures [13, 17, 27]. A: micro fluidic device: membrane materials, nanoparticle solution and the gas are pumped into the micro tubes to form magnetic microbubbles through electrostatic coupling; B: one-pot emulsion polymerization: consisting of the emulsion polymerization of BCA and the encapsulation of USPIO; C: double-emulsion: consisting of the forming of a water/oil emulsion and (water/oil)/water emulsion, and lyophilization to entrap MION into the oil layer of the bubble shell. 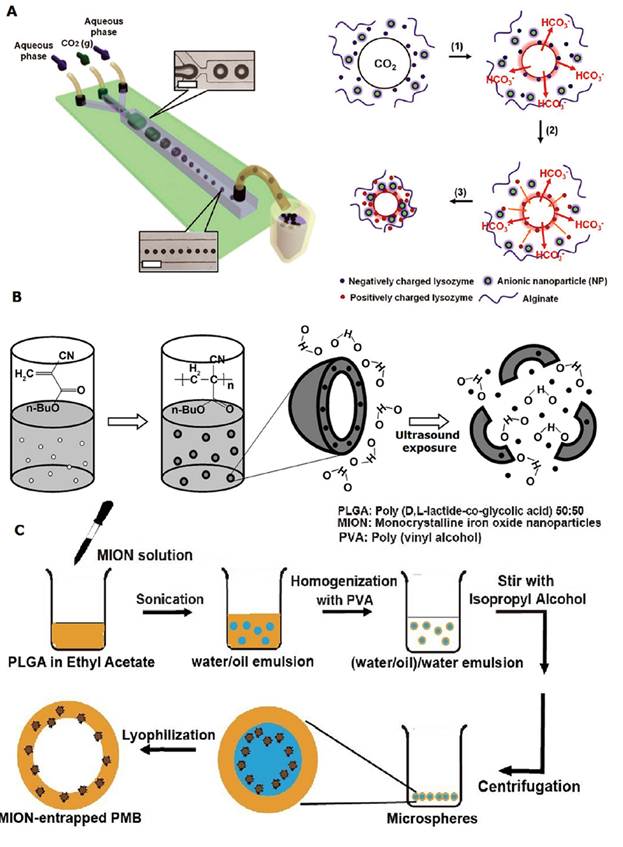 Similar phenomena were observed in the case of Liu's research [17] in which the USPIOs were entrapped in the hard shell of the microbubble. They used US-MR phantom imaging assay to determine the acoustic and magnetic properties of the microbubbles. Compared with pure microbubbles, UPMBs (USPIO-PBCA microbubbles) generated comparable signals both in ultrasound imaging and MRI. When the magnetic nanoparticles are coupled to the surface of the microbubble [13], they can also increase the T2 relaxation rate of the water near the ROI (region of interest) to enhance the negative signal.

But here comes a problem: How to form a kind of magnetic microbubbles to gain the strongest intravascular MR susceptibility? Dharmakumar et al. [45] resolved this problem through analytical approximations and numerical simulations. They used finite-element simulations to demonstrate that the effective volumetric magnetic susceptibility of a coated microbubble is dependent on the radius, the shell volume fraction and the magnetic susceptibility of the particulates on the shell. The results suggest that a suitable microbubble formulation which will be MR-sensitive to small pressure changes at 1.5 T must be 2-3 μm in radius and be uniformly coated with single-domain magnetic nanoparticles, and the shell volume fractions should be below 5%, which means the magnetic microbubble shells should be very thin. Actually most lipid-encapsulated and surfactant-encapsulated microbubbles are up to the mustard.

Angiogenesis is the normal physiological process for newblood vessels to develop from preexisting ones, it is a keystone in the treatment of cancer and potentially many other diseases, such as cardiovascular diseases. With the introduction of microbubbles that can be targeted to the molecular markers related to angiogenesis (VEGFR-2, integrin αvβ3, and endoglin), ultrasound imaging has become an attractive imaging modality to non-invasively assess tumor angiogenesis.

The schematic of molecular imaging with targeted ultrasound contrast agents [47]. 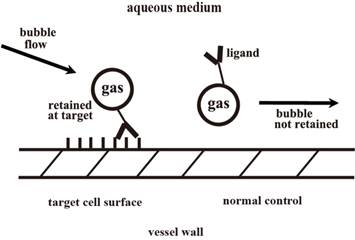 Molecular imaging with targeted ultrasound contrast agents (Fig. 4) can be illustrated as the following: A specific ligand, which can bind to the receptor of interest, is attached to the shell of a gas-filled microbubble. The resulting targeted contrast material circulates for a period of time, and is gradually cleared. At the same time, targeting occurs due to the specific ligand-receptor interaction, and some of the microbubbles which had a chance to flow through the target area are selectively attached to the receptor. The area with high level contrast marks the receptor/disease site and can be imaged [47].

However, traditional imaging methods act well in atherosclerosis, angiogenesis and inflammation of microvasculature but not larger vessels (such as aorta) due to the high flow speed of the blood in larger vessels (high shear stress) [4-5]. Molecular imaging with magnetic microbubbles may resolve this difficulty: with the guidance of the magnetic field, magnetic microbubbles can accumulate in the region of interest, the targeting molecular markers then can specifically attach to the tissue or cells to offer a real-time, noninvasive visualization at the molecular level.To make it possible to enhance the ultrasound molecular imaging efficiency of atherosclerosis in the aorta, Wu et al. [28] prepared magnetic microbubbles conjugated with anti-VCAM (vascular cell adhesion molecule)-1 antibodies (Fig. 5) to enhance the molecular imaging efficiency of atherosclerosis. 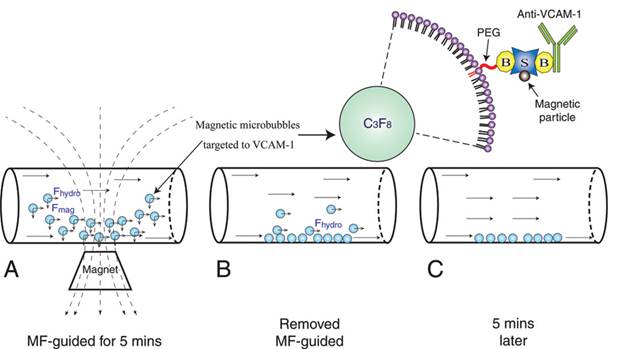 This result means the anti-VCAM-1 antibody coated magnetic microbubbles can efficiently attach to the inner wall of aorta even at a very high shear stress, resulting in improved detection of the early stages of atherosclerosis, which makes them excellent atherosclerosis imaging contrast agents. They also used biotinylated anti-mice P-selectin (MBpm) to replace the anti-VCAM-1 antibody to form a similar type of microbubbles which can attach to endothelial P-selectin, making the magnetic microbubbles to be excellent magnetic guided inflammatory molecular imaging contrast agents in high-shear flow [29].

To minimize drug degradation and loss, to prevent harmful side-effects and to increase drug bioavailability and the fraction of the drug accumulated in the required zone, various drug delivery and drug targeting systems are currently developed or under development [48-50].

Microbubble can be a good type of drug delivery system due to the phenomenon called sonoporation: Cell membranes can become temporarily “open” to small and large molecules and then “resealed” when relatively low amplitude ultrasound is applied to a cell suspension that contains an ultrasound contrast agent. Consequently, foreign molecules may be trapped in the cells. [6-8]. If we trap drugs inside the microbubbles, with the sonopoartion, the drugs will be released out of the microbubbles, and then swallowed by the temporally opened cells and trapped inside them. Magnetic microbubbles are especially outstanding drug delivery systems of microbubble-type drug delivery systems because they can be guided by the magnetic field to the specific locations of interest.

When the Fe3O4 nanoparticles are delivered into cells, they can cause an effect called hyperthermia with an alternating magnetic field introduced, causing corresponding cell damage. Although this work is not strictly a drug delivery case as it only delivers the nanoparticles inside the bubble shell to tumor cells, not the specific drugs, the Fe3O4 nanoparticles can serve as hyperthermia agents in some conditions. We can also predict that if we filled the Fe3O4-inclusion microbubbles with specific drugs, for example, doxorubicin (a tumor suppression drug), we can effectively delivery the drug to tumor tissue with magnetic field guiding.

Vlaskou et al. [51] formed magnetic microbubbles through self-assembly of the lipids, magnetic nanoparticles and nucleic acids (Fig. 6). They used three different types of nucleic acids (the luciferase reporter gene in NIH3T3 mouse fibroblasts, in H441 human lung epithelial cells and luciferase siRNA) to study the delivery efficiency in cultured adherent cells, the results showed that when a magnetic field was applied, efficient delivery of these nucleic acids' delivery was achieved and it was comparable with commercially available transfection reagents (SONOVUE microbubbles). And the transfection efficiency was much higher than when using plasmid applied with SONOVUE microbubbles (one kind of commercially available lipid microbubbles) and ultrasound. Combined use of ultrasound and the magnetic field didn't further enhance the transfection efficiency. The in vivo experiments in mice showed that when a magnetic field was introduced to the mouse chest, the accumulation of plasmid DNA in the targeted site would be two to three fold of the untargeted site in the lungs. They used the similar formulation to transfer a report gene to HeLa cells, the cells treated with the microbubbles and ultrasound expressed a dose-dependent cytotoxicity. This formulation of magnetic microbubbles can be a promising gene delivery vector and cancer gene therapy reagent.

Schematic of the self-assembly of the lipids, MNPs, and nucleic acids into magnetic microbubbles and the animal experiment setting [51].