The Role of CXCL12-CXCR4 Signaling Pathway in Pancreatic Development

Chemokine (C-X-C motif) receptor 4 (CXCR4) is the receptor for chemokine (C-X-C motif) ligand 12 (CXCL12, also known as stromal derived factor-1, Sdf1). CXCR4, a protein consisting 352 amino acids, is known to transduce various signals such as cell differentiation, cell survival, cell proliferation, cell chemotaxis and apoptosis [1, 2]. The expression of CXCR4 is observed in embryonic stem cells, blood cells, haematopoietic stem cells, endothelial cells, angioblasts and smooth muscle cells [3-9]. The CXCL12-CXCR4 signaling pathway has very important roles in the embryonic development. Mutant mice for CXCL12 or CXCR4 genes showed lethality due to defects in neurogenesis, angiogenesis, cardiogenesis, myelopoiesis, lymphopoiesis and germ cell development [10-13]. Recently, we reported that CXCL12-CXCR4 signaling pathway has a crucial role in regional specification of the gut endoderm during early development [14]. Here, we would like to focus on the role of CXCL12-CXCR4 signaling pathway in pancreatic development and summarize recent findings of its role in the induction of the pancreatic progenitor cells.

An overview of early pancreas development

The earliest pancreatic marker gene, pancreatic and duodenal homeobox 1 (Pdx1) starts to be expressed in the pre-pancreatic endoderm at the 9-somite stage (ss), corresponding to embryonic day 8.5 (E8.5) in the mouse and at 8 ss in the chick [14-17]. Pdx1 is also expressed in the stomach and duodenal endoderm. The pancreas is derived from the dorsal and ventral endoderm, which give rise from two distinct origins. In the mouse, the pancreatic bud emerges from E9.5. Fate map studies revealed that while the dorsal pancreas progenitor cells originated at the 3-6 somite levels at 7-9 ss in the mouse embryo, the ventral pancreatic progenitors are closely associated with hepatic progenitors and that they originates at the 1 ss at the lateral endoderm posterior to the anterior intestinal portal (AIP) lip [18]. Later on, at 3-4 ss, they were observed at the outer side at the AIP lip.

Analyses of the Pdx1 homozygous null mutations have shown that PDX1 have a key role in the pancreas development: the initial pancreatic bud formation and early insulin and glucagon expression are observed, but further development is arrested. However, overexpression of Pdx1 did not induce an ectopic pancreas in the pre-stomach or pre-intestine region in the chick embryo, therefore, Pdx1 alone does not act as a pancreatic determinant [24].

Activin and fibroblast growth factor 2 (Fgf2, also known as bFGF), which are secreted from notochord, are candidate factors for maintaining the early pancreatic related genes through repression of sonic hedgehog (Shh) expression in the pre-pancreatic endoderm [25]. However, the notochord signals (Activin and Fgf2) are considered as permissive signals rather than instructive signals, because the notochord does not induce the pancreas in the posterior non-pancreatic endoderm [26]. Next, the dorsal aorta replaces the notochord and comes into close contact with the pre-pancreas endoderm and gives the signals that enhance the pancreas differentiation. The dorsal aorta is necessary for dorsal pancreas development, but the molecular nature of these signals is still unknown. The induced β cells produce vascular endothelial growth factor (VEGF), then attract blood vessels, and potentiate insulin expression [27]. 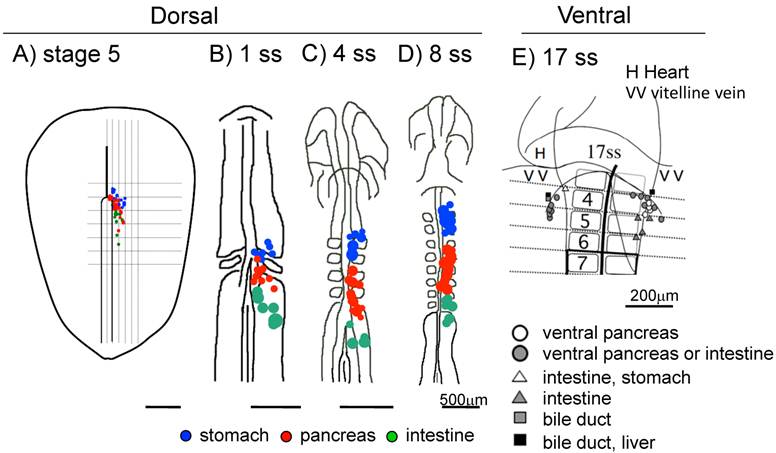 The molecules involved during pancreatic development. The pre-pancreatic endoderm receives the Pdx1 inducing signals from the angioblasts (One of the candidate signal is Retinoic Acid; RA). And next, Pdx1-expressing pre-pancreas endoderm receives the pancreatic maintenance signals sequentially from the notochord, then from the endothelial cells. The pancreatic progenitor cells are induced and these cells express Pdx1, Sox9 and Ptf1a. All endocrine cells are generated from neurogenin 3 (Neurog3)- expressing endocrine progenitor cells, which then differentiate into endocrine cells expressing specific set of transcription factors. 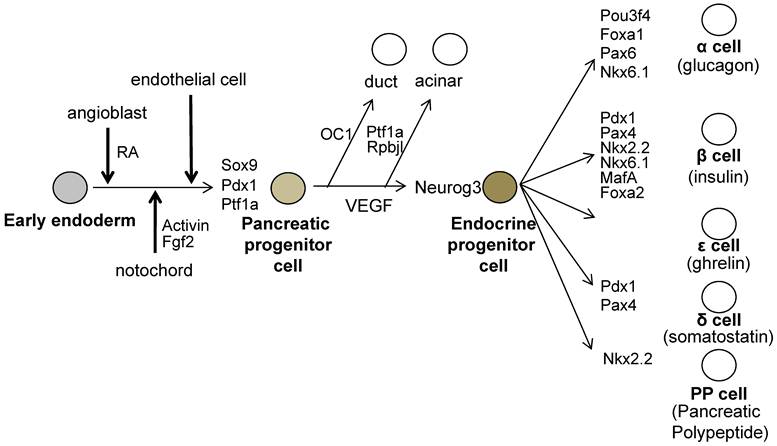 Role of the chemokine signals in pancreatic development: regionalization of the early endoderm

It was reported that activin and bFGF signals from the notochord are permissive signals for pancreatic development, but up to date, there is little information on the inductive signal, by which the pre-pancreas region is defined in the early endoderm. Previously, we have reported in a fate map study, which was based on transplant experiments, that regional-specific endodermal fates are specified in a chronological order of the stomach (SRY-box containing gene 2; Sox2 expression, 2 ss), intestine (caudal type homeobox 1; CdxA expression, 5 ss) and then pancreas (Pdx1 expression, 8 ss) (Figure 3) [19, 32].

At 8 ss, Pdx1 starts to be expressed in the inter-somite endoderm in the pre-pancreas region (4-7 somite levels). Later, the Pdx1 expression extends to the endoderm underneath the somites. This Pdx1 expression pattern correlates closely with the spreading of the angioblasts at between the somites, as well as with the migration of the endoderm. The Pdx1-expressing pre-pancreas endoderm lies in contact with the angioblasts, which express angioblast markers such as LIM domain only 2 (Lmo2), T-cell acute lymphocytic leukemia 1 (Tal1), kinase insert domain protein receptor (Kdr, also known as Flk1) and CD34 antigen (Cd34) [14].

Ectopic overexpression of Cxcl12 in the early endoderm attracted the Lmo2-expressing cells (angioblast), which then induced the Pdx1 and Sox9 expressing pancreatic progenitors and resulted in generating a bigger pancreas and expanded insulin-expressing area. Conversely, inhibition of CXCR4 by AMD3100 treatment disturbed the migration of angioblasts to the proximity of the endoderm and delayed the timing of the aorta formation. This caused a reduction in Pdx1- and Sox9-expressing pancreatic progenitors and led to a smaller pancreas with a smaller insulin-expressing area. These results suggest that the correct timing that angioblasts come in contact with the endoderm is a key to induce the Pdx1 expression (the induction of a pancreatic fate) in the pre-pancreas region. And this timing is finely controlled by CXCL12-CXCR4 signaling pathway (Figure 3) [14]. 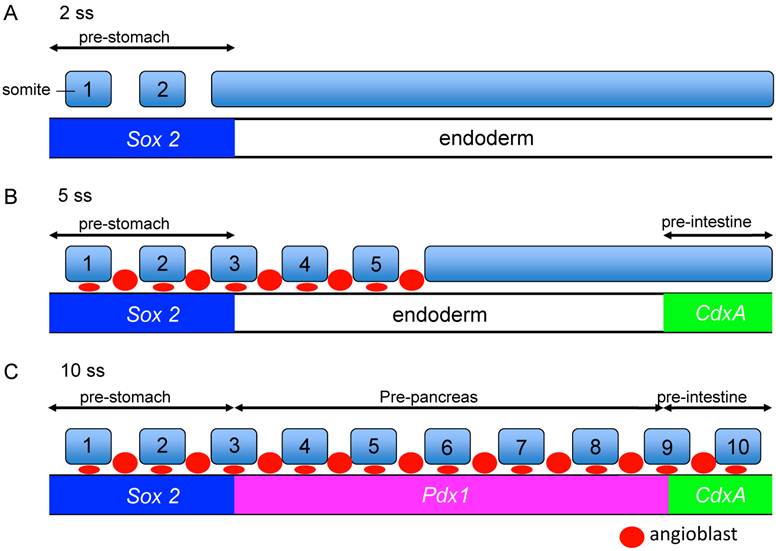 The role of the chemokine signals in the early pancreatic differentiation

The CXCL12-CXCR4 signaling pathway has key roles in the vascular formation. Cxcl12 or Cxcr4 mutant embryos die before birth. And there are defects in the vasculature of the gastrointestinal and nerve systems [11-13, 33]. It is known that CXCL12 and CXCR4 are expressed in the mouse islets. And it is also known that CXCR4 is expressed in the proliferating duct epithelium in the regenerating pancreas of non-obese diabetic (NOD) mice engineered to express interferon (IFN)-γ driven by the rat insulin promoter (RIP). In the IFN-γ transgenic mice, the inhibition of CXCR4 function caused the defects in cell proliferation and increases apoptosis in the pancreatic duct cells [34]. In the RIP-CXCL12 transgenic mice, the development of diabetes by the streptozotocin treatment is rescued. In this report, it is also revealed that six hours after streptozotocin administration, a pro-proliferative signal, phospho-Akt, was activated in the α cells, but not in the β cells. In the control mice, β cells were replaced by the α cells two weeks after streptozotocin treatment. In contrast, in the RIP-CXCL12 transgenic mice, many β cells persisted or regenerated [35]. These data suggest that a cross-talk mechanism might exist between the α and β cells. It is reported that CXCL12 shows cytoprotective effects on the β cells, and controls the β cell survival not only through the pro-survival kinase Akt, but also through the activation and stabilization of β-catenin/transcription factor 7 like 2, T cell specific, HMG box (TCF7L2) transcriptional activators [36]. It is also reported that CXCL12 expression is re-induced in the β cells by treatment with streptozotocin, thapsigargin and cytokines in the adult islet and in the rat insulinoma INS-1 cells. CXCR4 is expressed in both the α and β cells. The paracrine signal of CXCL12 from β cells activates in α cells the protein kinase Akt and induces the production of prohormone convertase (PC) 1/3 and glucoincretin hormone glucagon-like peptide-1 (GLP-1). CXCL12 also shows anti-apoptotic activity. Finally, GLP-1 signal from α cells, in combination with CXCL12 are shown to control the growth and viability of β cells [37]. Recently, it was also reported that Epithelial progenitor 1 (EP1), which is related to the uPAR/CD59/Ly-6/snake toxin family that contains cysteine-rich domains, was detected in the duct cells of regenerating pancreas of the IFN-γ transgenic mice, but not in the embryonic stages, or in the wild type mice. Flow cytometry analysis revealed that the EP-1 positive cells in the above INF-γ transgenic mice, also expressed CXCR4. In the RIP-CXCL12 transgenic mice, upon cerulein treatment EP-1 were expressed in the epithelial cells in a scattered manner throughout the pancreas. These data suggest that EP1-expressing cells respond to CXCL12 and are involved in epithelial cell expansion. Until now, there is not much information on how EP1 regulates the pancreatic regeneration through the CXCL12-CXCR4 axis. Further analysis is required to identify the function of EP1 in the pancreatic regeneration process [38]. CXCL12 also control the morphological branching in the developing pancreas [39]. However, the defect in branching was observed in the ventral but not in the dorsal pancreas in the Cxcl12 mutant mice [39]. In the zebrafish, inhibition of cxcl12b and cxcr4a caused the duplication of pancreas [40]. This is compatible with a scenario in which CXCL12-CXCR4 axis affects the migration of the angioblasts, which induced the Pdx1 expression in early endoderm in the chick embryo. This discrepancy can be explained by the difference in the size between the chick and zebrafish embryos. We hypothesize that because the zebrafish embryo is much smaller, the cxcr4a- and Lmo2-positive mesodermal cells (angioblasts), which originated from the lateral plate mesoderm, do not have to travel a long distance to reach the site at the pre-pancreatic endoderm border compared to the case of the chick embryo. However, without guidance by the CXCL12-CXCR4 signaling, the migration of the angioblasts to the correct region (pre-pancreatic region) in the zebrafish might be disturbed, thereby generating a duplicated pancreas. Another possibility is that in smaller size embryos (for example, zebrafish), at conditions without the CXCL12-CXCR4 signaling, a lower number of angioblasts might have reached the pre-pancreas endoderm, compared with the wild type embryos. This resulted in the induction of Pdx1 in a patchy fashion in the endoderm, which then yielded a duplicated pancreas. Furthermore, cxcr4a is also important for the migration of endoderm cells themselves [40, 41]. Therefore, pancreas formation might also be affected in the CXCR4 inhibited embryos. In contrast, in the chick embryo, because of its large size, Cxcr4 and Lmo2-positive mesodermal cells (angioblasts) have to cover a larger distance to contact the pre-pancreas region at a correct timing. We hypothesize that when lacking the CXCL12-CXCR4 signaling guidance in the chick embryos, the directed migration fails to occur properly (Figure 4) [14]. It is also reported that endothelial cells are generated from cxcr4a positive anterior mesoderm and cxcl12b is expressed in the endoderm underlying the lateral aorta in the zebrafish embryos. It is also reported that Cxcl12b-Cxcr4a signaling has crucial roles in the lateral aorta formation in the zebrafish [42]. This results support our observations in the early chick embryos [14]. 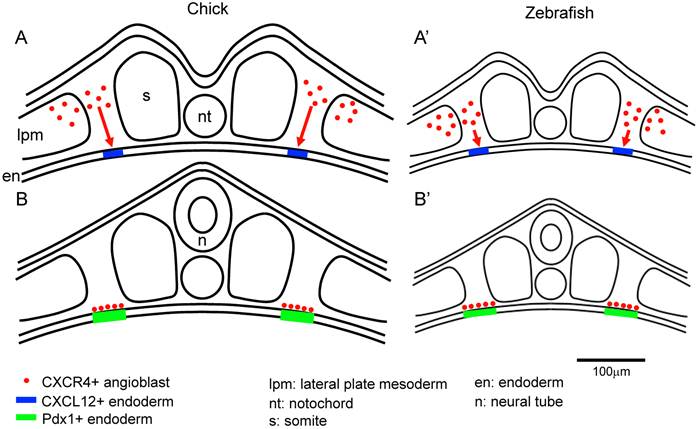 We revealed the mechanism by which the early pancreas regionalization is controlled in the early endoderm. CXCL12-CXCR4 signaling pathway controls the spatiotemporal migration of the angioblasts, which has the pancreatic inducing activity. CXCL12-CXCR4 signaling does not directly induce the expression of Pdx1 (Pancreas) in the early pancreas, but rather through an indirect way, by controlling the migration of the angioblasts. The understanding of the nature of normal pancreatic development is a key to succeed the regeneration of β cells from pluripotent stem cells to treat the diabetes mellitus [43, 44].