Introduction: chemokines in homeostasis and inflammation

Movement of leukocytes from peripheral blood into and within tissues is critical for proper immune functions. This is mainly regulated by chemokines, and specific chemokine receptors. The large majority of approximately 50 human chemokines fall into the group of either CXC or CC chemokines on the basis of their N-terminal cysteine residues as reviewed extensively elsewhere [1]. In addition to chemoattraction, chemokines participate in tissue homeostasis, embryonic development, haematopoiesis, and angiogenesis. They assist in the development of inflammatory responses; growth and survival of cancer cells, and the development of inflammatory responses [2-4]. Although still a matter of debate[5], chemo-attraction occurs via a concentration gradient of a specific soluble chemokine which binds to its specific chemokine receptor leading to a coordinated cascade of signal transduction resulting, in addition to chemotaxis, a wide range of functions required for host defense, including adhesion, respiratory burst, degranulation, and lipid mediator synthesis [6].

CXCL12 (formerly Stromal-cell derived factor-alpha, SDF1-α) is a pleiotropic chemokine [7, 8] previously believed to be a homeostatic chemokine due to its ubiquitous expression in the bone marrow, lymph nodes, liver, lung, brain, heart, kidney, thymus, stomach and most abundantly in the pancreas, spleen, ovary and small intestine [9]. Its role was thought to be exclusively as a regulator of normal leukocyte recirculation [8, 10], hematopoiesis [11] and infection of the HIV virus [12]. However, more recently CXCL12 was discovered to be a participant in homing of progenitor leukocytes into the marrow microenvironment [13], as well as adaptive immune processes - for example, costimulation of CD4+ T cells activation and survival [14, 15]. The current review will focus on the role of the chemokine CXCL12 and its receptors, CXCR4 and CXCR7, in inflammation, specifically intestinal, such as the one occurring in inflammatory bowel disease (IBD).

The CXCR4/CXCR7/CXCL12 axis in inflammation

CXCL12 binds to two known receptors, CXCR4 and CXCR7 [10]. The fundamental importance of this chemokine and its receptors CXCR4 and CXCR7 was shown when both CXCL12 [16] and CXCR4 [17] 'knock-out' mice exhibited critical defects in leukocyte generation and hematopoiesis, leading to embryonic and neonatal fatalities. The phenotype and function of the CXCR4/CXCR7/CXCL12 trio in several immunological and auto-immune disorders was recently explored.

In rheumatoid arthritis (RA), increased amounts of CXCL12 mRNA were found in RA synoviocytes [18, 19] and elevated CXCR4 expression by synovial memory T cells was reported [19, 20] suggesting that CXCL12/CXCR4 play a role in the recruitment of inflammatory cells to the joint. Noteworthy is the fact that although synovial [21] and plasma [22] CXCL12 levels were increased in RA, this did not correlate with disease activity nor with anti-inflammatory treatment, such as Methotrexate [22]. Functionally, in both humans and a mouse model of arthritis, CXCR4 and CXCL12 were found to exert pro-inflammatory properties [23, 24]. Furthermore, CXCR4 was a requisite for these pro-inflammatory effects, as observed by both the use of small molecule antagonists [24] and CXCR4 knock-out mice [25], both exhibiting reduced joint inflammation. The mechanism via which CXCR4-CXCL12 acts is still not entirely elucidated. However, data suggest that the influence of CXCR4 in RA is via accumulation of CD4+ T cells in synoviocytes [19, 23].

CXCL12/CXCR4 interactions are also implicated in chronic lung inflammatory processes. In these disorders, CXCR4/CXCL12 were found to operate similarly to their mode of action in RA. CXCL12 was upregulated in the lung in both humans and animal models of lung inflammation [26, 27]. It exhibits pro-inflammatory influence [26, 28] as observed by increased influx of CXCR4+ cells from the bone marrow to the lung. Small molecule inhibitors or neutralizing antibodies of CXCR4 attenuated lung inflammation [28, 29], highlighting its critical involvement in the pathology of this disorder.

However, in contrast to RA, mouse models of lung inflammation, induced either by aerosolized OVA or cockroach allergen, suggest CXCR4 mediates its influence via neutrophil recruitment to the lungs, and not T cells [26]. Data in humans are still conflicting [30-32].

IBD, comprised of ulcerative colitis (UC) and Crohn's disease (CD), are chronic inflammatory diseases of the gastrointestinal tract that arise out of dysregulated immune system response to environmental triggers in genetically susceptible individuals [38].

Growing body of evidence suggests that the chronic intestinal inflammation results from defects in the ability to properly regulate the immune system in response to enteric microbiota. These defects include alterations in chemokine and pattern recognition receptors expressed by epithelial cells. Thus, in addition to proper recognition of the gut microbiota, disease pathogenesis probably reflects defects in regulation of influx of inflammatory cells, mediated via chemokines [39, 40].

For example, CXCL8, and its receptors, CXCR1 and CXCR2, exhibit increased expression by intestinal epithelial cells (IECs), macrophages, fibroblasts and neutrophils in the mucosa of IBD patients [41]. In experimental mice models of IBD, the expression of the mouse homologs for CXCL8, CXCL1 and CXCL2, are increased and associated with pro-inflammatory activity [42] and CXCR2 antagonists inhibited intestinal inflammation in murine IBD models [43, 44].

Another example is CCR9, expressed on intraepithelial and lamina propria T cells. CCR9 is involved in intestinal infiltration in IBD [45], probably by responding to CCL25, expressed by epithelial cells, specifically in the small intestine [46]. Results from a phase II clinical trial using a CCR9 antagonist in CD patients resulted in reduced disease severity [47]. The suggested mode of this antagonist is via inhibition of influx of IL17-secreting T cells.

Another chemokine which is targeted in a clinical trial for the treatment of IBD is CXCL10 [48]. In this phase II study, patients with active UC received either a fully human, monoclonal antibody to CXCL10 or placebo. After 8 weeks, patients receiving anti-CXCL10 exhibited improved clinical and histological responses, suggesting anti-CXCL10 is a potentially effective therapy for moderately-to-severely active UC.

CXCR4 and CXCL12 are expressed by IECs in the normal intestinal mucosa [49-51], contributing to IEC migration, barrier maturation, and restitution [52], via cAMP-mediated cellular functions [53]. However, only recently has CXCR4/CXCL12's presence in intestinal tissue been extended to resident CXCR4+ lamina propria T cells (LPTs), and to the pathogenesis of IBD. We have recently reported that CXCL12 is expressed by normal IECs [54], and that CXCL12 was upregulated in IBD IECs (figure 1). Moreover, autologous biopsies of non-inflamed and inflamed UC mucosa, revealed upregulated CXCL12 in inflamed IECs. Ubiquitous CXCR4 expression by the intestinal mucosa, on both IECs and lamina propria mononuclear cells, was also demonstrated (figure 2). Although CXCR4 was constitutively expressed by both PBT and LPTs, we were able to find upregulated CXCR4 in IECs of IBD patients. Of note, Mikami et al. [55] suggest that CXCL12 is expressed by perivascular cells. These authors did not show epithelial CXCL12 expression, described by us and others in humans and by several groups in mice (49-54). This may be due to the different experimental approach, reagents and model system-specifically murine vs. human, Differences in mouse and human chemokines are widely reported. These differences might reflect either evolutionary pattern changes, or differing biological functions.

Moreover, we showed that CXCL12 is a potent chemoattractant of Th1-biased, memory CD45RO+ peripheral blood T cells (PBTs) and LPTs, without differences between cells from either normal or IBD source [56]. An accumulation of CXCR4+ cells in the vicinity of CXCL12-expressing IECs was observed. Taken together our findings suggest that CXCL12/CXCR4 interactions contribute to mucosal deregulation, specifically of memory CD45RO+ LPTs. Our findings suggest that therapeutic intervention targeting the CXCR4/CXCL12 axis could alleviate inflammation in IBD. Indeed, the potential of CXCR4 antagonists as a therapeutic modality in animal models and human disease was reported by several groups [41, 57, 58].

A third participant in the CXCL12 axis is the newly-discovered receptor CXCR7 [60]. However, despite a tenfold higher affinity of CXCL12 to CXCR7, than to CXCR4 [60, 61]; the precise role of CXCR7 in immune processes is yet unknown. We recently reported that in contrast to the ubiquitous expression of CXCR4 on T cells, only a small percentage of PBTs and LPTs express CXCR7 [56]. However, PBTs, but not LPTs, exhibited upregulated levels of CXCR7 in IBD (figure 3).

As CXCR7 was reported to regulate CXCL12-mediated transendothelial migration [62], it is possible that the increased expression of CXCR7 in the peripheral blood of IBD patients could foster increased influx of T cells to sites of mucosal inflammation. Of note, this hypothesis was not supported when small molecule inhibitors of both these receptors were used to block migration towards CXCL12, and only CXCR4-, but not CXCR7-mediated migration was observed. In accordance with our findings, when CXCL12 was investigated in a mouse model of uveitis, CXCR4, but not CXCR7, was found to be the critical player in induction of remission of the uveitis [35]. Possible roles which have been suggested for CXCR7 are either as a decoy receptor for CXCL12, or as a CXCR4-independent CXCL12 receptor, with a role in cell survival, or integrin activation [61, 63, 64]. Of note, reports in other organ systems emphasized the importance of CXCR7 in CXCL12-mediated immune responses, as a small molecule inhibitor of CXCL12 interaction with both CXCR4 and CXCR7 inhibited chemotaxis of cells and possessed anti-inflammatory activity in the airways. [65].

In conclusion, we reviewed the involvement of CXCL12 in IBD. We delved into the role of CXCR4/CXCR7/CXCL12 in inflammatory diseases, as well as their interactions and effects in IBD. These promising data will hopefully pave the way for future therapeutic interventions for the treatment of IBD.

CXCL12 is expressed by IECs and upregulated in IBD. CXCL12 expression in tissue sections from IBD and normal mucosa (generated from patients undergoing bowel surgeries due to reasons other than IBD, such as colonic tumors or diverticular disease), was evaluated by imunohistochemistry. Paraffin-embedded histopathologic slides were fixed in formalin and stained with primary monoclonal antibody against CXCL12. (A) Low magnification (x4) of normal control (NL), UC, and CD intestine. (B) Distribution along the crypts. (C) Transition zone from less (thin arrow) to more (thick arrow) inflamed mucosa in UC. 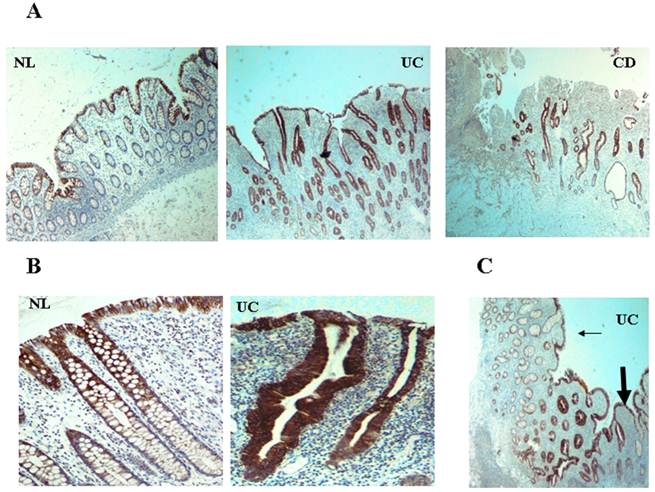 CXCR4 in the intestinal mucosa is expressed by both IECs and mononuclear cells and is upregulated in IBD. (A) Low magnification (x4) slides from normal control (NL), and IBD (UC and CD) mucosa. (B) Representative transitional zone between a non-inflamed (small arrow) to an inflamed (big arrow) area in a UC patient. (C) Intensity of CXCR4 expression by IECs and mononuclear cells was arbitrarily graded by a blinded pathologist from 0 to 3 according to intensity of the CXCR4 staining (0 = lowest and 3 = highest intensity), averaging 3 randomly selected high-power fields. *P ≤0.03, **P≤0.01, and ***P≤0.05 all compared to normal. 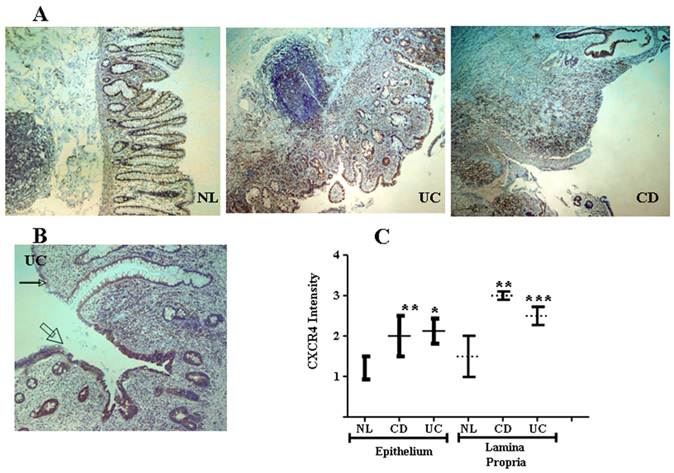