Bibliometric Analysis of Theranostics: Two Years in the Making

With the newly released impact factor from Thomson Reuters, we look at the first two years of the journal Theranostics under the scope of a new bibliometric designed for the analysis of emerging specialties and also for journals with a multidisciplinary approach. With this method, we are able to look at characteristics of an interdisciplinary field or a single journal subject area, and also, the bibliographic trends of their authors. We use this tool to examine authors from the journal Theranostics and compare them to similar authors in the field of theranostics, or theranosticians. Our document and co-citation analysis examines the growth and overlap of established knowledge networks with the incorporation of fields, topics, and disciplines; the quantification can also reflect the intellectual activity in combining leading edge developments in solidly grounded specialties. The quantification of junior authorship aims to gauge the promotion of fresh ideas and scientific development in the community, while productivity of overall authors is measured by citation analysis.

Emerging fields must combine established specialties to define the focus of their research goal and similarly, they must also be organized in an interdisciplinary repository format such as the scientific specialty journal Theranostics. The discoveries, findings and challenges of the published documents with an interdisciplinary goal have furthered our knowledge [1] and have been a great pleasure to read and interpret. The overall effectiveness of a journal covering an interdisciplinary field and analyzing the trends of established journals, must overcome the concerting effort and comprehensive examination of growing fields [2]. With this aim, we look at the first two years of the journal Theranostics under the scope of a new bibliometric for the analysis of emerging specialties and journals with a multidisciplinary approach. With this method, we are able to look at characteristics of a single journal subject area, and also, the bibliographic trends of authors from the journal Theranostics and compare them to similar authors in the field of theranostics, or theranosticians.

Assessment of the field of theranostics and the journal Theranostics was based on direct publication and bibliometric data. All data were collected from PubMed which include publications from NIH-funded research. Data from the journal Theranostics was collected from the date of its inception in January 2011 to February 6, 2013. All multi-authored papers were included as contributions from each respective department, institution, and region to incorporate the multidisciplinary facets. With this information we use the multidisciplinary bibliometric approach to derive keyword footprints, an analysis of multidisciplinary and specialty balance, junior researcher productivity, and individual researcher productivity [3, 4].

Keywords most frequently used in the journal Theranostics were quantified according to frequency, weighted by occurrences and normalized to a scale of 100; the set of authors used is limited to theranosticians funded by NIH. PubMed keyword frequency was analyzed in the same process with results from the NIH Query/View/Report (QVR) system [5]. This subset of keywords was then inversely normalized to a scale of 100. The results were then visualized by frequency of occurrence in Theranostics and the inverse occurrence in PubMed on x- and y-axis, respectively (Figure 1). 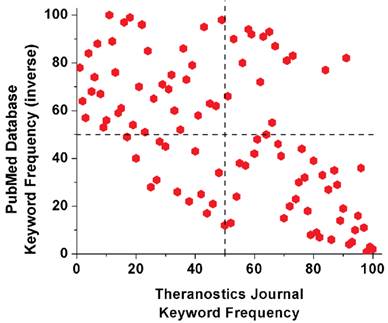 The first quadrant represents topics that occur less in literature but have higher coverage by authors in the journal Theranostics, theranospecific words. The second quadrant contains less popular, less used keywords showing dispersed coverage by both areas. The third quadrant represents the frequency of popular PubMed references to keywords but less theranospecificity. The fourth quadrant highlights high frequency of keyword usage in both Pubmed publications and the journal Theranostics.

From the 597 authors in the last 2 years, Theranostics has a diverse range of studies that were published from broad fields of medical sciences, biological sciences, chemistry, and engineering with many specialized fields such as nuclear medicine, molecular imaging, and nano sciences (Table 1). The top fields that contributed were also diverse in landscape as shown by the top 5 areas: molecular imaging, medical sciences, nuclear medicine, biomedical engineering, and pharmaceutical sciences [6]. In addition, many of the authorships were associated with multiple departments and areas of study exemplifying the mixture of both multidisciplinary approach and balance of specialties. It is also worth noting that authors came from a total of 91 institutions in 19 countries. For analysis, the discipline of primary investigators was determined by department affiliation and quantified. The location of the author was determined by institute affiliation at time of publication.

Specialty research areas represented in the journal Theranostics come from diverse individual specialties and from both combined research disciplines and collaborative works. 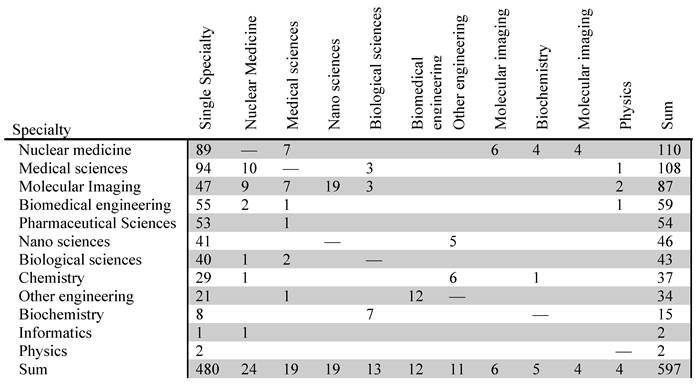 Each author of the manuscripts published in Theranostics was analyzed. Total number of publications was collected from PubMed and categorized with the earliest publication by the author. Authors were defined as all individuals listed on the manuscript authorship list. Corresponding authors were defined as primary and co-corresponding authors. The analysis for unique identities is accomplished by identifying authors with their specific institution to reduce search results of authors with similar names, and produces a limitation to the publications from previous institute affiliations. A reverse percentile (RP) calculation scores publications based on the normalized ranking of journals where higher impact factors are in the higher percentiles. This method is a useful indicator of reflecting involvement and productivity but reduces impact factor weighting.

To investigate productivity of junior researchers among the author group from the journal Theranostics, we took samples from whole data set. 239 of the established researchers were randomly chosen and were analyzed and found to have published on average 15 papers with an average impact factor (IF) of 5.7 and reverse percentile of 62.8. Likewise 111 selected junior researchers had averaged 3 papers with an average IF of 6.7 and RP of 77. IF scoring is influenced by high IF journals that cover general areas, and this type of scoring is not always reflective of research productivity, especially in a specialty field. RP scoring reflects specialties as a counterpart to IF scoring. With the inclusion of RP scoring, it can be seen that the junior researchers group published in more qualified journals for their specialty. The rate of change for the summation of impact factors (IFS) in 2012 compared to the average of the last 5 years (2007-2011) is 1.71, from 158 established researchers, and 1.59, from 43 junior researchers. In the case of the summation of reverse percentiles (RPS), the rate of change (CR) was 1.62 and 1.59, respectively. The latter case shows the reduced scoring for the established research group that narrows the gap between the two author groups.

To measure individual productivity, two sets of authors were analyzed; the 597 publications from the authors of the journal Theranostics (TAJ) were compared to the authors that used the term theranostics (including derivations e.g. theragnostics, theranosis or theragnosis) as a keyword in their publication, termed authors in the theranostics field (TAF). TAF group published 5111 papers in 745 journals (or neighboring journals to the journal Theranostics). Of those, 4022 papers are published in 609 Science Citation Information (SCI) journals. Authors were analyzed by examining all publications and weighted by journal SCI impact factor [7].

The number of authors in the second subset that used the keyword theranostics (TAF) was similar to the number of Theranostics journal authors (TAJ). Overall, TAJ, as compared to TAF, published more in SCI-rated journals, had a higher number of SCI papers per person, and had a slightly higher aggregate impact factor on publications (Table 2). TAF had a higher average impact factor and published more after 2010, after the inception of the journal Theranostics. An interesting side note is that TAJ had an overall trend of publishing in the journal Bioconjugate Chemistry while TAF preferred the journal Biomaterials; the most commonly published journals by the authors or close neighboring journals for TAJ are the Journal of Bioconjugate Chemistry and the Journal of Nuclear Medicine.

The multidisciplinary analysis examines research productivity during the most recent 12 years scored with Reverse Percentile Summation. This method shows slightly higher scoring than Impact Factor Summation based on specialty of authors in the field of theranostics with the authors in the journal Theranostics. The scoring also follows the overall increase in publications in the specialty field of theranostics overall. 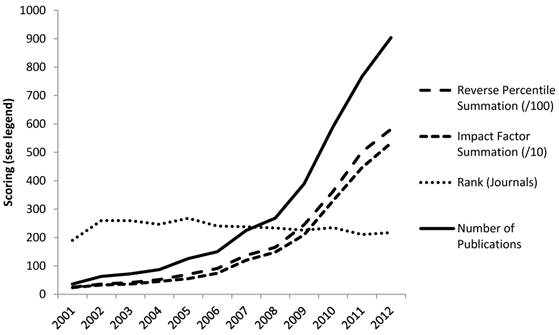 Our bibliographic and multidisciplinary analysis aligns squarely with many of the stated goals of Theranostics in their inaugural commentary [3]. Our document and co-citation analysis examines the growth and overlap of established knowledge networks with the incorporation of fields, topics, and disciplines; the quantification can also reflect the intellectual activity in combining leading edge developments in solidly grounded specialties. The frequency and variance of region, discipline background, keywords and topics represent the interests of the field and current publications. The quantification of junior authorship aims to gauge the promotion of fresh ideas and scientific development in the community, while productivity of overall authors is measured by citation analysis.

With the recent issuance of the journal Theranostics' impact factor of 7.8 [8], we look at the determination and value of the impact factor score. The analytical derivation of the impact factor produces a score from the number of citations in a given year for publications in the previous two years and compares them to the total citable items the journal published in those past year two years. Within this impact factor score, journals that are evaluated contain a mix of publications from highly established disciplines and more recent, exciting or breaking areas of research. For the specific field, the journal Theranostics represented specialties such as molecular imaging, nuclear medicine, and nanotechnology and proceeds to frame them for theranostic applications. Although the impact factor is a useful tool for gauging individual journal productivity, the use of impact factor is also not a gauge for individual or research productivity [9] and we move away from these numbers in the reverse percentile rankings for this analysis. In this way, impact factor inflation is mitigated, and key areas can be examined in their relation to the area theranostics. This method could be applied to extrapolate the previously mentioned research fields individually or examine another multidisciplinary field with a similar approach.

In addition, the relevancy of articles in a single journal should also be considered. For our metrics of examining the multidisciplinary field of theranostics, we were able to derive theranosticians in neighboring journals and examine them in both the multidisciplinary field and individual contributions. The emphasis on looking solely at impact factor scoring can cause perceptions that lead to impact factor inflation and bias; these are mitigated by incorporating a ranking system that removes the impact factor score and by examining keywords across multiple journals.