The confluence of therapeutics and diagnostics based on the advantages of nanotechnology offers significant opportunities for personalized and precision medicine. Intelligent nanotheranostics based on bioresponsive systems have recently emerged and offer the promise of high specificity and efficiency via “on-demand” activation of both therapeutic and diagnostic capabilities.

Almost two decades since the first use of the term “theranostics” in the late 20th century, efforts to develop more efficient individualized treatment strategies with fewer side effects and better patient outcomes via an “all-in-one” approach have evolved to encompass a broad range of fields. These include molecular imaging/therapeutics, image-guided therapy, personalized medicine, biosensors, and translational medicine [1-3]. Nanotheranostics provides an unprecedented opportunity to integrate various components along with customized therapeutic agents, controlled-release mechanisms, targeting strategies, and reporting functionality for therapeutic detection/visualization within a nano-scaled architecture. Until recently, nanotheranostic systems were designed to respond to specific stimuli including changes in the external physical environment (e.g., light, temperature, ultrasound, magnetic field, and electric field) or internal biological cues (e.g., pH, redox, hypoxia, enzymes, nucleic acids, and other ions/small biomolecules) [4-8]. Emerging “smart” or “intelligent” bioresponsive nanotheranostics are engaged by the biological milieu or pathological phenomena in disease sites as triggers for “on-demand” simultaneous control of both therapeutic activation and signal generation.

An analysis of the current literature using Google Scholar was performed to identify relevant stimuli-responsive nanotheranostics. We retrieved 9,930 publications from year 2000 to year 2016. Three quarters (75.1%, n=7,460) of the publications were relevant to bioresponsive nanotheranostics, whereas the remaining quarter (24.9%, n=2,470) dealt with physical stimuli. pH is the most frequently studied stimulus, accounting for approximately 46% of all publications. Light was the second-most common stimulus at 11.5%. These were followed by redox-, enzyme- and temperature-responsiveness at 10.3%, 10.2%, and 9.0%, respectively. Other categories such as ultrasound, magnetic fields, electric fields, hypoxia, nucleic acids, and ions/biomolecules continue to expand.

The human body is a complex system of cells containing nucleic acids, enzymes, and biomolecules in various physiological environments. Thus, the development of bioresponsive nanotheranostics requires a deep understanding of the pathophysiological features of many distinct types of diseases. For instance, malignant tumors demonstrate unique changes in blood flow, pH gradient, specific enzyme expression levels, oxygen, ATP, lactate content, reactive oxygen species (ROS), reactive nitrogen species (RNS), as well as glucose and glutathione concentrations. These biological alterations and various other biological stimuli can be used to design smart nanotheranostics [6, 7]. Recently, increasing attention has been given to the development of nanotheranostics based on endogenous stimuli with high specificity and high efficiency. In particular, enzyme-cleavable moieties, nucleic acid-mediated switches, and biomolecule-triggered conformational changes have shown great promise for the next generation of theranostic agents (Figure 1). 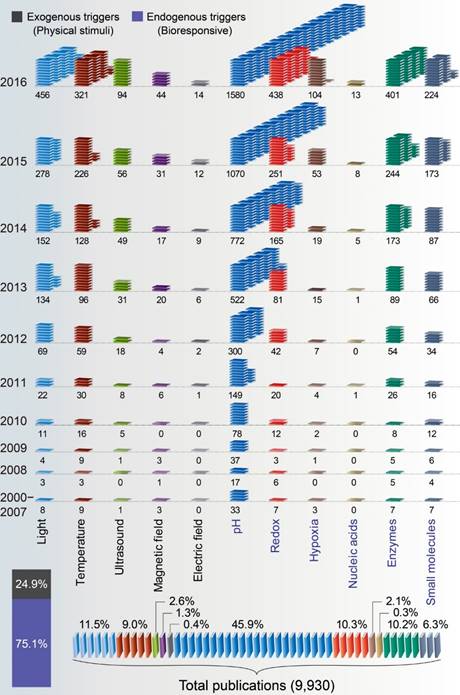 Due to the high selectivity, specificity, and rate enhancements associated with enzymes that participate in biological processes, dysregulated enzymes in certain diseases have recently been recognized as promising bioresponsive triggers for smart nanotheranostic applications. In general, enzyme-responsive systems are mainly initiated by the cleavage of peptide substrates, esters, and glycosidic bonds via hydrolases. Other enzymes such as oxidoreductases and transferases have also been identified for prodrug delivery. Therapeutic and signal activation can be achieved by relying on a specific enzyme to direct release/activation and physicochemical alternations (e.g., disassembly/ reassembly, morphology switch and charge conversion, etc.).

In a recent study, enzyme-responsive nanotheranostic agents based on the upconversion of rare-earth nanostructure (UCN) were successfully created (Figure 2, a1) [9]. The system involved disassembly and reassembly of the peptide-pre-modified nanostructure for simultaneous activation of photodynamic therapeutic (PDT) and upconversion luminescent signal enhancement. Here, an enzyme-cleavable peptide sequence, Ac-FKC(StBu)AC(SH)-CBT, was designed as an activatable moiety that is specifically cleaved by lysosomal enzyme cathepsin B to expose a free cysteine thiol group, which in turn easily undergoes a condensation reaction with the -CN moiety in the CBT structure from neighboring particles. This triggers in situ crosslinking mediated by localized accumulation of nanocrystals in cancerous cells.

This approach not only simultaneously enhances upconversion of the luminescent signal and amplifies singlet oxygen generation from the Ce6 photosensitizer attached to the nanoparticles, but also induces a luminescence color shift and photoacoustic signal alteration. In addition, by taking advantage of 808-nm laser irradiation, cathepsin B triggered cross-linking-mediated theranostic application of UCN, as further validated in live animals.

Schematic illustration of the mechanisms of emerging bioresponsive systems for theranostic applications. a1) A tumor-specific, protease-induced covalent cross-linking of peptide-protected upconversion nanocrystals for enhanced fluorescence emission and photodynamic therapy. a2) A polymeric nanoparticle incorporating an esterase-cleavable pro-drug and a caspase-3-cleavable reporter element. Once the NP is inside the drug-sensitive cell, the release of drug initiates apoptosis through the activation of caspase-3 enzyme, which mediates the fluorescence recovery. b1) PDA-coated iron oxide nanoparticles decorated with dye-labeled hpDNAs in the quenched state. After the nanoparticles reach the cytoplasm, target mRNAs specifically bind the hpDNAs and detach from the nanoparticles with recovery of fluorescence signal. b2) An activatable DNA motif integrated with reporter substrates was grafted onto the surface of the silica-coated gold nanorods, and the binding between the target miRNAs and DNA motif led to conformational rearrangement and subsequently activated the catalytic cleavage of fluorophore-labeled substrate strands, which amplified the signal. c1) A nanovehicle comprised of ATP-binding aptamer-incorporated DNA motif loaded with doxorubicin. The high concentration of ATP in tumor cells competitively bound the ATP aptamer, resulting in a conformational change from duplex to aptamer, releasing the intercalated doxorubicin. c2) An in situ biomolecule-responsive system boosted cancer nanotheranostics via intracellular GSH and H2O2 and triggered reassembly of the MnO2/DVDMS nanosheets into a Mn2+ and DVDMS supramolecular nanomixture. 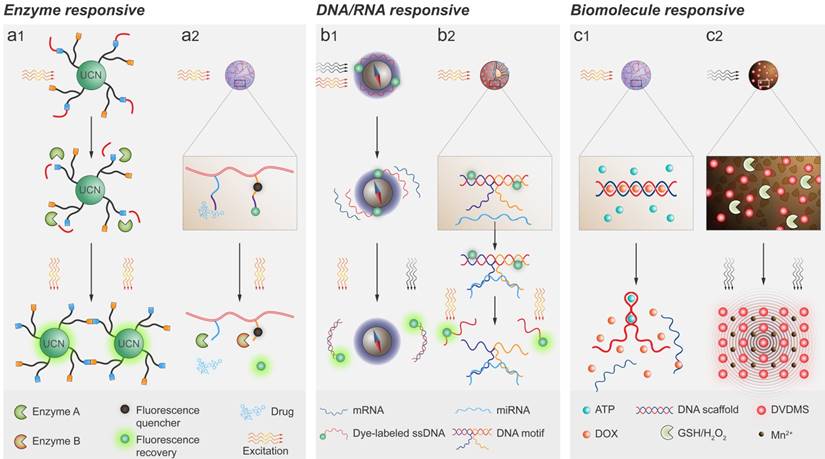 In another example, dual enzyme-responsive systems were incorporated into a theranostic nanoparticle (Figure 2, a2) [10]. In one component, an effector (i.e., a chemotherapeutic or immunetherapeutic agent) was conjugated to the polymeric backbone through an esterase-cleavable linker, which serves as a direct trigger for drug release. In another component, the reporter comprising a Förster resonance energy transfer (FRET) pair of a fluorophore and quencher was attached onto the polymeric backbone via a cross-linker. The caspase 3 cleavable sequence consisted of L-amino acids GKDEVD-APC-CONH2 [10]. Here, the cleavage of the DEVD substrate (its later pair, APC-CONH2, is attached with the fluorophore) results in liberation of fluorophore and recovery of the fluorescent signal. For in vivo validation, the self-assembled theranostic nanoparticles were intravenously injected into a xenograft mouse model and passively targeted to the tumor via the EPR effect.

These nanoparticles were spontaneously internalized by two types of cells. The first are drug-sensitive cells that initiate drug release by disease-specific esterase-mediated cleavage and induced apoptosis via the activation of caspase 3 enzyme. This is followed by de-quenching of the fluorescent signal. The other type are non-responder cells in which the programmed esterase-mediated initiation is restrained and thus there is no theranostic feedback. Remarkably, this system allows for simultaneous programmed delivery of a therapeutic agent and real-time monitoring of therapeutic efficacy via drug-induced apoptosis with fluorescence enhancement. Furthermore, this strategy could be expanded into other emerging therapeutics such as immunotherapy.

In addition to enzyme-responsive systems, nucleic acids (i.e., DNAs or RNAs) have emerged as bioresponsive switches for specific hybridization interactions due to their unique sequences [11]. One strategy is to use fluorophore-labeled single-stranded DNA (ssDNA) as an activatable probe for messenger RNA (mRNA) detection in vivo. For example, the dye-labeled hairpin ssDNAs (hpDNAs) could be deposited on the surface of polydopamine (PDA)-coated iron oxide nanoparticles, effectively quenching the fluorescence of the dye (Figure 2, b1). After the iron oxide nanoparticles reach the cytoplasm, the target mRNAs could specifically bind with a dye-labeled ssDNA probe and spontaneously disassemble from the iron oxide nanoparticles. This would result in activation of the fluorescent signal [12].

Notably, PDA-coated Fe3O4 nanoparticles not only absorb NIR fluorescence but also act as photoacoustic imaging and photothermal agents due to absorption within a wide range of wavelengths. Moreover, iron oxide nanoparticles provide T2-weighted MRI monitoring. In fact, mussel-inspired PDA plays a pivotal role in integrating multiple functional components. Another novel strategy for multiplexed detection and programmed drug release relies on microRNA (miRNA)-induced conformational changes of multicomponent nucleic acid enzymes (MNAzymes) (Figure 2, b2) [13]. In this approach, an activatable DNA motif consisting of two parts of the MNAzyme with mismatched reporter substrates was grafted onto the surface of silica-coated gold nanorods. The binding between the target miRNAs and DNA motif led to conformational rearrangement and subsequently activated the catalytic cleavage of fluorophore-labeled substrate strands. This resulted in signal amplification via the detachment of the reporter substrate from the fluorescence quencher. Meanwhile, the conformational change of the DNA motif also served as a gatekeeper for controlled release of chemotherapeutic agents.

In addition to specific macromolecules, small biomolecules such as ATP and GSH have also been exploited as biological triggers for stimuli-responsive theranostic applications. Recently, a nano-vehicle comprising an ATP-binding aptamer-incorporated DNA motif loaded with chemotherapeutic agents, m-protamine and polysaccharide cross-linked shell, was developed for “on-demand” release of drugs depending on the ATP level (Figure 2, c1) [14]. The DNA scaffold was composed of ATP aptamer and its complementary cDNA. The positively charged protamine was employed for nanostructure stabilization and cellular/intracellular trafficking. The outer shell was HA, which facilitated receptor-mediated endocytosis. In principle, the high concentration of ATP in tumor cells competitively binds the ATP aptamer, resulting in a conformational change from duplex to aptamer, which releases the intercalated doxorubicin. Yet another biomolecule-responsive system is based on non-protein reducing agents such as GSH in the cytoplasm of cancer cells. Finally, an in situ biomolecule-responsive system for cancer nanotheranostics was created by intracellular GSH- and H2O2-triggered reassembly of MnO2/DVDMS nanosheets into a Mn2+ and DVDMS supramolecular nanomixture [15] (Figure 2, c2). These nanoparticle/ion molecular transformations not only enhanced the PDT and PTT properties of DVDMS (a photosensitizer), but also accompanied signal amplification of MRI and photoacoustic imaging.

Although these select works represent recent laboratory breakthroughs, their impacts on clinical practice remain limited [16, 17]. To achieve the success in clinical translation, several potential limitations need to be considered: 1) Usually the pathological biomarkers for stimuli responsiveness are appeared in the low concentration range. Thus the amplification of bio-sensitivity for a variety of stimuli is essential to provoke a desired response from the bioresponsive materials. 2) Sometimes there are inconsiderable differences in biological milieu (such as pH and temperature) between normal and diseased tissues. Thereby, high specificity or multiple stimuli could be the solution to promote responsive behavior. 3) The levels of pathological cues may be considerably inconsistent between animal models and humans, and accurate simulations of the human situation are crucial for clinical translation. 4) Bioresponsive nanotheranostic systems often involve complex chemical synthesis and modifications, which could be a hurdle for large-scale production, leading to undesired effects in humans. It is expected in the near future that more sophisticated bioresponsive nanotheranostic systems will be approached by minimalist design using off-the-shelf biomaterials. The improvement of response sensitivity and specificity, as well as spatiotemporal controllability will bring nanotheranostics closer to clinical translation. Nevertheless, at the frontier of biology-inspired engineering, the simultaneous activation of diagnostic and therapeutic effects not only detects, monitors, and localizes targets, but also allows real-time assessment of therapeutic efficacy [18]. This approach relies on endogenous triggers such as enzymes, nucleic acids, ions, and small biomolecules; nanotheranostics could significantly shorten the extensive procedures involved in indirect post-therapeutic evaluation, which includes molecular tests and anatomic measurements. Thus, the next generation of nanotheranostics is soon likely to yield a much deeper understanding of nanomedicine in vivo, culminating in more accurate prediction of therapeutic outcomes in human patients.