Methods: The effects of CXCR3 on mitochondrial function were evaluated by genetic knockout or pharmacological inhibition in mouse models and in vitro. The ultrastructural changes of mitochondria were assessed by transmission electron microscopy (TEM). Hepatic levels of mitochondrial reactive oxygen species (ROS), DNA damage, membrane potential and ATP were examined.

Non-alcoholic fatty liver disease (NAFLD) is the most common chronic liver disease worldwide. Non-alcoholic steatohepatitis (NASH) is a more severe form of NAFLD that is characterized by lobular inflammation, hepatocellular ballooning, and fibrosis with an inherent risk of progression to end-stage hepatocellular carcinoma (HCC) (1). Although the mechanisms of NASH progression have not been fully understood, accumulating evidence revealed a pivotal role of mitochondrial dysfunction in the development of steatohepatitis (2, 3). Mitochondria are the primary cellular organelles for the oxidation and metabolism of fatty acid and glucose. Mitochondrial dysfunction not only impairs fat homeostasis in the liver but also leads to the accumulation of reactive oxygen species (ROS) that trigger lipid peroxidation, cytokine overproduction and cell death. Abnormal morphologic changes and increased production of ROS in liver mitochondria have been observed in patients and animal models with NASH (4, 5). However, the molecular mechanisms underlying the regulation of mitochondria in the pathogenesis of NASH are still largely unclear.

Chemokines are ubiquitous chemotactic molecules that play major roles in acute and chronic inflammatory conditions (6). CXC chemokines are the largest families, members of which are expressed in acutely inflamed and fibrotic livers (7). CXCR3 is a G protein-coupled receptor of cytokine CXCL10, CXCL11 and CXCL9, and is essential in chronic liver inflammation (8, 9). CXCR3 is highly expressed in T lymphocytes, monocytes/macrophages and resident cells (Kupffer cells, hepatocytes and hepatic stellate cells) (10, 11). It could promote lipid accumulation, inflammatory cell infiltration and endoplasmic reticulum (ER) stress in the development of steatohepatitis (12). However, whether CXCR3 could act as a key regulator of mitochondrial dysfunction in NASH development is still unknown. In this study, we explored the effect and molecular mechanisms of CXCR3 on mitochondrial dysfunction during the progression of NASH using CXCR3 knockout (CXCR3-/-) mouse model and hepatocytes cell line models. Here we demonstrate for the first time that CXCR3 impairs mitochondrial integrity and function in the development of nutritional steatohepatitis through the induction of mitochondrial ROS, mitochondrial DNA damage and mitochondrial-related apoptosis. We show that the elimination of CXCR3 by genetic depletion or drug antagonists could restore mitochondrial integrity and therefore its function in NASH.

All animals were maintained in an environmentally controlled facility with diurnal light cycle and free access to water. All animal studies were performed in accordance with guidelines approved by the Animal Experimentation Ethics Committee of the Chinese University of Hong Kong.

Mitochondrial ultrastructure in mouse liver was evaluated using transmission electron microscopy (TEM). Liver was dissected and fixed in 2.5% glutaraldehyde for 2 h at 4°C, post-fixed in 1% osmium tetroxide for 1 h at 4 °C, dehydrated, and embedded in epoxy resin. The tissue was sliced using an ultramicrotome (RMC/MTX; Elexience). Ultrathin sections (60-80 nm) were mounted on copper grids, contrasted with 8% uranyl acetate and lead citrate, and observed with a Philips CM100 transmission electron microscope equipped with a TENGRA 2.3K X 2.3K TEM camera. Analysis was performed with the Soft Imaging System.

Isolation of mitochondria from liver tissue

Mouse immortalized hepatocytes AML-12 were cultured in DMEM/Ham's F12 supplemented with 10% fetal bovine serum (FBS), a mixture of insulin-transferrin-selenium (ITS), 0.1 mM dexamethasone, penicillin and streptomycin. Human hepatocytes HepG2 were cultured in DMEM supplemented with 10% FBS, penicillin and streptomycin. The cells were maintained under a humidified atmosphere of 95% air and 5% CO2 at 37 °C. They were routinely subcultured using trypsin- ethylenediaminetetraacetic acid every 5-7 days. AML-12 cells were exposed to control medium or DMEM/F12 medium deficient in methionine and choline (MCD medium) for 24 h. HepG2 cells were treated with 200 μM palmitic acid or bovine serum albumin (BSA) control for 24 h.

Knockdown of CXCR3 by siRNA transfection

Double-stranded siRNA oligonucleotides for CXCR3 (GenePharma, Shanghai, China) were transfected using Lipofectamine 2000 (Thermo Fisher Scientific) as recommended by the manufacturer (Thermo Fisher Scientific). The sense and antisense sequences of the siRNA are as follows: Mouse siCXCR3-1: 5'- GGAUUUCAGCCUGAACUUUTT-3' (sense), 5'-AAAGUUCAGGCUGAAAUCCTT-3' (antisense); Mouse siCXCR3-2: 5'- GCUAGAUGCCUCGGACUUUTT-3' (sense), 5'-AAAGUCCGAGGCAUCUAGCTT-3' (antisense); Human siCXCR3-1: 5'- CCUUCCUGCUGGCUUGUAUTT-3'(sense),5'-AUACAAGCCAGCAGGAAGGTT-3' (antisense); Human siCXCR3-2: 5'- GGUCAUGGCCUACUGCUAUTT -3' (sense), 5'- AUAGCAGUAGGCCAUGACCTT-3' (antisense). AML-12 and HepG2 cells were plated with 70-90% confluent in 6-well plate at the time of transfection. 5 μL Lipofectamine 2000 (Thermo Fisher Scientific) was diluted in 250 μL Opti-MEM Medium and siRNA plasmid was diluted into 250 μL Opti-MEM medium. The diluted DNA plasmid was then added to the diluted Lipofectamine 2000 and incubated for 20 min. After that, the plasmid-lipid complex was dispensed into plates. Fresh medium was added 6 h after transfection. Cells were treated with MCD medium or palmitic acid 48 h after transfection and processed for immunofluorescence or protein extraction 72 h after transfection.

AML-12 and HepG2 hepatocytes were plated on coverslips and stained with MitoTracker red (Thermo Fisher Scientific). After washing twice with PBS, the cells were fixed with 4% paraformaldehyde in PBS for 15 min and then washed three times with PBS. Cell images were captured with an LSM 510 Zeiss confocal microscope (ZEISS, Göttingen, Germany) equipped with a 63x oil immersion objective and data were analyzed using LSM Meta software.

Mitochondrial membrane potential (ΔΨm) was assessed by tetramethylrhodamine ethyl ester (TMRM) (Thermo Fisher Scientific), a specific fluorescent cationic dye that is readily sequestered by active mitochondria, depending on their transmembrane potential. AML-12 and HepG2 were treated with MCD medium and palmitic acid, respectively, for 24 h. Cells were then incubated with 10 nM TMRM for 30 min at 37 °C. The fluorescence levels were analyzed by flow cytometry.

Cells were incubated with TMRM fluorescent dye for 20 min and washed with PBS. For the quantification of TMRM, the stained cells were collected by trypsinization, and the fluorescence intensities were measured by Accuri C6 cytometer (BD Biosciences, Franklin Lakes, NJ). The live cells were gated using forward scatter (FSC) and side scatter (SSC). The debris and dead cells with low FSC and high SSC were excluded. The presented results are the average of at least three independent experiments.

ATP levels of cells were determined by ATP Colorimetric/Fluorometric Assay kit (ab83355, Abcam, Hong Kong) for mitochondrial dysfunction. Measurements were performed with the colorimetric assay, following the manufacturer's instructions, on 106 cells. ATP contents were measured in triplicate and expressed as % control.

Quantitative analyses using cultured cells are represented as histograms. Values were obtained from three independent experiments, and expressed as mean ± standard deviation (SD). Statistical analysis was carried out using one-way ANOVA or Student's t test, with P < 0.05 considered as significant. All statistical data were calculated with the SPSS 17.0 software. 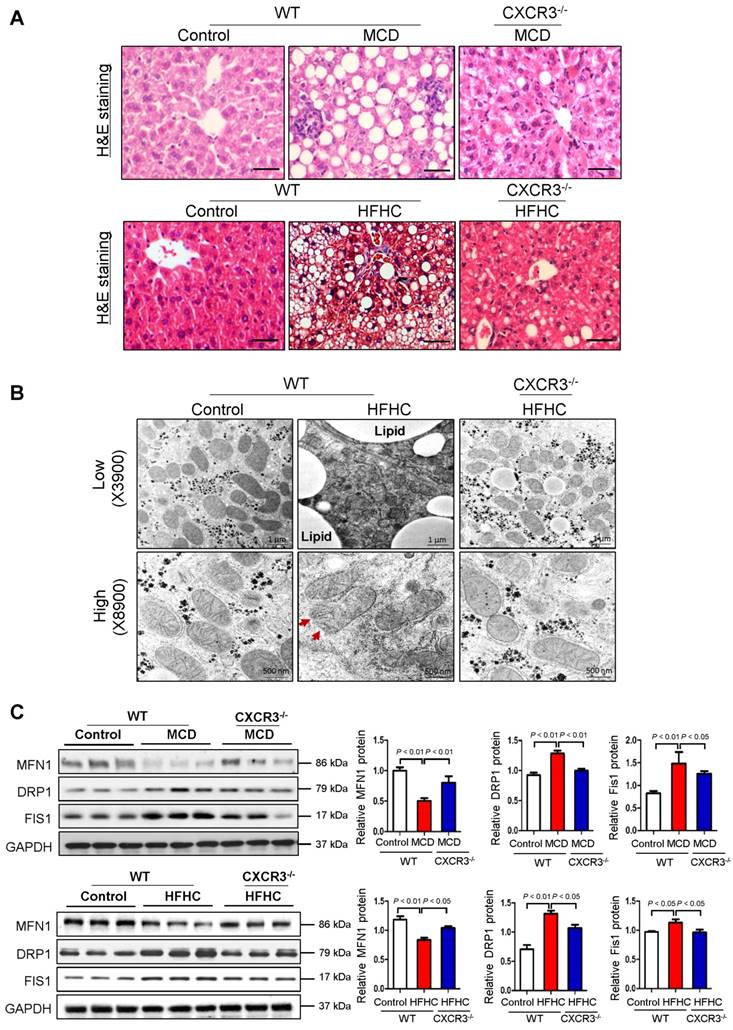 Mitochondria are pivotal in controlling cell death through the regulation of mitochondrial intrinsic apoptosis pathway. To identify the molecular mechanism for the mitochondrial dysfunction induced by CXCR3 in steatohepatitis, we examined hepatic apoptosis in liver tissues from WT and CXCR3-/- mice. As shown in Figure 4A, the hepatic protein expressions of ASK1, p-JNK, p-c-Jun, cleaved caspase 3, and cleaved PARP were upregulated in WT mice fed with MCD diet, while these inductions were abolished by CXCR3 knockout. Similarly, the protein expression of p-JNK, cleaved caspase 3, and cleaved PARP was suppressed in HFHC-fed CXCR3-/- mice compared to HFHC-fed WT mice (Figure 4B). These results suggest that CXCR3 deficiency prevents caspase-dependent apoptosis in dietary steatohepatitis. 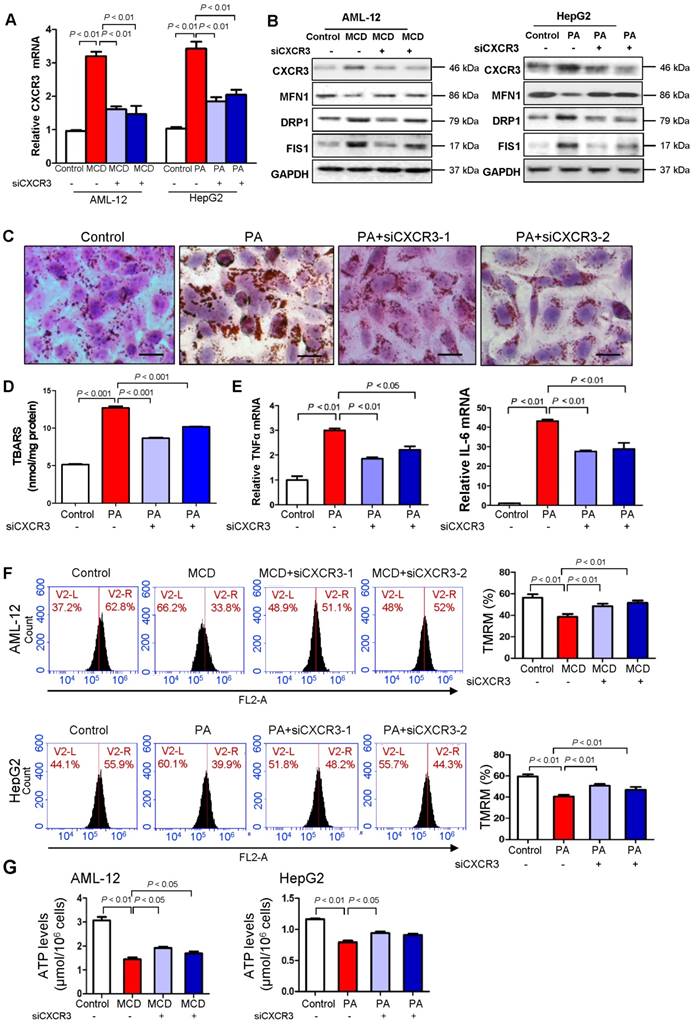 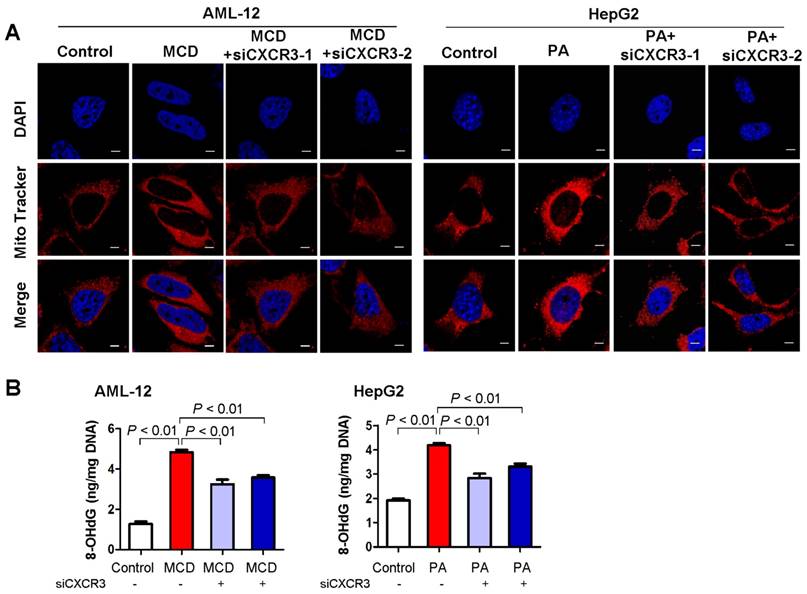 Apart from the ASK1/JNK pathway, caspase-dependent apoptosis could also be caused by the formation of apoptosome-containing adaptor Apaf-1, which could bind to Cyt c after its release from mitochondria to cytoplasm (18). We found that hepatic accumulation of Apaf-1 was significantly reduced in MCD-fed CXCR3-/- compared to MCD-fed WT mice (Figure 4A). To determine whether CXCR3 could inhibit the release of Cyt c from mitochondria, we isolated mitochondria from liver tissues of MCD-fed WT and CXCR3-/- mice. Our result showed that Cyt c expression increased in the mitochondria and decreased in the cytoplasm in CXCR3-/- mice compared to WT mice (Figure 4C), suggesting the decreased release of Cyt c from mitochondria to cytosol by depletion of CXCR3. 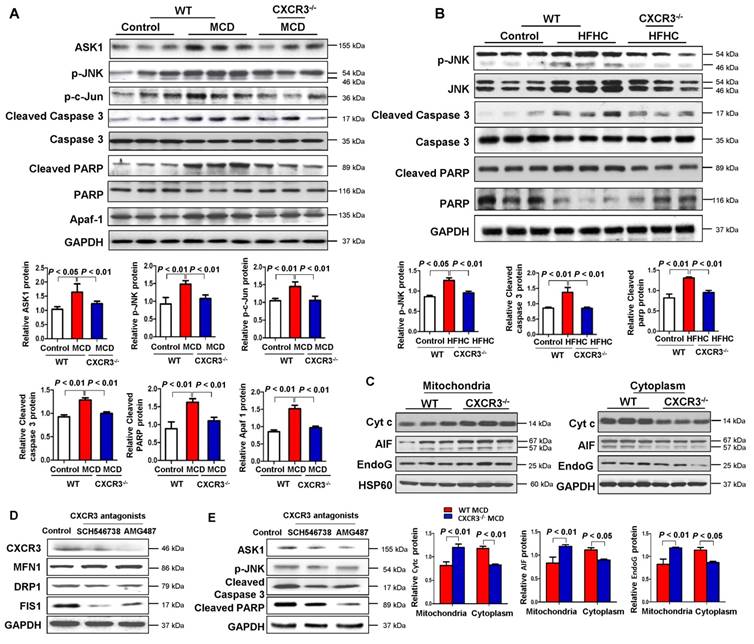 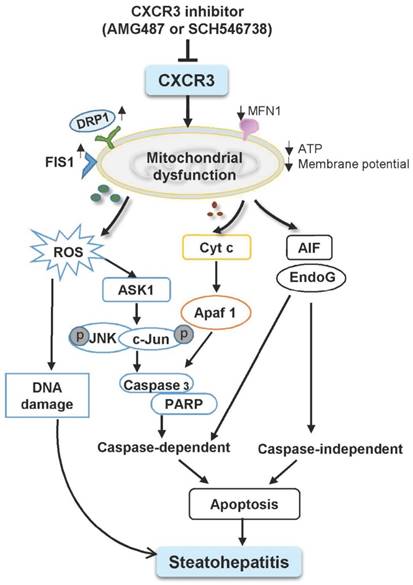 Mitochondria have been shown to be the target of many pro-apoptotic proteins (31) and play a crucial role in apoptosis through the regulation of apoptotic cascade. The present study showed that JNK activation increased the leakage of Cyt c from mitochondria to the cytosol and activated caspase 3 “cell execution pathway”. Deficiency of CXCR3 reduced caspase-dependent apoptosis in both dietary steatohepatitis mouse models. Moreover, mitochondrial dysfunction induced the release of AIF and EndoG from mitochondria to cytosol. AIF and EndoG are mitochondrial proteins that mediate caspase-independent apoptosis in a number of models after translocation into the cytosol or into the nucleus (32, 33). When AIF and EndoG were released from the mitochondria in response to apoptotic stimuli, they became active executioners of the cells by causing condensation of chromatin in the nuclei and large-scale fragmentation of DNA (34, 35). These processes were significantly blunted by CXCR3 deficiency, suggesting the effect of CXCR3 deletion in inhibiting caspase-independent apoptosis in steatohepatitis. These findings collectively reveal that CXCR3 deficiency could prevent non-alcoholic steatohepatitis through both caspase-dependent and caspase-independent apoptosis signaling pathways (Figure 5).

JD and XZ were involved in study design, experiments conduct, and data analysis; JH, YZ and ESHC performed the experiments; KM provided material support; YN commented on the study; JY designed, supervised the study and wrote the paper. All authors reviewed the manuscript.

All experiments protocols were approved by the Chinese University of Hong Kong.

17. Kasai H. Analysis of a form of oxidative DNA damage, 8-hydroxy-2'-deoxyguanosine, as a marker of cellular oxidative stress during carcinogenesis. Mutat Res. 1997;387:147-163