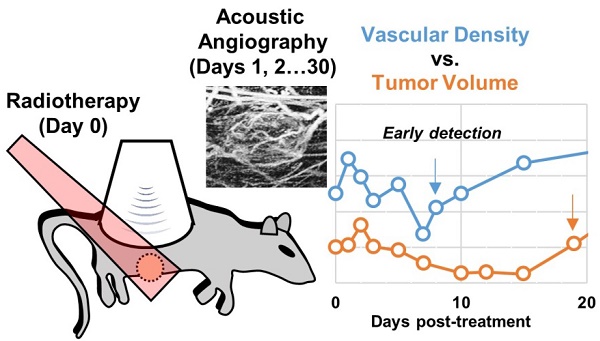 Measuring changes in tumor volume using anatomical imaging weeks to months post radiation therapy (RT) is currently the clinical standard for indicating treatment response to RT. For patients whose tumors do not respond successfully to treatment, this approach is suboptimal as timely modification of the treatment approach may lead to better clinical outcomes. We propose to use tumor microvasculature as a biomarker for early assessment of tumor response to RT. Acoustic angiography is a novel contrast ultrasound imaging technique that enables high-resolution microvascular imaging and has been shown to detect changes in microvascular structure due to cancer growth. Data suggest that acoustic angiography can detect longitudinal changes in the tumor microvascular environment that correlate with RT response.

Methods: Three cohorts of Fisher 344 rats were implanted with rat fibrosarcoma tumors and were treated with a single fraction of RT at three dose levels (15 Gy, 20 Gy, and 25 Gy) at a dose rate of 300 MU/min. A simple treatment condition was chosen for testing the feasibility of our imaging technique. All tumors were longitudinally imaged immediately prior to and after treatment and then every 3 days after treatment for a total of 30 days. Both acoustic angiography (using in-house produced microbubble contrast agents) and standard b-mode imaging was performed at each imaging time point using a pre-clinical Vevo770 scanner and a custom modified dual-frequency transducer.

Conclusions: In this feasibility study we have demonstrated the ability of acoustic angiography to detect longitudinal changes in vascular density, which was shown to be a potential biomarker for tumor response to RT.