Systematic Assessment of Strategies for Lung-targeted Delivery of MicroRNA Mimics 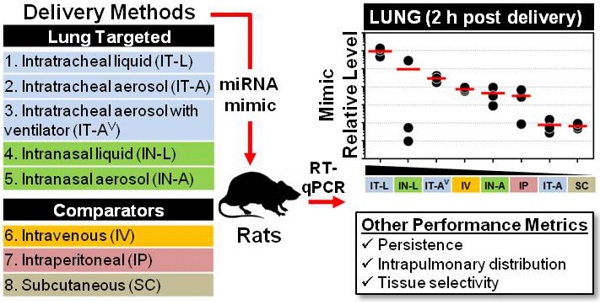 There is considerable interest in the use of synthetic miRNA mimics (or inhibitors) as potential therapeutic agents in pulmonary vascular disease; however, the optimal delivery method to achieve high efficiency, selective lung targeting has not been determined. Here, we sought to investigate the relative merits of different lung-targeted strategies for delivering miRNA mimics in rats.

Results: At 2 h post delivery, IT-L showed the highest lung mimic level, which was significantly higher than levels achieved by all other methods (from ~10- to 10,000-fold, p<0.05). Mimic levels remained detectable in the lung 24 h after delivery, but were 10- to 100-fold lower. The intrapulmonary distribution of cel-miR-39 was comparable when delivered as either a liquid or aerosol, with evidence of mimic distribution to both the left and right lung lobes and penetration to distal regions. All lung-targeted strategies showed lung-selective mimic uptake, with mimic levels 10- to 100-fold lower in heart and 100- to 10,000-fold lower in liver, kidney and spleen. In contrast, IV, SC and IP routes showed comparable or higher mimic levels in non-pulmonary tissues.

Conclusions: miRNA uptake in the lungs differed markedly by up to 4 orders of magnitude, demonstrating that the choice of delivery strategy could have a significant impact on potential therapeutic outcomes in preclinical investigations of miRNA-based drug candidates.