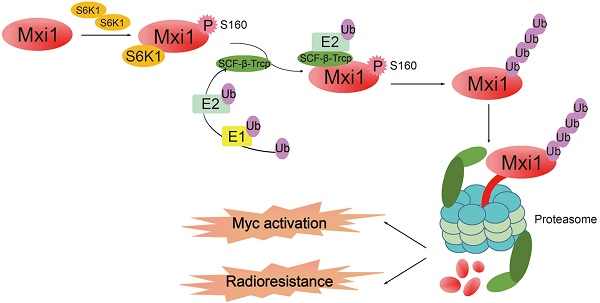 Rationale: Mxi1 is regarded as a potential tumor suppressor protein that antagonizes the transcriptional activity of proto-oncogene Myc. However, the clinical significances and underlying mechanisms by which Mxi1 is regulated in lung cancer remain poorly understood.

Methods: Mass spectrometry analysis and immunoprecipitation assay were utilized to detect the protein-protein interaction. The phosphorylation of Mxi1 was evaluated by in vitro kinase assays. Poly-ubiquitination of Mxi1 was examined by in vivo ubiquitination assay. Lung cancer cells stably expressing wild-type Mxi1 or Mxi1-S160A were used for functional analyses. The expression levels of Mxi1 and S6K1 were determined by immunohistochemistry in lung cancer tissues and adjacent normal lung tissues.

Results: We found that Mxi1 is downregulated and correlated with poor prognosis in lung cancer. Using tandem affinity purification technology, we provided evidence that β-Trcp E3 ubiquitin ligase interacts with and promotes the ubiquitination and degradation of Mxi1. Furthermore, we demonstrated that Mxi1 is phosphorylated at S160 site by the protein kinase S6K1 and subsequently degraded via the ubiquitin ligase β-Trcp. Moreover, a phosphorylation mutant form of Mxi1 (Mxi1-S160A), which cannot be degraded by S6K1 and β-Trcp, is much more stable and efficient in suppressing the transcriptional activity of Myc and radioresistance in lung cancer cells. More importantly, a strong inverse correlation between S6K1 and Mxi1 expression was observed in human lung cancer tissues.

Conclusion: Our findings not only establish a crosstalk between the mTOR/S6K1 signaling pathway and Myc activation, but also suggest that targeting S6K1/Mxi1 pathway is a promising therapeutic strategy for the treatment of lung cancer.