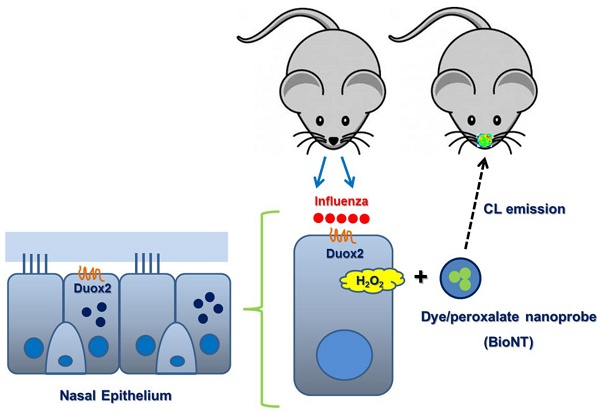 Rationale: Hydrogen peroxide (H2O2) provides an important mechanism for resisting infectious pathogens within the respiratory tract, and accordingly, the in situ analysis of H2O2 generation in real time provides a valuable tool for assessing immune response.

Methods: In this study, we applied a chemiluminescent nanoparticle-based real-time imaging approach to noninvasive evaluation of the Duox2-mediated H2O2 generation after viral infection, and assessed its usefulness for analytical purposes in mouse nasal mucosa. The chemiluminescent nanoprobe employed herein (BioNT) possesses appropriate physicochemical properties, such as high sensitivity and selectivity toward H2O2, no background noise, deliverability to the respiratory tract, and capability of multiple injections to a single animal subject for long-term repetitive imaging.

Results: The favorable characteristics of BioNT allowed for a longitudinal study with the same mice to noninvasively evaluate the long-term evolution of endogenous H2O2 in the nasal epithelium after infection with influenza A virus (WS/33/H1N1). We found that nasal epithelial cells by themselves respond to viral infection by generating H2O2, and that the in vivo cumulative H2O2 level in the nasal mucosa peaks at day 3 post-infection. Such in vitro and in vivo temporal behaviors of the endogenous H2O2 generation showed a good correlation with those of Duox2 expression after infection. This correlation could be further confirmed with Duox2-deficient subjects (Duox2-knockdown NHNE cells and Duox2-knockout mutant mice) where no H2O2-induced chemiluminescence was detectable even after viral infection. Importantly, upon knock-down of Duox2 expression, the condition of mice caused by viral infection in the upper airway was significantly aggravated, evidencing the involvement of Duox2 in the immune defense.

Conclusion: All these results reveal a critical role of Duox2 in the infection-induced H2O2 production and the H2O2-mediated immune response to infection in the respiratory tract, well elucidating the potential of BioNT as a noninvasive tool for fundamental in vivo studies of infectious diseases.