OVOL2 in metastasis prevention in NPC

Metastasis remains a critical - and largely elusive - target in the race to prevent cancer-related deaths. Such is true in nasopharyngeal carcinoma (NPC), where the presentation or development of metastatic disease is usually fatal. In this edition of Theranostics, Qi et al. demonstrate a critical role of the zinc-finger transcription factor, OVOL2, in suppressing metastasis and maintaining an epithelial phenotype. These data add to the depth of understanding of the metastatic program in NPC, and may eventually lead to a druggable target in late-stage NPC.

Nasopharyngeal carcinoma (NPC) is a common cancer diagnosis in Southern China, Southern Asia, and Northern Africa. NPC is strongly associated with Epstein Barr virus (EBV) infection. The main treatment for primary NPC patients is radiotherapy with or without chemotherapy, with locally advanced disease associated with a 50-70% five-year survival rate. Moreover, 10% of cases present with distant metastasis into other organs, such as bones, lungs, liver, and distant lymph nodes [1] and are associated with very poor outcomes [2, 3]. In metastatic disease, chemotherapy remains the mainstay of care, though resistance inevitably develops [3]. Relatively little is known about the important molecular changes that occur as NPC progresses. There is evidence that cell cycle regulators are misregulated [4].

In the context of carcinoma progression, epithelial to mesenchymal (EMT) transition is the process by which cancer cells expand beyond their primary location. This involves coordinated efforts to disperse of their cell-to-cell junctions and basal apical polarity, in order to escape and proceed to extravasation and colonization. This transition to a mesenchymal phenotype is mediated by several well-characterized EMT transcription factors (e.g. Snail, Twist, ZEB1/2 transcription factors), and many gene expression changes during early EMT that inhibit E-cadherin and upregulate a plethora of mesenchymal markers [5].

NPC patients, like those with many solid tumor cancers that present with, or advance to, distant metastasis, have limited treatment options. Importantly, there remains a gap of knowledge in the molecular mechanisms involved in the metastatic spread of NPC [6].

In this issue of Theranostics, Feng and colleagues describe the role of OVOL2, a member of the Ovo family of conserved zinc-finger transcription factors, in metastasis and the enrichment of stemness in NPC [7]. Although OVOL2 was cloned nearly 20 years ago [8], compared to other transcription factors involved in EMT, much less is known about OVOL2. Dai and colleagues [9] demonstrated a necessity for OVOL2 in neural crest tube development, and interestingly, found it necessary for mammary differentiation, with OVOL2 depletion leading to EMT [10]. Further evidencing a role of OVOL2 in maintaining an epithelial state in carcinoma, Guo and colleagues demonstrated the ability of OVOL2 to inhibit the EMT transcriptional repressor TWIST1 in lung cancers [11]. In addition, OVOL2 is downregulated in colorectal cancers, and its knockdown leads to EMT [12]. Providing even more evidence that OVOL2 is necessary to maintain an epithelial cell phenotype, a functional screen identified OVOL2 as a repressor of mesenchymal genes which was necessary to maintain corneal epithelium cells [13].

In this study, Feng and colleagues demonstrate OVOL2 is downregulated in NPC compared to healthy nasopharyngeal tissue, suggesting a role for OVOL2 in NPC progression. To firmly establish this, the authors utilized two distinct subclones from a single NPC parental cell line, CNE2, with the subclones possessing either a mesenchymal phenotype and a corresponding high metastatic ability (“S18”), or an epithelial phenotype and a corresponding low metastatic ability (“S26”).

This is clearly an important step to better understand the biology of advanced NPC. It presents with some obvious questions: Firstly, is loss of OVOL2 required for NPC EMT? Secondly, especially in light of the distinct epidemiology of OVOL2, are there genetic factors that predispose to NPC that are centered on OVOL2 (e.g. SNPs)? Thirdly, how can OVOL2 be pharmaceutically targeted? Given the difficulties of directly targeting transcription factors with drugs, a better understanding of how OVOL2 is regulated could lead to newer therapies. For instance, if a kinase stabilizes OVOL2, or if there are epigenetic changes that contribute to the loss of OVOL2, these could theoretically be targeted through available kinase inhibitors or available epigenetics targeted therapies.

Those questions notwithstanding, this present work offers some important insights into NPC tumorigenesis and metastatic spread. Moving forward, a greater understanding of the regulation of OVOL2 may provide future therapeutic strategies to combat advanced NPC.

Proposed model of the influence of OVOL2 on the EMT process in nasopharyngeal carcinoma (NPC). OVOL2 is a key transcription factor in epithelial-mesenchymal transition in NPC. Major EMT markers regulated by OVOL2 as demonstrated in epithelial (S26 and CNE2) and mesenchymal (OVOL2-knockout (KO) and S18) cells. OVOL2 negatively regulates stemness, and affects metastasis and drug resistance by inhibiting the EMT inducer, ZEB1. 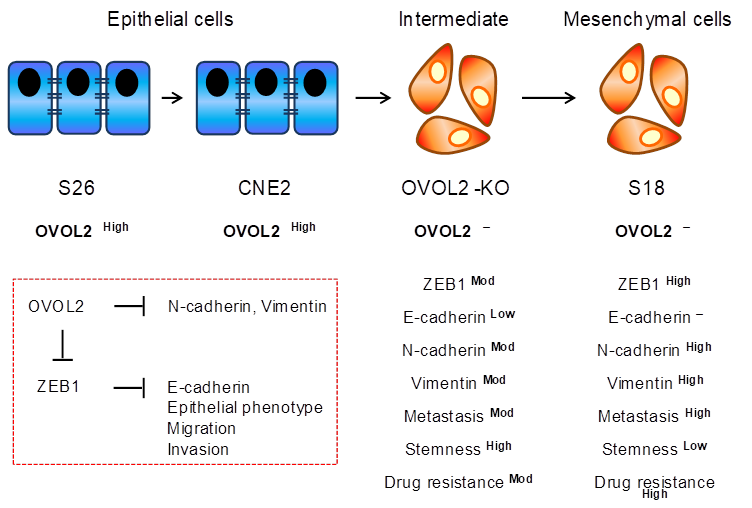