Methods: We analyzed the expression profile of long noncoding RNAs (lncRNAs) in BM-MSCs using microarray data. LncRNA TUG1 (Taurine Upregulated Gene 1) was selected and tested in radiated BM-MSCs and non-radiated BM-MSCs. Functional analyses (in vitro) were performed to confirm the role of TUG1 in the osteogenic inhibition induced by irradiation. A RIP (RNA immunoprecipitation) assay was performed to detect the interaction of TUG1 and Smad5. Smad5 and the phosphorylated Smad5 (p-Smad5) were tested by western blot. The nuclear translocation of p-Smad5 were tested by immunofluorescence analysis. Furthermore, a series of Smad5 deletions was constructed to identify the TUG1 binding site of Smad5.

Results: We found that numerous lncRNAs, including TUG1, exhibit significant expression differences after irradiation. After irradiation TUG1 was significantly increased in BM-MSCs and inhibited osteogenesis. Furthermore, TUG1 directly bound to Smad5, an osteogenic enhancer. Although the phosphorylation level of Smad5 was increased following irradiation, osteogenesis of BM-MSCs was decreased. Mechanistically, TUG1 interacting with the 50-90 aa region of Smad5 and blocks the nuclear translocation of p-Smad5, abolishing osteogenic signalling after irradiation.

Conclusion: These results indicate that TUG1 is a negative regulator of Smad5 signalling and suppresses osteogenesis of BM-MSCs after irradiation.

Long noncoding RNAs (lncRNAs) are defined as transcripts longer than 200 nucleotides and were originally regarded as transcriptional “noise” [11, 12]. In recent years, many studies have reported that lncRNAs are involved in cell osteogenic differentiation, such as lncRNA BORG [13], lncRNA ANCR [14], and lncRNA DANCR [15]. Our previous microarray data revealed that numerous lncRNAs exhibit significant expression differences after irradiation. Further analysis of the results of the lncRNA and co-expression networks revealed that the expression of lncRNA TUG1 (Taurine Upregulated Gene 1) (FC>2) was significantly increased after irradiation and may interact with Smad5, a key molecule in the osteogenic differentiation of BM-MSCs.

LncRNA TUG1 is a 7.1 kb lncRNA and was firstly identified in retinal cells. It can be upregulated by taurine, and it regulate photoreceptor differentiation [16]. It is involved in many diseases, including neurodegeneration and cancers. However, the role of TUG1 in the osteogenic differentiation of human BM-MSCs and its mechanism remains unclear.

Human BM-MSCs were obtained from ScienCell Research Laboratories (No. 7500, ScienCell) and were cultured in a complete medium (No. HUCMX-90011, Cyagen Biosciences, Inc.) at 37 °C and 5 % CO2. All media were changed every other day. The cells were passaged to a secondary culture when dense colonies of spindle-shaped cells covered approximately 80 %-90 % of the culture dish. BM-MSCs from passage 10 (P10) were used in this study. For the radiation treatment, when cultured cells reached 80 % confluence, they were irradiated with Co-60 for 13min at a rate of 0.69 Gy/min.

The flag-tagged Smad5 deletion constructs (WT, ∆25, ∆50, ∆90) were created using forward primers containing the BamH I site and a common reverse primer containing the SaL I site. Primer sequences are summarized in Table 1. The PCR products were sequentially digested with BamH I and SaL I and ligated into similarly digested pCMV-N-Flag-Smad5 vector. The in-frame ligation of all plasmids was confirmed by automated sequencing. Then, the vectors were transferred into BM-MSCs for protein expression by Lipofectamine® 3000(L3000015, Invitrogen).

The primers of Smad5 deletion constructs

Total RNA was extracted using the Trizol Reagent according to the manufacturer's protocol (No. 10296010, Invitrogen). Next, 1 µg of the extracted RNA was reverse-transcribed using PrimeScript RT reagent Kit with gDNA Eraser (No. RR047A, Takara). qRT-PCR was performed in triplicate in 20 µl reactions using SYBR® Premix Ex Taq™ II (Tli RNaseH Plus) (No. RR820A, Takara). The reaction protocol was as follows: heating for 10 min at 95 °C, followed by 40 cycles of amplification (15 s at 95 °C and 1 min at 60 °C). Data were analysed using the delta-delta Ct method. The primer sequences are summarized in Table 2.

Protein expression in the samples was analysed by western blotting. The total protein lysate was extracted with cell lysis buffer for western blotting and immunoprecipitation (No. P0013, Beyotime) and denatured by boiling. Protein samples were resolved on 12 % SDS-polyacrylamide gels and transferred to polyvinylidene fluoride membranes (PVDF Western Blotting Membranes, Roche). Membranes were blocked in PBS containing 5 % (w/v) non-fat dry milk and 0.1 % Tween-20 for 2 h, incubated with the appropriate antibodies overnight, washed with TBST buffer, and then incubated with secondary antibodies for 2 h. Blots were developed using a horseradish peroxidase-linked secondary antibody and developed with a chemiluminescent detection system (Phototope-HRP Western blot detection kit, New England Biolab).

Isolation of nuclear and cytoplasmic protein

The 48 fluorescently labeled oligonucleotides targeted to different regions of TUG1 (Table S2) were designed and hybridized to fixed BM-MSCs according to the protocol of the manufacturer (Biosearch Technologie). The BM-MSCs were rinsed briefly in PBS and then fixed in 3.7% formaldehyde in PBS (pH 7.4) for 10 min at room temperature and permeabilized in 70% ethyl alcohol at 4°C at least 1 h. Then Hybridization was carried out using probe sets and p-Smad5 antibody in a moist chamber at 37°C for 12-16 h according to the protocol (Biosearch Technologies).The image sections was acquired using a laser confocal microscopy (Leica SP5, Heidelberg, Germany).

The mRNA levels of TUG1, Runx2, OGN, OCN, Osterix in the tested samples are expressed as cycle threshold (CT) levels. Normalized copy numbers (relative quantification) were calculated using the ΔΔCT equation. Data were presented as the mean ± standard error of mean (SEM). Statistical analysis was performed using GraphPad Prism version 6.0. An independent t-test was used to compare data obtained from the experimental group with those obtained from the control group. The results are considered significant at *P< 0.05, **P < 0.01, and ***P < 0.001.

The expression level of TUG1 increases in BM-MSCs after irradiation 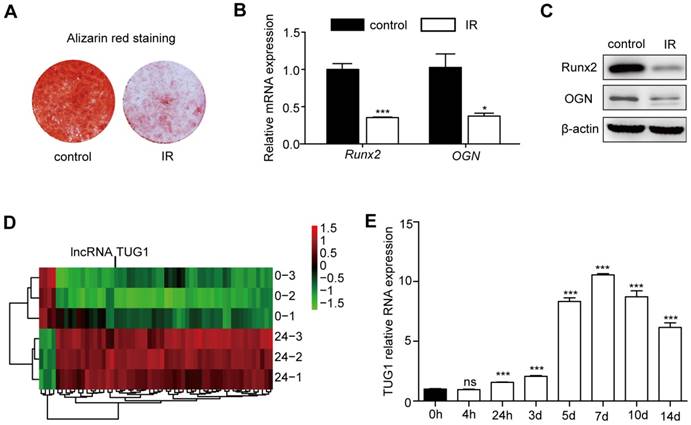 TUG1 suppresses the osteogenic differentiation of BM-MSCs after irradiation

To study the role of TUG1 in the osteogenic differentiation of BM-MSCs after irradiation, we knocked down the expression of TUG1 with siRNA vector (pGreen-Puro-TUG1) and overexpressed TUG1 by CRISPR/CAS9 (Figure 2A, 2B). 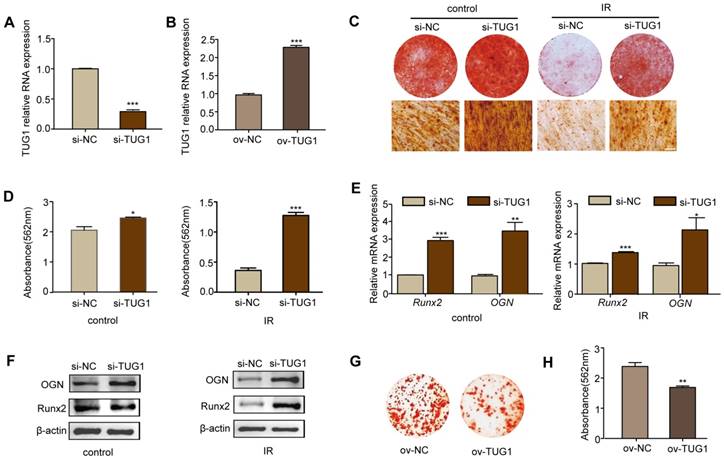 To clarify how TUG1 modulates the osteogenic differentiation of BM-MSCs after irradiation, we analysed the co-expression network maps of TUG1 with the microarray data. There are 46 mRNAs related to TUG1, including Smad5 (Figure 3A), which is an important positive transcription factor in the osteogenic differentiation of BM-MSCs. Smad5 consists of three regions: a conserved N-terminal domain (MH1 domain), a conserved C-terminal domain (MH2 domain) and a more divergent linker region [19]. Then, we used the online RNA-protein binding prediction site catRAPID to predict the interaction between TUG1 and Smad5. The result showed a high possibility that TUG1 binds to the MH1 domain of Smad5 (Figure 3B). To test whether TUG1 binds to Smad5, we performed a RIP assay and found that TUG1 RNA levels were detected in Smad5 immunoprecipitates relative to those of the control IgG immunoprecipitates (Figure 3C, 3D, Figure S1). These results support bioinformatics predictions indicating that TUG1 can directly bind to Smad5.

Moreover, RNA FISH assay of TUG1 combined with immunofluorescence detection of p-Smad5 in BM-MSCs showed that TUG1 was colocalized with p-Smad5 mainly in the cytoplasm of BM-MSCs (Figure 3E), indicating that TUG1 may regulate cytoplasmic p-Smad5 activity. 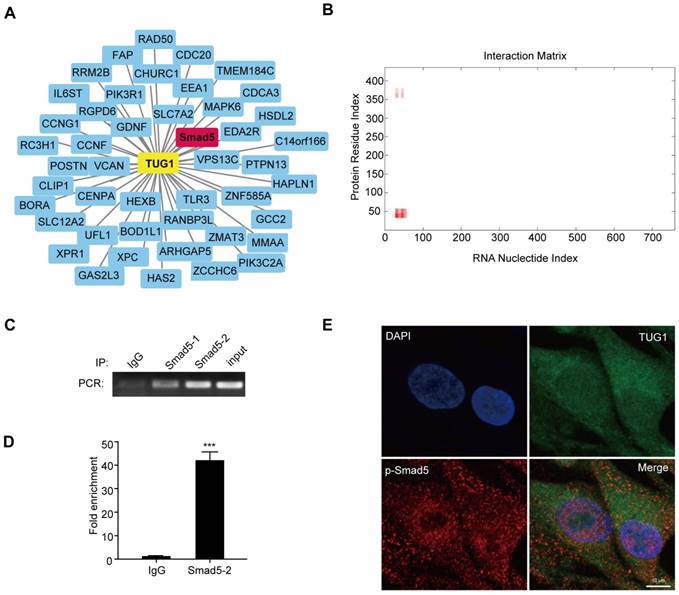 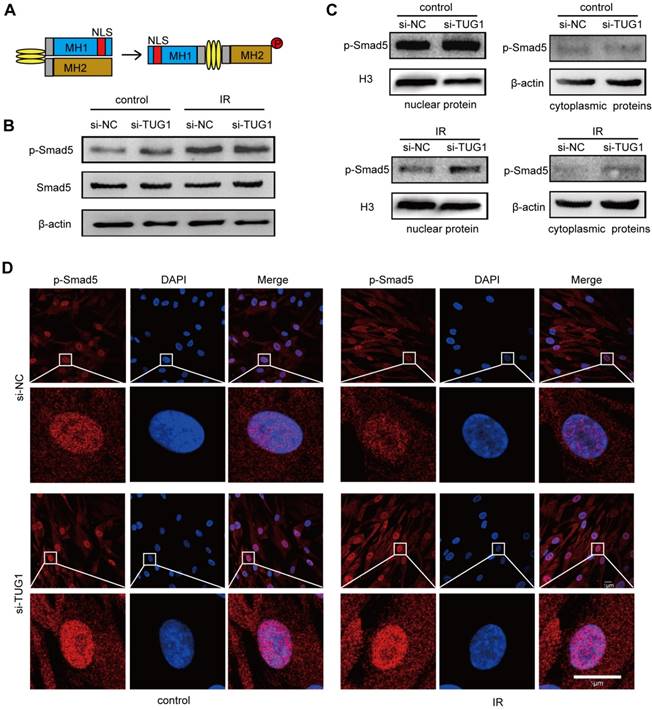 We found that the Smad5 WT, ∆25, ∆50 deletion constructs all physically interact with TUG1 (Figure 5B). However, the ∆90 deletion constructs failed to interact with TUG1, suggesting that the region between 50-90 of Smad5 is important for TUG1 binding (Figure 5B, Figure S2). The schematic of TUG1 bound to Smad5 is shown in Figure 5C. This result shown that the 50-90 aa region of Smad5 is required for its interaction with TUG1. 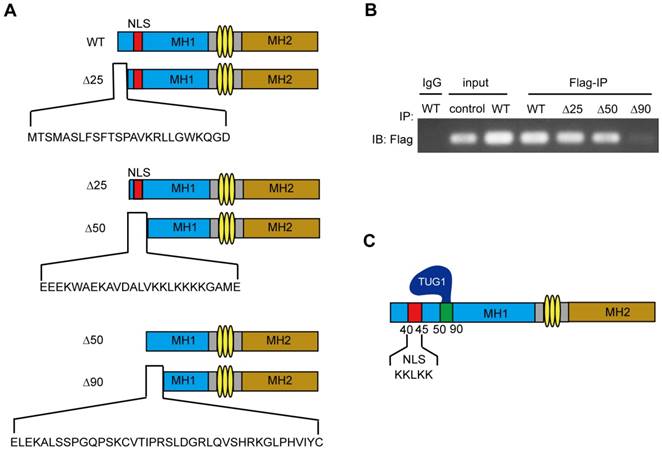 Irradiation can cause damage to the hematopoietic system. The major targets of irradiation in bone marrow include two types of stem cells: BM-MSCs and HSCs. After irradiation, numerous HSCs are apoptotic. Although BM-MSCs partially survive, their osteogenic differentiation function is significantly inhibited [17, 18, 28, 29].

Co-expression networks revealed that TUG1 may interact with Smad5 to regulate osteogenic differentiation of BM-MSCs (Figure 3A).

Smad5 is an important transcription factor in osteogenic differentiation and promotes the osteogenic differentiation of BM-MSCs [10]. As a receptor-regulated Smad (R-Smad) protein, Smad5 contains MH1 domain and MH2 domain. The MH1 domain of Smad5 contains a typical nuclear localization sequence "KKLKK" (NLS sequence), which is necessary for transport of Smad molecules from the cytoplasm to the nucleus [19]. The MH2 domain contains the receptor phosphorylation site SSXS and is a functional regulatory region of the Smad protein [36]. Under physiological conditions, Smad5 is mainly located in the cytoplasm, MH1 and MH2 bind to each other to inhibit activity. When the MH2 domain is phosphorylated, its conformation changes, and the NLS sequence in the MH1 domain is exposed, thereby directing the Smad5 protein into the nucleus [20], and then regulates the expression of target genes (Runx2, OGN) to induce osteogenic differentiation. In this process, the phosphorylation and the nuclear translocation of Smad5 is very important. Here, we found that irradiation significantly increased the phosphorylation level of Smad5. However, although irradiation treatment promoted the phosphorylation of Smad5, the nuclear translocation of p-Smad5 and osteogenesis in BM-MSCs was significantly inhibited, suggesting that unknown inhibitors induced by irradiation suppress nuclear translocation of p-Smad5.

Inhibitors of Smad5 include Smad6 [37], Smad7 [38], I-Smads (Inhibitory Smads), Smurf1 [39], SCP4/CTDSPL2 and PPM1A/PP2Ca [40], MicroRNA-222-3p [10], and so on. Smad6 and Smad7 were originally identified as inhibitory proteins for TGF-β family signalling [37] [38] and they stably bind to TGF-β type I receptors and inhibits phosphorylation of Smad5, resulting in inhibition of TGF-β signalling [41]. In the nucleus, I-Smads (Inhibitory Smads) can bind Smad5 complex to inhibit its transcription. Smurf1 can reduce the activity of Smad5, through I-Smads binding Smad5 by Smad5-mediated proteasome pathway [39]. The phosphatases, including SCP4/CTDSPL2 and PPM1A/PP2Ca, bind to p-Smad5 to mediate Smad5 dephosphorylation inactivation [40]. MicroRNA-222-3p can inhibit the expression of Smad5 then inhibit the osteogenic differentiation of BM-MSCs [10]. Dysregulation of regulatory molecules upstream of Smad5 can lead to the occurrence of multiple diseases [42].

RIP data showed that TUG1 can bind to Smad5 directly. On-line prediction demonstrated that TUG1 could bind to the N-terminal region including NLS sequence of Smad5, probably regulating the nuclear translocation of p-Smad5. Subsequently, a series of flag-tagged Smad5 deletions were constructed. We identified that the 50-90 aa of Smad5 is required for its interaction with TUG1. This region is right near the NLS (40-45 aa) of Smad5. These indicated that TUG1 may obscure the NLS of Smad5 to block the nuclear translocation of p-Smad5 and suppresses the osteogenic differentiation of BM-MSCs.

We propose that TUG1 act as a negative regulator of osteogenic differentiation by modulateing the nuclear translocation of p-Smad5 after irradiation. Our findings might provide a new target for controlling osteogenesis in BM-MSCs, which are crucial to the structure and function of the hematopoietic microenvironment after irradiation.