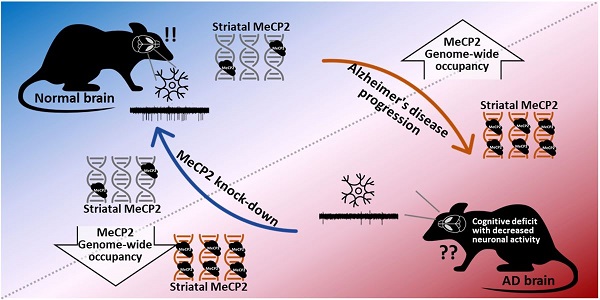 Rationale: Cerebral Methyl-CpG binding Protein 2 (MeCP2) is involved in several psychiatric disorders that are concomitant with cognitive dysfunction. However, the regulatory function of striatal MeCP2 and its association with Alzheimer's disease (AD) has been largely neglected due to the absence of amyloid plaque accumulation in the striatal region until the later stages of AD progression. Considerable evidence indicates that neuropsychiatric symptoms related to cognitive decline are involved with striatal dysfunction. To this respect, we investigated the epigenetic function of striatal MeCP2 paralleling the pathogenesis of AD.

Results: Striatal MeCP2 expression was increased in the younger (6 months) and older (10 months) ages of APP/PS1 mice, and the genome-wide occupancy of MeCP2 in the younger APP/PS1 showed dysregulated binding patterns in the striatum. Additionally, we confirmed that APP/PS1 mice showed behavioral deficits in multiple cognitive behaviors. Notably, defective cognitive phenotypes and abnormal neuronal activity in old APP/PS1 mice were rescued through the knock-down of striatal MeCP2.

Conclusion: We found that the MeCP2-mediated dysregulation of the epigenome in the striatum is linked to the defects in cognitive behavior and neuronal activity in the AD animal model, and that this alteration is initiated even in the very early stages of AD pathogenesis. Together, our data indicates that MeCP2 may be a potential target for the diagnosis and treatment of AD at asymptomatic and symptomatic stages.