The forkhead box class O (FoxO) family in mammals is comprised of the evolutionally highly conserved forkhead transcription factors, FoxO1, FoxO3a, FoxO4, and FoxO6 [15]. FoxO transcription factors play crucial roles in regulating immune-cell functions, including immune homeostasis and cellular differentiation [16]. FoxO1 is highly expressed in lymphoid cells, especially in T and B cells [17]; moreover, FoxO3a is widely expressed in multiple tissues including lymphoid and myeloid lineage cells [18, 19]. In vitro differentiated-iTreg cells show markedly reduction of Foxp3 protein levels in FoxO1 knockout or FoxO1/FoxO3a double conditional knockout T cells [20, 21]. The transcription factors FoxO1 and FoxO3a bind directly to the Foxp3 promoter and up-regulate Foxp3 expression [20, 21]. The subcellular localization and transcriptional activity of FoxO1 and FoxO3a are regulated by phosphorylation [22, 23]. For example, IKKβ induces the FoxO3a Ser644 phosphorylation in cancer cells, leading to the nuclear export of FoxO3a [24, 25]. Moreover, Thr24 phosphorylation of FoxO1 is decreased in Treg cells upon TCR stimulation compared to that of conventional T cells, resulting in the nuclear retention of FoxO1 [26]. However, it is unclear whether GLK signaling induces FoxO1/FoxO3a phosphorylation, leading to dysfunction of Treg cells. 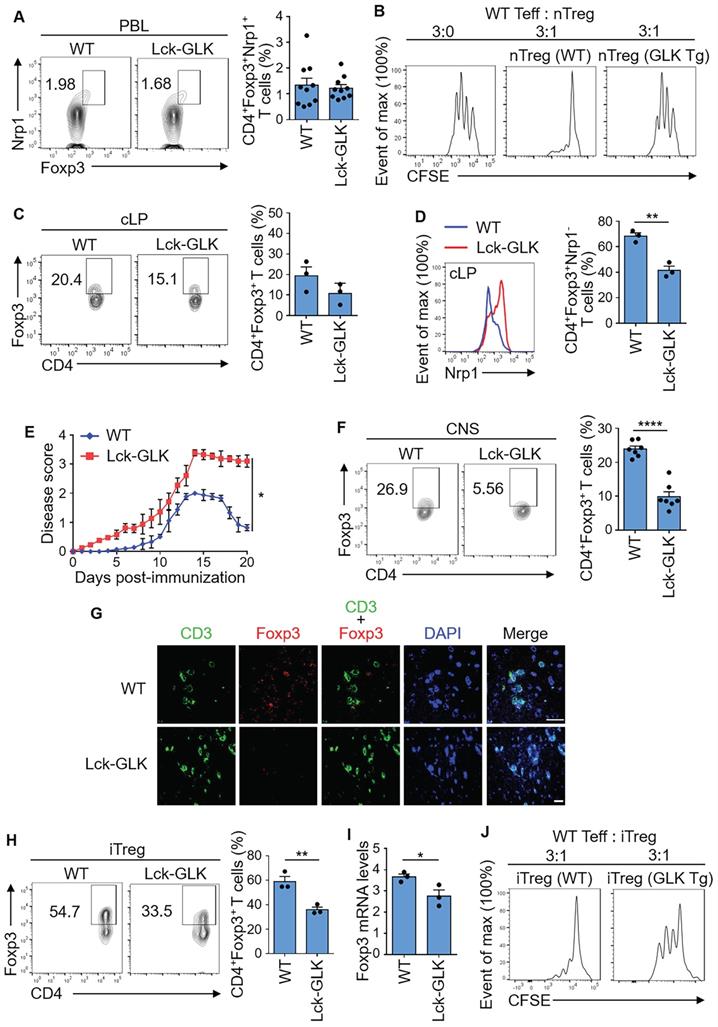 We next investigated whether IKKβ interacts with FoxO1. Co-immunoprecipitation (co-IP) assays showed an interaction between IKKβ and FoxO1 (Figure 3A). ALPHA technology/protein-protein interaction assays with specific donor/acceptor beads also confirmed the interaction between FoxO1 and IKKβ, but not between FoxO1 and GLK (Figure 3B). Purified IKKβ and FoxO1 proteins were subjected to in vitro binding assays; the data showed a direct interaction between these two proteins in vitro (Figure 3C). Furthermore, the direct interaction between IKKβ and FoxO1 in cells was demonstrated by fluorescence resonance energy transfer (FRET) analysis (Figure 3D). To examine the subcellular localization and the protein interaction, GLK transgenic iTreg were subjected to immunofluorescence microscopy and in situ proximity ligation assay (PLA), respectively. Immunofluorescence imaging results showed that IKKβ and FoxO1 were co-localized in the cytoplasm of GLK transgenic iTreg cells, whereas these two proteins were co-localized in the nucleus of wild-type iTreg cells (Figure 3E). The PLA signals of IKKβ-FoxO1 interaction complexes were detected in the nucleus of wild-type T cells (Figure 3F). In contrast, GLK transgene induced the nuclear export of the IKKβ-FoxO1 protein complex in iTregs (Figure 3F). These results suggest that IKKβ directly interacts with FoxO1, resulting in FoxO1 nuclear export upon GLK signaling. 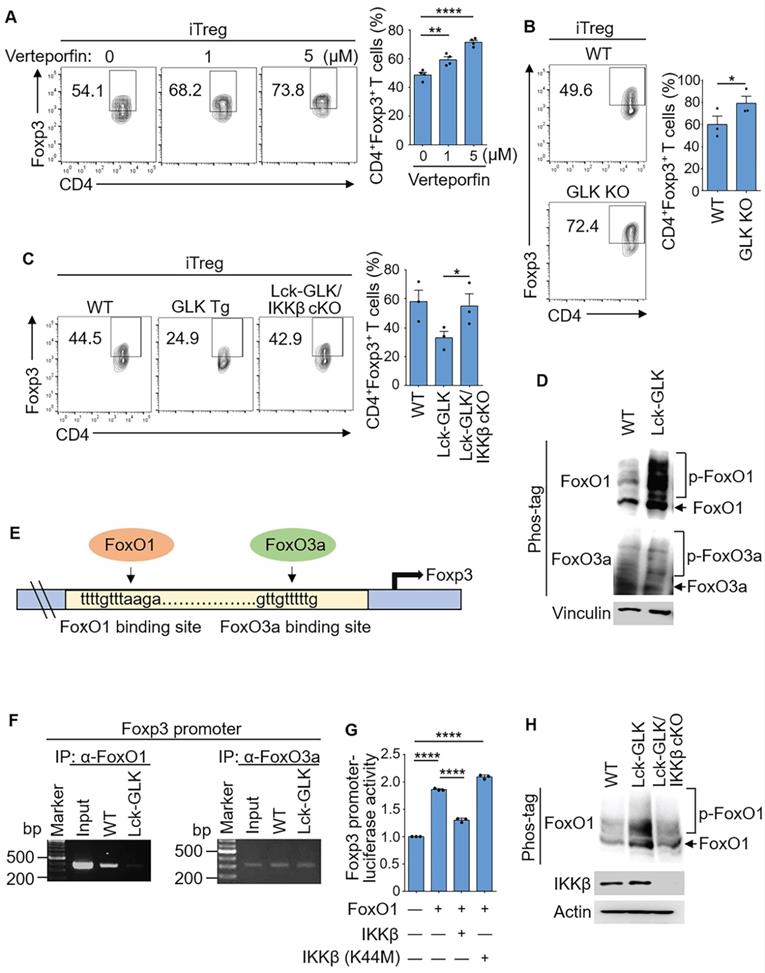 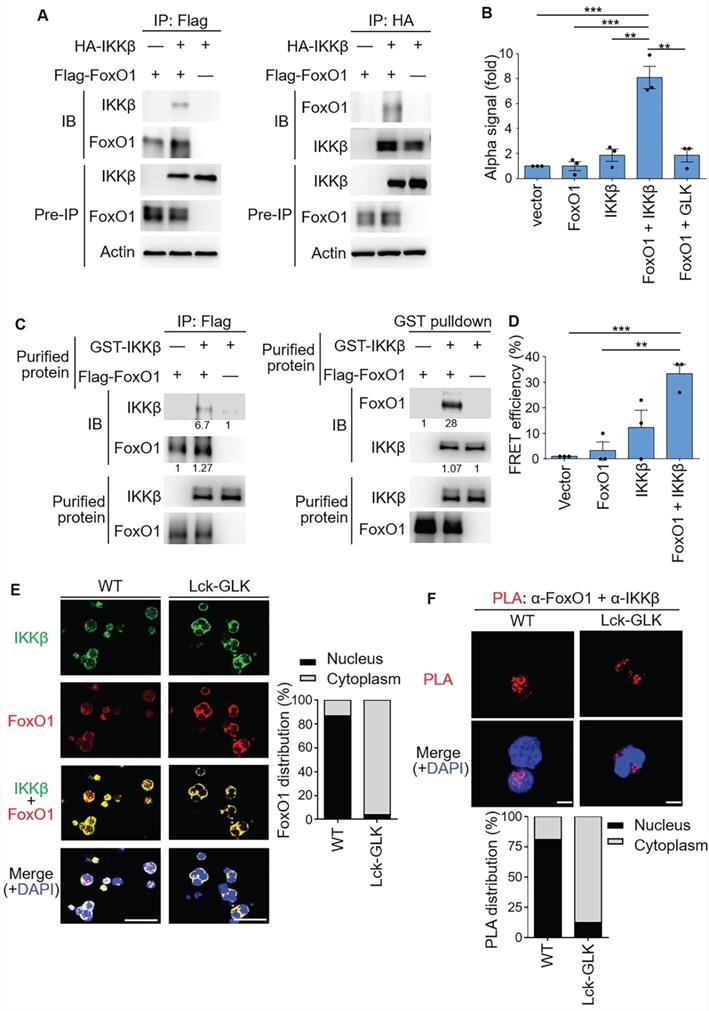 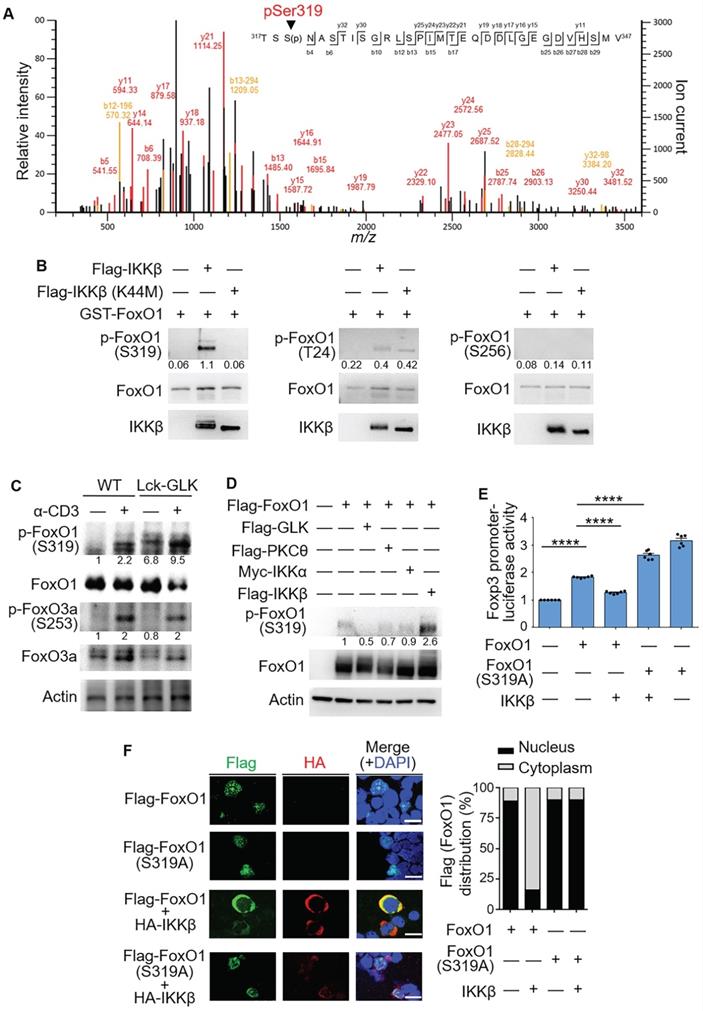 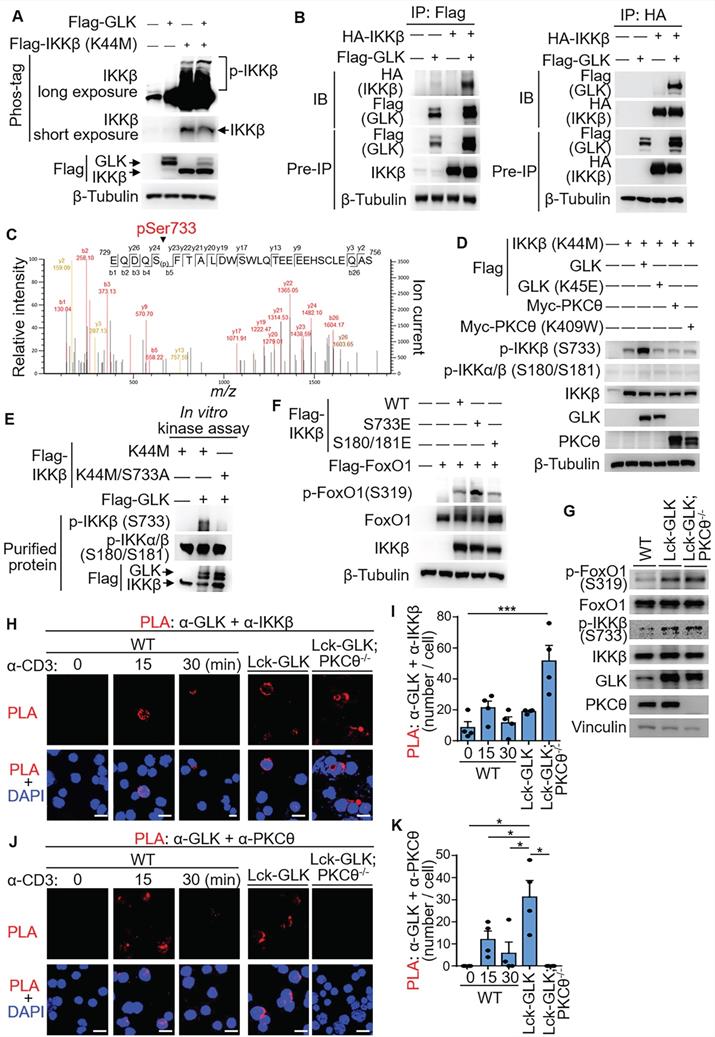 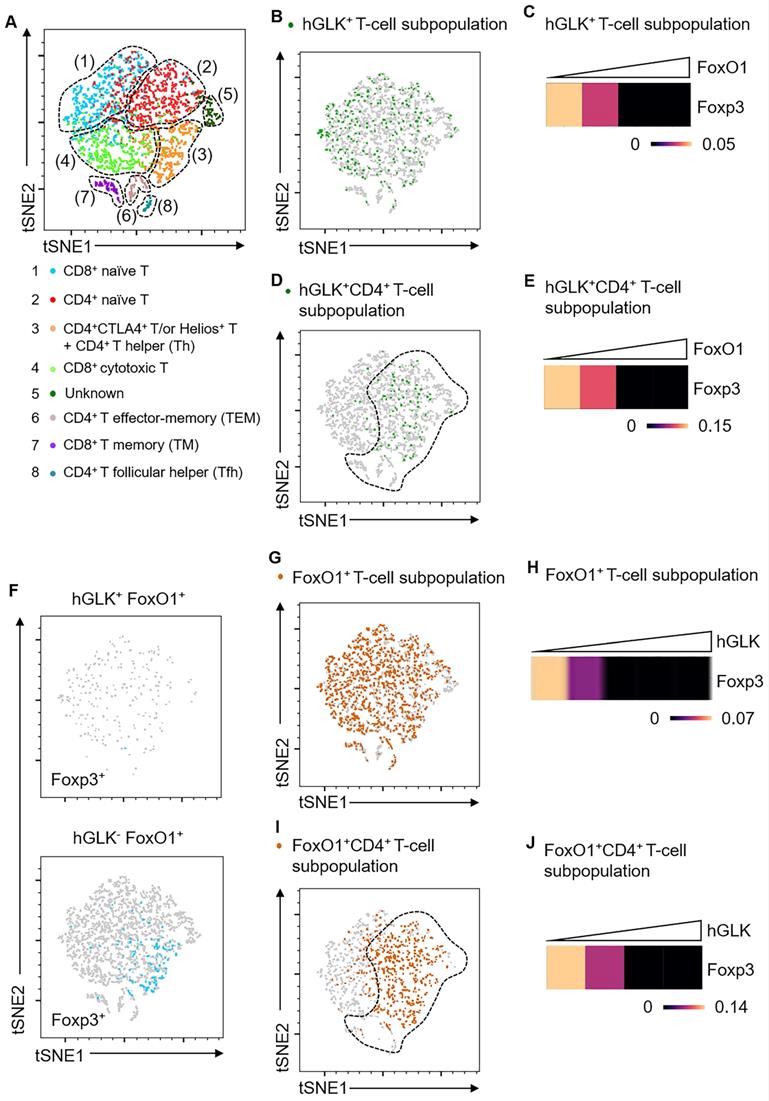 Another key finding in this report is that GLK directly interacted with and phosphorylated IKKβ at Ser733 in a PKCθ-independent manner, resulting in selective phosphorylation of FoxO1 but bot FoxO3a. Subsequently, Ser733-phosphorylated IKKβ inhibited the FoxO1 transcriptional activity on the Foxp3 promoter by inducing FoxO1 phosphorylation and nuclear export. Upon TNF-α stimulation, phosphorylation of 10 serine residues (including Ser733) at the C-terminal region of IKKβ, mimicked by a mutant with 10 serine-to-glutamic acid residues, results in the inhibition of IKKβ kinase activity in vitro [30]. It is likely that phosphorylation of one or more of the other 9 serine residues, but not Ser733, on IKKβ is responsible for IKKβ inactivation. In addition, IKKβ Ser181 is phosphorylated in response to proinflammatory cytokines, including TNF-α and IL-1β [30]. In GLK-overexpressing T cells, IKKβ stimulates IL-17A transcription by phosphorylating RORγt [13]. These findings suggest that the phosphorylation of different IKKβ residues controls different functions of IKKβ by regulating its kinase activity [31] and/or interaction with its targets. Thus, GLK overexpression in T cells induces IKKβ activation, leading to both induction of IL-17A production and inhibition of Foxp3 transcription.

Taken together, our study reveals a critical mechanism of GLK-IKKβ signaling-inhibited Foxp3 transcription in T cells (Figure 7). GLK overexpression-induced IKKβ Ser733 phosphorylation and subsequent IKKβ-mediated FoxO1 Ser319 phosphorylation, resulting in FoxO1 nuclear export and Foxp3 downregulation. Thus, GLK is a promising therapeutic target by both blocking IL-17A-mediated autoimmune diseases [10] and enhancing Treg-mediated immune suppression. It would be valuable to evaluate the clinical application of the GLK inhibitor in the GLK-associated autoimmune diseases, such as SLE and RA [9-11, 14, 35].

All mice were bred under specific pathogen-free facility at National Health Research Institutes (NHRI) and maintained according to institutional guidelines of the Institutional Animal Care and Use Committee of NHRI. All mouse lines were purchased and backcrossed as described previously [13]. All animal experiments were performed under the animal protocol approved by Institutional Animal Care and Use Committee of NHRI. Sex matched, 8- to 15-week-old mice were used in this study. Floxed IKKβ mice (EMMA 001921) were purchased from the Jackson Laboratory (JAX). The data presented in this study were performed on sex-matched, 8- to 15-week-old littermates. All mice used in this study were maintained in temperature-controlled and pathogen-free cages. Lck-GLK Tg mice in C57BL/6 background were generated as described previously [13]. In Lck-GLK Tg mice, a full-length human GLK coding sequence was placed downstream of the proximal Lck promoter [36]. 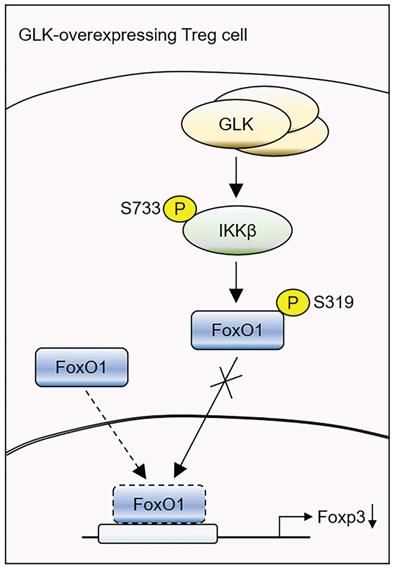 Isolation of lamina propria lymphocytes from the colon

These experiments were performed as described preciously [9].

Isolation of lymphocytes from brain and spinal cord

YFP-FoxO1 and CFP-IKKβ plasmids were co-transfected into HEK293T cells. When the pairs of YFP-fused FoxO1 and CFP-fused IKKβ proteins are within 8 nm, YFP signals will be stimulated by CFP signals. These fluorescence signals were detected by an EnVision 2104 Multilabel Plate Reader (PerkinElmer Life Sciences). The FRET efficiency [39] was calculated as described previously [13].

Murine T Cells were fixed in cold methanol for 1 min. After permeabilization with fixation/permeabilization buffer (BD Bioscience) for 1 h, the cells were blocked with 5% bovine serum albumin for 1 h. The cells were incubated with rabbit anti-FoxO1 and mouse anti-IKKβ primary antibodies (1:200 dilution) for 16 h and then incubated with anti-rabbit IgG-CF488 and anti-mouse IgG-CF594 secondary antibodies (1:500 dilution), respectively, for 1 h. The secondary antibodies were purchased from Biotium. The fluorescence signals were analyzed using Leica TCS SP5II confocal microscope [13, 28].

This study was supported in part by grants from NHRI (IM-105-PP-01 and IM-105-SP-01, to T.-H.T.) and the Ministry of Science and Technology, Taiwan (MOST-106-2321-B-400-013 and MOST-110-2320-B-400-018 to T.-H.T. and MOST-109-2326-B-400-005 to H.-C.C.). T.-H.T. is a recipient of the Endowed Chair in Biotechnology from Taiwan Bio-Development Foundation (TBF). We thank the Laboratory Animal Center (Association for Assessment and Accreditation of Laboratory Animal Care International accredited) of the National Health Research Institutes for mouse breeding and maintenance. We thank the Institute of Biological Chemistry of Academia Sinica for the support of mass spectrometry-based proteomic and data collection.