Breast cancer is the most common malignancy in women worldwide. Recent developments in minimally invasive interventional radiology techniques have significantly improved breast cancer treatment. This study aimed to develop a novel technique for the local management of breast cancers using radiofrequency heat (RFH). We performed both in vitro experiments using human breast cancer cells and in vivo validation in xenograft animal models with magnetic resonance imaging (MRI) and pathological correlation to investigate the feasibility of our approach. Four treatment groups, including (1) no treatment (control), (2) RFH-only, (3) chemo (doxorubicin)-only, and (4) combination therapy with both doxorubicin and RFH, were conducted in each experiment. In vitro combination therapy significantly decreased breast cancer cell proliferation while increased their apoptosis index compared to the other three groups. MRI demonstrated a significant tumor size reduction in animals treated with combination therapy compared to those receiving other treatments in vivo. Such result was further confirmed by pathological examination. In conclusion, our findings suggests that RFH can enhance the therapeutic efficiency of doxorubicin on breast cancers, thus establishing the basis for future development of interventional molecular image-guided local chemotherapy for breast malignancies.

Breast cancer is the most common malignancy in women with a steadily increasing incidence worldwide. It is estimated that 235,030 patients will be diagnosed with invasive breast cancer and 40,430 will die of the disease in the United States in 2014 [1]. Although systemic chemotherapy is one of the main therapeutic strategies for breast cancer, there is no guarantee that sufficient concentration of chemotherapeutic agents would be delivered to the target tumor without causing toxicities to other vital organs [2]. In addition, previous studies have suggested that inefficient drug deposit at the target tumors via systemic administration significantly contribute to chemoresistance in cancer [3].

Recent studies have reported that hyperthermia at approximately 41 ℃ to 45 ℃ can enhance the efficiency of chemotherapy in a variety of malignancies [4-7]. However, certain limitations, such as inadequate devices for local heat delivery to the targets and lack of appropriate temperature monitoring at the targets, limit the application of hyperthermia-enhanced therapy for cancer in clinical practice [8, 9].

These breast cancer cells were seeded in each chamber of a Lab-Tek® 4-chamber cell culture slide (Nalge Nunc International, Rochester, NY, USA) at 4 × 104 cells/chamber. The slice was placed in a 37 °C water bath. A 0.032-inch magnetic resonance imaging-heating-guidewire (MRIHG) was attached under the bottom of chamber 4 of the 4-chamber cell culture slide, and then connected to a 2450-MHz radiofrequency (RF) generator (GMP150, OPTHOS, Rockville, MD, USA) (Figure 1). When the RF generator was operated at 2-3 Watts through the MRIHG, the temperature in chamber 4 increased to approximately 42 °C from 37 °C, which created a heat gradient along the 4 chambers. The temperature of each chamber was recorded by a thermometer (Photon Control, Burnaby, Canada).

(A) In vitro experimental set-up for radiofrequency heat (RFH) of human breast cancer cells. Cells are seeded in a 4-chamber cell culture slide, which is placed in 37°C water bath. A 0.032-inch magnetic resonance imaging-heating-guidewire (arrow) is positioned under the bottom of chamber 4. (B) When the temperature reaching 42 °C in chamber 4, a stable heat gradient is observed along the four chambers. (C) The proliferation of cells treated with RFH at 42 °C is significantly decreased compared to those treated at 37 °C and 39 °C (*, p < 0.05; **, p < 0.01). 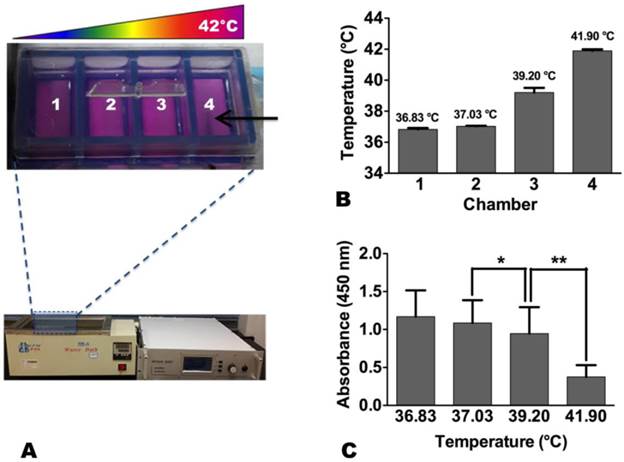 (A) In vivo experimental set-up for radiofrequency heat (RFH) of a xenograft tumor (circle) implanted in a nude mouse. Trans-tumor insertion of a 0.032-inch magnetic resonance imaging-heating-guidewire (MRIHG) is performed (open arrow). The radiofrequency-heated tumor is maintained at 42 °C by instantly measuring the temperature with a micro-figure thermometry wire (solid arrow), which is placed parallel to the MRIHG within the tumor. (B) Pathological study with hematoxylin and eosin staining confirms the successful generation of a breast xenograft tumor (400 × magnification).

For comparison of therapeutic effects among different RFH temperatures, the same amount of doxorubicin (0.25 µM) was dripped into each of the four chambers while the bottom of chamber 4 was heated to 42°C for 20 minutes and that of chamber 1 remained at 37 °C (Figure 1). For comparison of therapeutic effects among different treatments, breast cancer cells were divided into groups: no treatment (control), RFH-only (42 °C for 20 minutes), chemo-only (0.25 µM doxorubicin), and combination therapy (chemo plus RFH). The concentration of doxorubicin at 0.25 µM was selected based on previous studies by other groups[11-13]. Cells were then cultured for 72 hours before different laboratory examinations, including cell proliferation assay and apoptosis assay, were conducted to examine and compare the effects of various treatments on breast cancer cells.

The animal protocol was approved by our Institutional Animal Care and Use Committee. Female nu/nu mice at 4-6 weeks of age were used to generate the tumor model. A suspension of 1 × 107 Bcap-37 cells in 100 μL of phosphate-buffered saline (PBS) was injected subcutaneously into the unilateral back of each mouse to initiate a breast cancer mass (Figure 2). Within two weeks, the tumor masses grew to approximately 5 mm in diameter. A 0.032-inch MRIHG was inserted through the center of each tumor for local heating, while a 2.7-mm micro-thermometry fiber was placed parallel to the MRIHG for instant measurement of the MRIHG-mediated RF heating at the target tumor (Figure 2).

The harvested tumor tissues were then fixed in 4% paraformaldehyde, embedded in paraffin, and sectioned at 5-mm slices. After de-waxing and hydration with a gradient ethanol series (100%, 95%, 90%, 80%, and 70%), tissue slices were stained with the in situ Cell Death Detection Kit Fluorescein (Roche, Basel, Switzerland) and then exposed to freshly-prepared proteinase K working solution for 15-30 minutes at 37 ℃ (10-20 μg/mL in 10 mM Tris/HCl, pH 7.4-8). After washing with PBS, slices were incubated in 50 mL of TUNEL (terminal deoxynucleotidyl transferase-mediated nick end-labeling) reaction mixture for 60 minutes in dark and humidified environment. They were again washed with PBS and sealed with Prolong Gold Antifade Reagent after staining with 4', 6-diamidino-2-phenylindole dihydrochloride (DAPI; Invitrogen, Carlsbad, USA) overnight. All slides were examined with a fluorescent microscope (Leica, Solms, Germany). The number of apoptotic cells was counted by Image-Pro Plus 6 software (Media Cybernetics, Rockville, MD, USA). 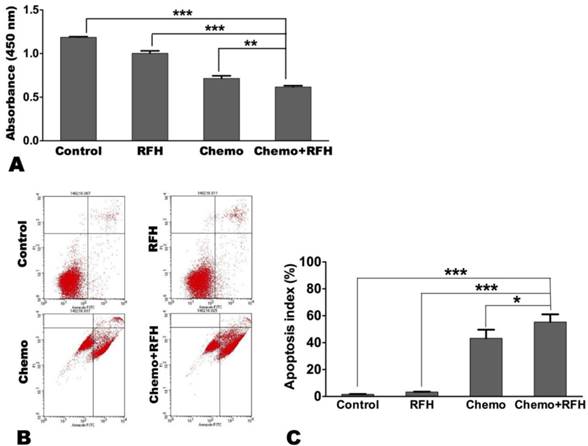 T1-weighted images (T1WI) of mice bearing breast cancer xenografts in all four treatment groups, demonstrating homogeneous hypointense tumor masses (arrows) on the animals' unilateral back. The tumor masses become hyperintense after intravenous administration of gadolinium (enhanced T1WI). The follow-up imaging of tumor growth at different time points shows that tumor size in the chemo plus radiofrequency heat (RFH) group (s-x) clearly decreases at week 2 after treatment (arrow on x), in comparison to those in the control (a-f), RFH-only (g-l), and chemo-only (m-r) groups. 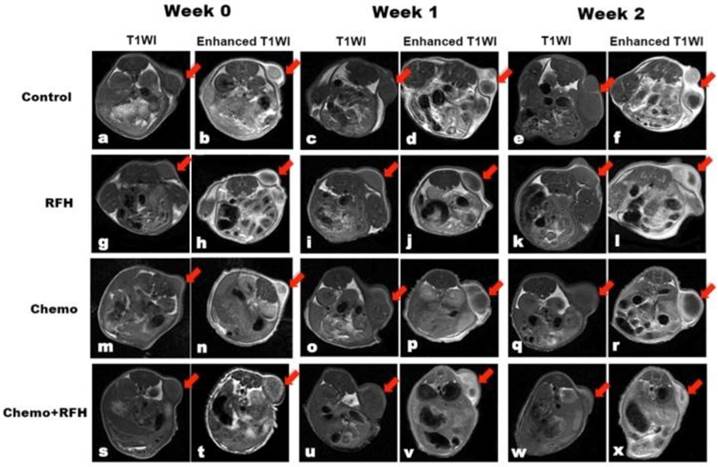 (A) Representative pathology of the tumor masses harvested from the four study groups further confirm the size reduction of tumor masses in mice receiving combination therapy with chemo plus radiofrequency heat (RFH). (B) Comparison of the relative tumor volume among the four treatment shows that RFH-enhanced chemotherapy significantly inhibits tumor growth at week 2 post-treatment. 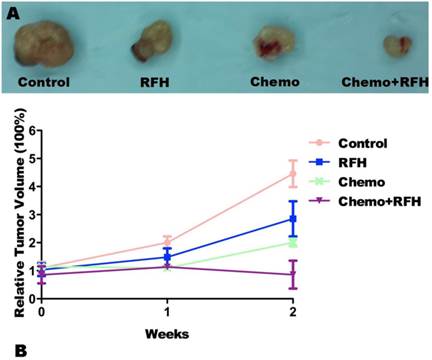 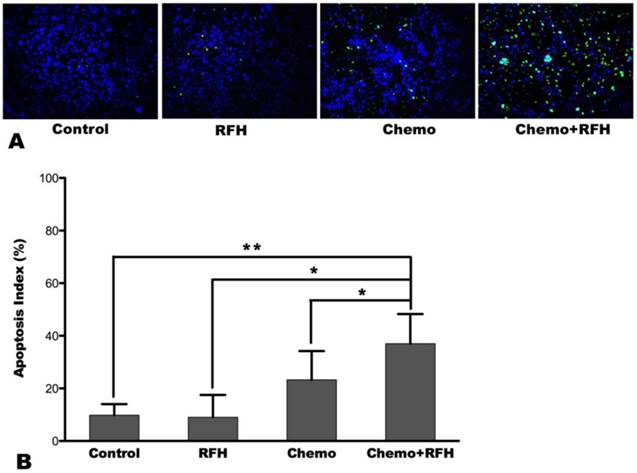 Breast cancer is the most common malignancy in women worldwide. Although chemotherapy and hormone treatments have improved patient survival, ineffective chemotherapy remains a clinical problem owing to the disease's significant heterogeneity with different histologic components, gene-expression profiles, and mutational patterns [15]. Systemic administration of chemotherapy is conventional, but current technology does not guarantee sufficient accumulation of chemotherapeutic agents at the target tumors, whereas toxicities to other vital organs remain with systemic delivery [2, 16].

Recent developments of minimally-invasive interventional radiology technologies have significantly improved cancer management, including that of breast cancer [17, 18]. Under the guidance of imaging, one can precisely place the interventional devices to the target tumors, thereby delivering highly concentrated therapeutics to the targets. Such local approaches can avoid the systemic administration of chemotherapeutic agents and thus minimize toxicity to other organs [19, 20].

In the present study, we attempted to overcome the disadvantages of systemic chemotherapy for breast cancer by developing a novel interventional therapeutic approach that combined the benefits of multiple modalities including RF technology, interventional oncology, and chemotherapy. Our in vitro and in vivo results demonstrated that RFH could significantly improve the efficacy of chemotherapeutic agent (doxorubicin) in human breast cancer cells and that intratumorally delivered RFH could significantly enhance local chemotherapy for breast cancer. The mechanisms underlying RFH-enhanced chemotherapy might include heating to fracture tissue, increasing permeability of the cytoplasmic membrane, increasing cellular metabolism, and increasing the activity of heat shock proteins [21]. In addition, RFH itself may also impair the drug efflux ability of cancer cells. All these mechanisms facilitate the entrance of therapeutics into targeted tumor cells for effective destruction of tumor tissues, and thereby improve therapeutic outcome.

In addition, our novel technique potentially allows simultaneous intratumoral delivery of both chemotherapeutic agents and RFH, which might benefit conventional radiofrequency ablation (RFA) of tumors. RFA has become an important therapeutic tool for the treatment of unresectable tumors [22]. However, its application is limited in tumor masses that are in close proximity to normal structures prone to thermal injury, such as the vasculatures [23]. Furthermore, incomplete ablation often occurs at the tumor margins due to either decreased RFA heat by neighboring blood flows or irregularly shaped tumor masses being too large to be completely covered by the RFA electrode field [24]. Ultimately, such drawbacks of incomplete ablation often result in recurrences of RFA-treated tumors. A combination of RFH-enhanced local chemotherapy and intratumoral RFA may provide the opportunity of using RFA-associated peritumor hyperthermia to specifically enhance chemo-destruction of the tumor margins while avoiding RFA-related thermal injuries to the normal structures adjacent to the RFA-treated tumor masses [25, 26].

Further efforts are required to determine whether this novel combination therapy approach can increase endpoint survival and to validate this new technique in different tumor models with optimization of administered regimens. Bcap-37 cells were relatively fast growing breast cancer cells, and thus we had to limit our follow-up time up to two weeks after the treatments. This was because longer follow-up period would result in the xenograft tumor masses, especially in the control animal group, becoming more than ten percent of the body weight, which was not approved by our Institutional Animal Care and Use Committee. Thus, as a limitation, this study did not allow us to evaluate the long-term therapeutic effects with follow-up MRI.

Xiaoming Yang, MD, PhD, is professor and director of Image-Guided Bio-Molecular Intervention Research at University of Washington School of Medicine, Seattle, WA, USA. He is also a professor at the Department of Radiology, Sir Run Run Shaw Hospital, Zhejiang University School of Medicine, China. He has coauthored more than 90 publications in many leading journals in the field of medical imaging, such as Radiology, Circulation, Nature Reviews Cardiology, Magnetic Resonance in Medicine, and Journal of Vascular and Interventional Radiology. The current research interests of Dr. Yang's laboratory include interventional radiology and molecular imaging.

Yurong Zhou, MD, obtained her MD from Tongji Medical College of Huazhong University of Science and Technology in 2004. She is currently a Ph.D. candidate at Zhejiang University School of Medicine under the supervision of Dr. Xiaoming Yang. Her research focuses on medical imaging.