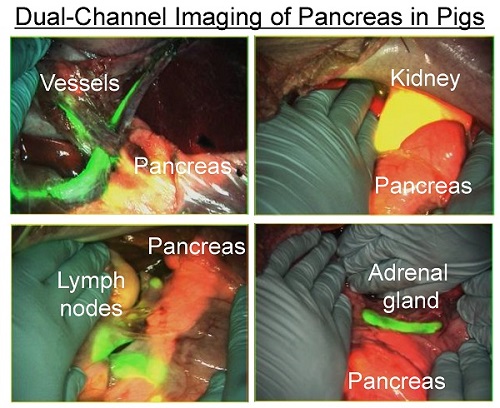 Objective: Pancreas-related complications are some of the most serious ones in abdominal surgery. The goal of this study was to develop and validate novel near-infrared (NIR) fluorophores that would enable real-time pancreas imaging to avoid the intraoperative pancreatic injury.

Design: After initial screening of a large NIR fluorophore library, the performance of 3 selected pancreas-targeted 700 nm NIR fluorophores, T700-H, T700-F, and MB, were quantified in mice, rats, and pigs. Dose ranging using 25 and 100 nmol, and 2.5 µmol of T700-F, and its imaging kinetics over a 4 h period were tested in each species. Three different 800 nm NIR fluorophores were employed for dual-channel FLARE™ imaging in pigs: 2 μmol of ZW800-1 for vessels and kidney, 1 μmol of ZW800-3C for lymph nodes, and 2 μmol of ESNF31 for adrenal glands.

Results: T700-F demonstrated the highest signal to background ratio (SBR), with peak SBR at 4 h postinjection in mice. In pigs, T700-F produced an SBR ≥ 2 against muscle, spleen, and lymph nodes for up to 8 h after a single intravenous injection. The combination of T700-F with each 800 nm NIR fluorophore provided simultaneous dual-channel intraoperative imaging of pancreas with surrounding organs in real time.

Recently, we developed a library of NIR fluorophores targeted to various tissues and organs including thyroid and parathyroid [12], lymph nodes [13], nerves [14], adrenal glands [15], and bone [16] with high signal in the target and relatively low background after a single intravenous injection. Furthermore, screening the in vivo performance of our over 300 novel compounds, we found T700-F and T700-H could target the pancreas specifically. Combined with our FLARE intraoperative imaging system, which provides simultaneous dual-channel NIR fluorescence imaging along with color video, various surgeries can now be performed under real-time image guidance [17]. In this study, we hypothesized that the same approach could be used for pancreas imaging, and focused our experiments on novel agents that could outperform MB.

NIR Fluorescent Contrast Agents: Methylene blue (MB; USP 1%, 10 mg/mL) was purchased from Taylor Pharmaceuticals (Decatur, IL). T700-H and T700-F were synthesized as described in our previous reports [12,18-20], and served as pancreas targeting 700 nm emitting NIR fluorophores. Three different 800 nm NIR fluorophores including ZW800-1, ZW800-3C, and ESNF31, were also used for the dual channel imaging of surrounding tissue: ZW800-1 for NIR angiography and kidney imaging [21]; ZW800-3C for PLN imaging [13], and ESNF31 for adrenal glands [15]. MB was used as purchased without further treatment (31.3 mM), and all other NIR fluorophores were dissolved in dimethyl sulfoxide (DMSO) as a 10 mM stock solution.

NIR Fluorescence Imaging System: The dual-NIR channel FLARE imaging system has been described in detail previously [17,24]. In this study, 670 nm excitation and 760 nm excitation fluence rates used were 4.0 and 11.0 mW/cm2, respectively, with white light (400 to 650 nm) at 40,000 lx. Color image and 2 independent channels (700 nm and 800 nm) of NIR fluorescence images were acquired simultaneously with custom software at rates up to 15 Hz over a 15-cm diameter field of view (FOV). In the color-NIR merged images, 700 nm NIR fluorescence and 800 nm fluorescence were pseudo-colored red and lime green, respectively. The imaging system was positioned at a distance of 18 inches from the surgical field. Camera exposure time and normalization were held constant for each experiment.

For large animal swine studies, 164 µmol (1.5 mg/kg) of MB and 2.5 µmol of T700-F were injected intravenously. We observed the fluorescent signals of viscera for 1 h post-injection, calculated a signal-to-background ratio (SBR) at 6 different time points (0, 3, 5, 15, 30, and 60 min), and compared the performance (n = 3 per each fluorophore). Next, we performed kinetics study using 2.5 µmol of T700F, and images were recorded at 11 different time points (0, 15, 30, 60, 90, 120, 180, 240, 300, 360, and 480) (n = 3). Finally, we tested dual-channel imaging of pancreas with surrounding vital tissues and organs including arteries, kidneys, pan lymph nodes (PLNs), and adrenal glands: 2 µmol of ZW800-1 for NIR arteriography and kidney imaging, 1 µmol of ZW800-3C for PLN imaging, and 2 µmol of ESNF31 for adrenal gland imaging (n = 1 for each study). The NIR angiography was recorded immediately after a single intravenous injection of ZW800-1 and kidneys were imaged 2 h post-injection. The PLN imaging was performed 4 h post-injection, while adrenal glands were imaged at 30 min post-injection. These imaging times were chosen based on prior optimization [13,15,25]. Each NIR agent was diluted into 10 mL of D5W prior to injection. 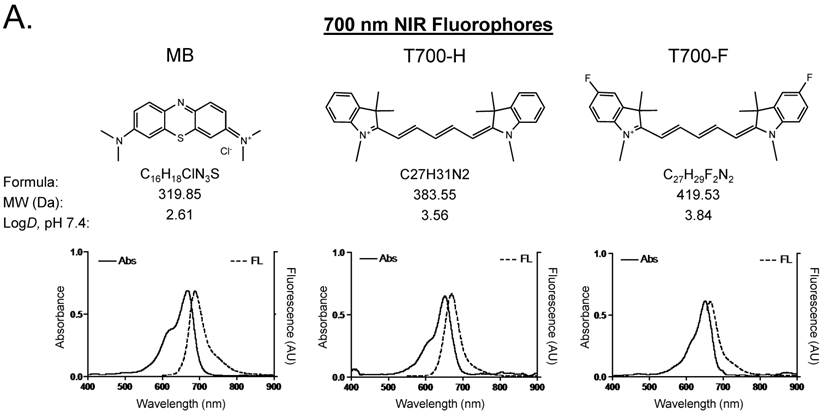 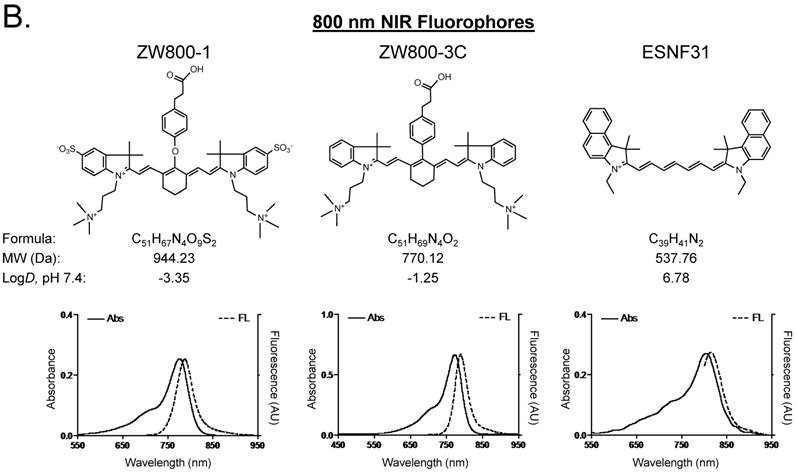 Initial in vivo screening in mice. Our NIR fluorophore library consists of over 300 novel compounds. Initial screening in mice revealed 2 pentamethine indocyanine fluorophores, T700-H and T700-F, with unusually high uptake in pancreas (Supplementary Material: Figure S1). T700-F showed a stronger pancreas signal and higher contrast to surrounding organs, such as duodenum, spleen, and liver. Both, however, also had strong kidney signal due to renal elimination. We then compared these two NIR fluorophores to clinically available MB in mice and re-measured SBR. As shown Figure 2A, T700-F showed the highest uptake in pancreas compared to others, and a significant improvement in SBR was found when compared with MB, which was injected at a 4-fold higher dose and exhibited a 10-fold shorter retention time [11]. Because T700-F demonstrated the highest SBR, we explored its dose optimization and kinetics, and expanded the study to 2 additional species, rats and pigs.

Kinetics and dose optimization of T700-F in mice. To optimize the best imaging time for pancreas (Pa), we injected 25 nmol of T700-F intravenously into CD-1 mice and measured the SBR of pancreas and surrounding tissues over the course of 24 h. As shown in Figure 2B, the highest SBR relative to liver (Li), spleen (Sp), and duodenum (Du), was achieved at 4 h post-injection although the background signal decreased continuously over time, the fluorescence signal of pancreas also diminished significantly after 4 h (Figure 2D). Therefore, dose optimization was performed at 4 h post-injection. Of note, no adverse reactions were encountered over the 24 h observation period.

For dose-optimization, we injected 5 different doses of T700-F (0, 10, 25, 50, and 100 nmol) into CD-1 mice, and images were acquired at 4 h post-injection. Signals in pancreas (Pa) increased proportionally to dose, but background signal in surrounding organs, including spleen (Sp) and duodenum (Du), rose significantly above the 25 nmol dose (Figure 2D). There was no significant difference in SBR of (Pa/Sp) and (Pa/Du) among 25 - 100 nmol groups (Figure 2C).

Intraoperative pancreas imaging and histology in rats. We compared T700-F with MB in SD rats by injecting 100 nmol of T700-F and 1.2 µmol (1.5 mg/kg) of MB, respectively (Figure 3A). Although MB highlighted the pancreas immediately after a single intravenous injection, the fluorescent signal in pancreas diminished rapidly after 15 min. Conversely, T700-F showed strong pancreas signal and low background uptake even at 4 h post-injection. After intraoperative imaging, we resected the pancreas and performed histological analysis (Figure 3B). NIR fluorescence microscopy confirmed 700 nm fluorescence signal in the resected pancreatic tissues. Both fluorophores accumulated in the intracellular space: T700-F stained both the exocrine pancreas (acini; AC) cells and islets of Langerhans (IL), while MB exhibited proportionally higher islet uptake.

In vivo pancreas imaging in pigs. To confirm that small animal results were not species-dependent, we performed pancreas imaging in 35 kg Yorkshire pigs using 164 µmol (1.5 mg/kg) of MB and 2.5 µmol of T700-F. We administered more than a 65-fold higher dose of MB, however, pancreatic contrast diminished rapidly over time while T700-F showed an extremely strong pancreas signal (Figure 4A). Although the initial uptake of T700-F in spleen was higher than in the pancreas, the fluorescence signal in spleen decreased gradually and was negligible at 60 min post-injection. Adequate SBR (Pa/Mu) of MB was only seen for the initial 15 min and the SBR decayed by 60 min to almost the pre-injection level (Figure 4B). In contrast, T700-F maintained its SBR (Pa/Mu) of ≈ 5.0 for 60 min without detectable decrease and there was a significant difference in SBR (Pa/Mu) for 1 h between MB and T700-F. We further investigated the kinetics of T700-F for up to 8 h by comparing signals in the pancreas (Pa) with surrounding tissue and organs such as muscle (Mu), spleen (Sp), lymph nodes (Ln), and kidneys (Ki) (Figure 4C). Overall T700-F showed relatively high SBRs for up to 8 h without significant decrease in the pancreatic signal except for the SBR (Pa/Ki). Of note, no adverse reactions were encountered over the 8 h observation period. 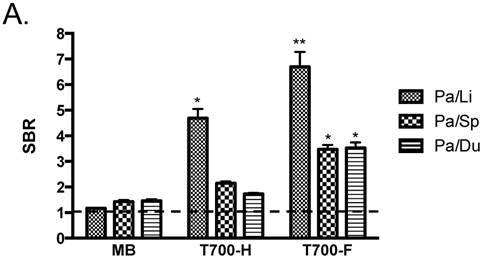 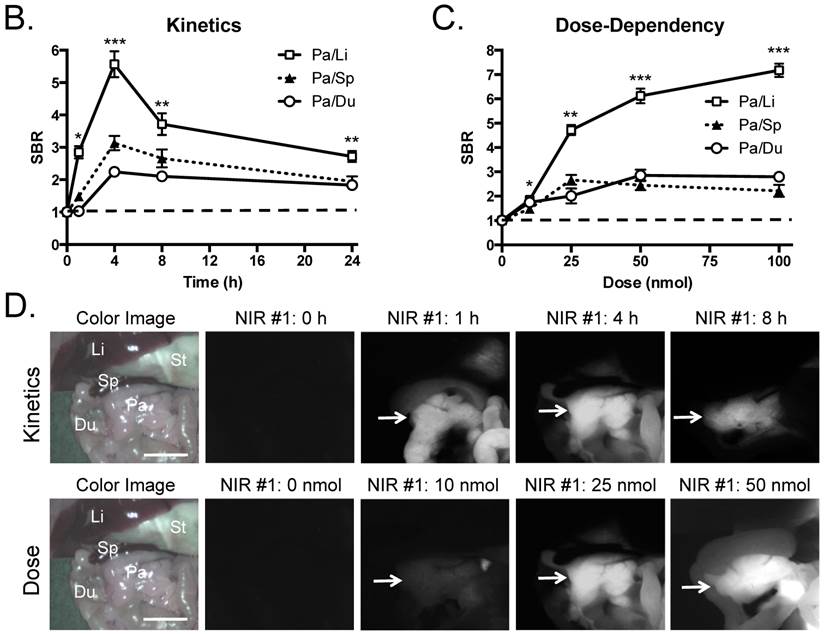 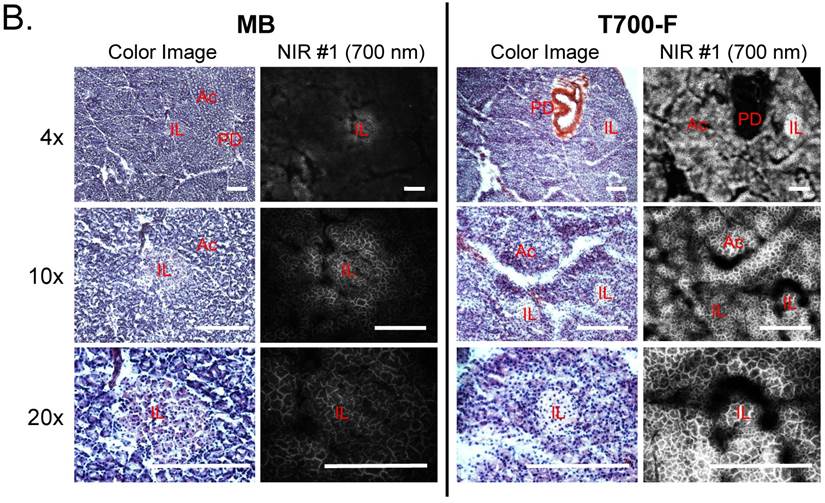 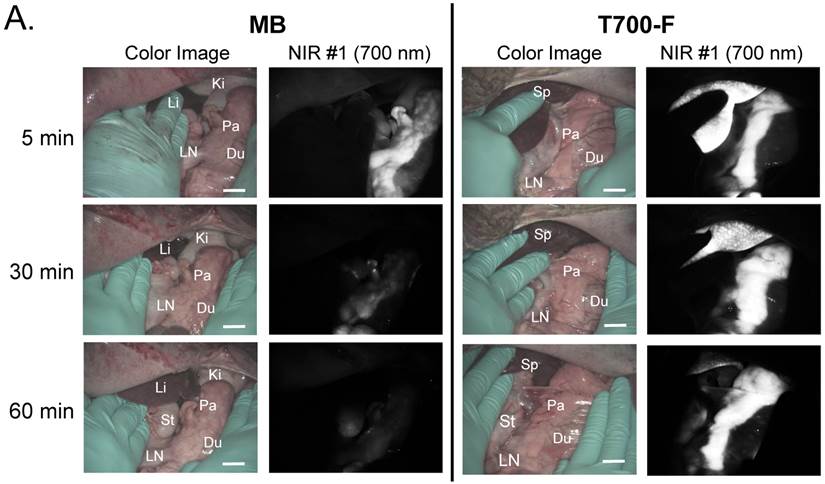 Simultaneous dual-channel imaging of pancreas for image-guided abdominal surgery. Since the proximity of the pancreas to surrounding tissues and organs, such as arteries, lymph nodes, kidneys, and adrenal glands, is the main cause of intraoperative pancreatic injury, we explored simultaneous dual-channel imaging of pancreas. With the assistance of already developed 800 nm emitting NIR fluorophores [13,15,21], the FLARE imaging system enabled 700 nm and 800 nm NIR fluorescence imaging simultaneously in real time.

Because ZW800-1 is cleared from the body via renal excretion, we continuously imaged kidneys and found that kidney signal from ZW800-1 was highest at 2 h post-injection [21]. As shown in Figure 5, this permitted unambiguous identification of the boundary of pancreas from the kidney.

In subsequent experiments, we imaged peripancreatic lymph nodes by injecting ZW800-3C along with T700-F 4 h prior to imaging [13]. Lymph nodes were clearly visualized even when obscured by overlying pancreatic tissue, with the color merged image showing all desired surgical landmarks on one screen.

Recent technical advances in abdominal surgery have made complex procedures safer and shorter. However, pancreas-related complications after gastrectomy with radical lymphadenectomy including peripancreatic lymph nodes resection, splenectomy, adrenalectomy, and nephrectomy remain unacceptably high [1,2,9,10]. Even with a magnified view provided by laparoscopy, it remains difficult to avoid pancreatic injury because of relatively poor contrast between pancreas and surrounding tissues and organs, and the inability of visible light to penetrate through blood and overlying tissue. NIR light has the potential to solve this problem because it can penetrate 5-8 mm into living tissue [28] and specific NIR contrast agents can be used to highlight specific anatomy. Importantly, NIR fluorescence imaging systems are now widely available for both open and minimally-invasive surgery. 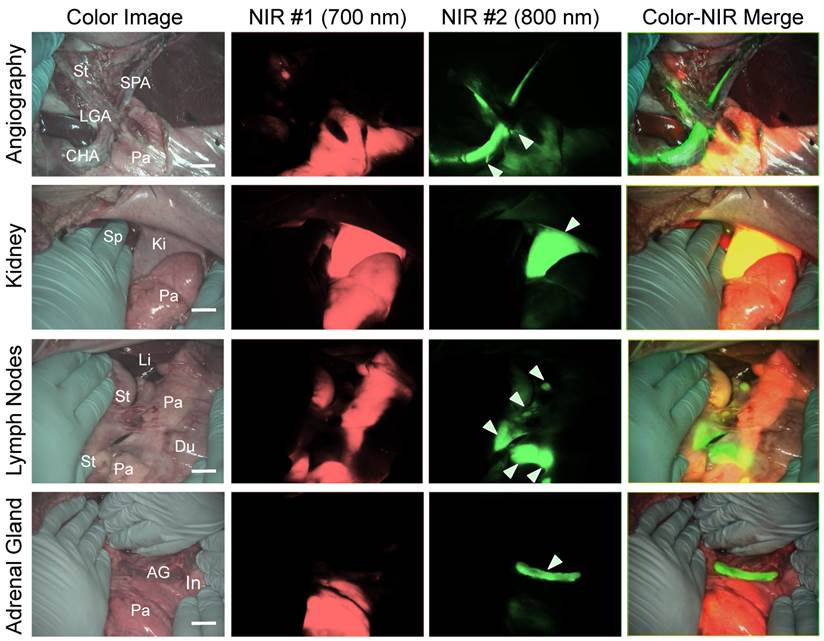 MB is a NIR fluorophore that we previously demonstrated can highlight the pancreas, and interestingly, insulinoma, however, it has relatively poor optical properties and short retention in the pancreas [11]. Out of over 300 candidates, T700-F showed significantly high uptake in pancreas and low background tissue uptake. Furthermore, its retention in pancreas was over 8 h, making this agent potentially useful in complex abdominal surgeries including laparoscopic operations (Figure 4C) [29]. Although the mechanism of specific pancreas uptake and retention of T700-F is currently unknown, it appears that the physicochemical properties of the substituted pentamethine play a key role for targeting. T700-F differs from T700-H by only 2 fluorine atoms, yet these atoms result in significantly improved pancreas selectivity.

There are some limitations, though, to the present study. First, our prototype pancreas-targeted compound T700-F emits at 700 nm where autofluorescence exists from fecal contents. A thorough bowel cleansing is therefore important. Development of an 800 nm version, which would solve this problem, is ongoing. Second, T700-F shows nonspecific uptake in kidneys, spleen, and lymph nodes and kidney, especially, has a higher signal than pancreas. However, as shown in Figure 5, this limitation is easily overcome by a low-dose injection of ZW800-1, which permits unambiguous separation of kidney from pancreas. Because first-in-human trials of ZW800-1 are imminent, it should be available for this application in the near future. Third, T700-F will require the same regulatory path as any drug prior to human use. Despite these limitations, this study lays the foundation for real-time intraoperative pancreas imaging during complex abdominal surgeries.

We thank Rita G. Laurence for assistance with animal surgery, David Burrington, Jr. for editing, and Eugenia Trabucchi for administrative assistance, and Frank Kettenring and Florin Neacsu for assistance with development and maintenance of the FLARE imaging system and software.

Funding and all other required statements

This study was supported by the following grants from the National Institutes of Health: NCI BRP grant #R01-CA-115296 (JVF), NIBIB grant #R01-EB-011523 (HSC), and a grant from the Dana Foundation (HSC). This content is solely the responsibility of the authors and does not necessarily represent the official views of the National Institutes of Health.

**This research and paper is not presented at any communications or meetings.