Progress in the Development of Nanotheranostic Systems

This is an open access article distributed under the terms of the Creative Commons Attribution (CC BY-NC) License. See http://ivyspring.com/terms for full terms and conditions.
Citation:
Cui H, Wang J. Progress in the Development of Nanotheranostic Systems. Theranostics 2016; 6(7):915-917. doi:10.7150/thno.16153. Available from https://www.thno.org/v06p0915.htm 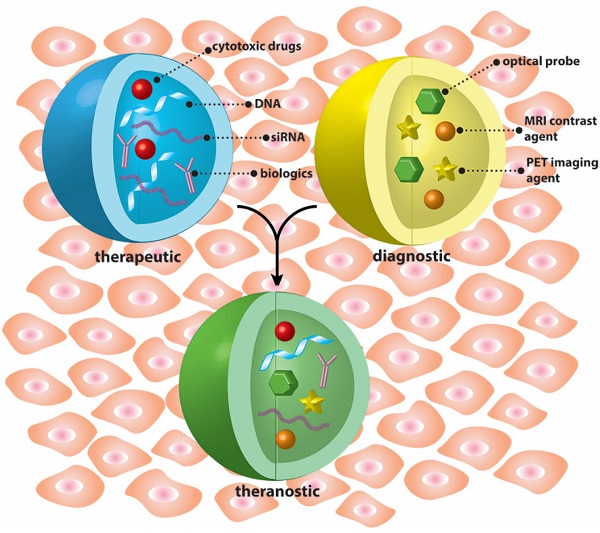 This thematic issue includes both review and research articles and is intended to provide an overview on the recent progress in the development of nanostructure-based therapeutic, diagnostic, and theranostic systems.

The advent and development of nanoscience and nanotechnology have promoted the emergence of cancer nanomedicine, an area focused on the use of well-defined nanostructures to modify a drug's pharmacokinetic profile for improved treatment. This carrier-based drug delivery strategy aims to improve the drug's specificity to target sites for minimized side effects, and also to circumvent the possible drug resistance mechanisms that tumor cells may develop over the course of the treatment. Extensive research over the past three decades has led to the creation of a plethora of carrier-based platform technologies, with a select few such as Doxil® and Abraxane® already in clinical use. However, the chemotherapeutic revolution that nanomedicines have promised has yet to come, as evidenced by the current low response rates and limited extension of patient survival. As we reflect on the successes and failures of past nanomedicine research, it is essential for the community to lay out future directions that promise far more effective chemotherapies. One potential avenue could be the concomitant or tandem use of diagnostic and therapeutic agents for personalized treatments of cancer. Indeed, advancements in the development of new imaging techniques and novel types of molecular probes have made it possible for more accurate tumor detection, cancer staging, and real-time monitoring of cancer progression and therapeutic outcomes.

A theranostic system could be interpreted as a synergistic combination of therapeutic compounds with diagnostic agents that promises better prognosis and improved treatment for diseases including cancer. Coincident with the development of nanoparticle systems for drug delivery, the development of theranostic systems have also largely benefited from advancements in nanoscience, since many nanoparticle-based delivery platforms represent a natural and logical choice for constructing nanotheranostic systems. The goal of this themed issue on NanoTheranostics is to have leading researchers in the fields of nanoscience, cancer nanomedicine, diagnostics, and imaging, discuss their most recent discoveries in associated topics, and to share their vision on the future development of this emerging field. We are very grateful that a number of highly respected scholars have contributed to the thematic issues. More so, we are delighted to have received such an overwhelming response, with the number of high quality submissions allowing us to feature this topic in two separate issues of Theranostics: this July issue and the incoming September issue.

Nanoparticles are uniquely suited for constructing theranostic systems with either tandem (Blue + Yellow) or concomitant (Green) use of therapeutic and diagnostic agents. 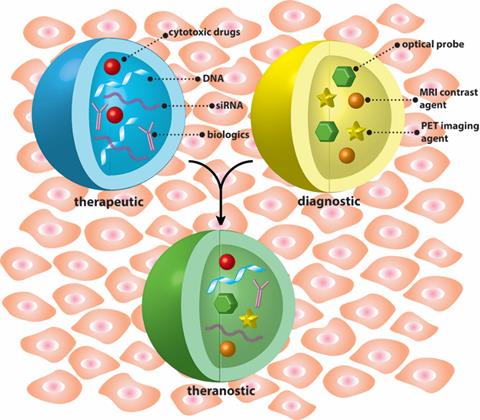 This issue begins with a review article by Satterlee and Huang, who provided an overview of the theranostic applications of the lipid-calcium-phosphate (LCP) nanoparticle platform.[1] The Huang Lab has shown that LCP nanoparticles can be used to encapsulate various types of therapeutic agents such as small molecule drugs, peptides, and DNA, as well as imaging agents such as radiometals. In this review, they highlighted the use of LCPs for single photon emission computed tomography (SPECT) and positron emission tomography (PET) imaging, and discussed the weaknesses and strengths of the LCP systems. Next, Ma et al. described the theranostic applications of dendrimeric polymers and summarized recent strategies to control the structures of dendritic polymers and theranostic-related properties. [2] In the following several contributions, Zhang et al. reviewed the recent progress in light-triggered nanotheranostics (LTN) and their applications for treating cancer.[3] LTN-mediated cancer therapy enables the visualization and treatment of tumors in a light-controlled manner with a single injection. Chen et al. discussed the advantages of click chemistry-mediated nanosensors for biochemical assays, and provided perspectives on the development of click chemistry-mediated approaches for clinical diagnosis and other biomedical applications.[4] Opoku-Damoah et al. presented a review of versatile nanotheranositic systems, with a focus on strategies featuring stimuli-responsive delivery.[5]

Drug penetration within tumor tissues is regarded as an important factor that limits the therapeutic outcomes of many drug delivery systems. Song et al. reported a Cannon and Pawn combination strategy containing both vascular disrupting agents (VDAs) and cytotoxic drugs, with the VDA acting as “cannons” to eradicate tumor cells at a distance from blood vessels, and the cytotoxic drug serving as “pawns” that kill tumor cells close to blood vessels.[8] Their in vivo studies revealed remarkable inhibition of tumor growth in solid tumor models. Treating tumors with different therapeutic approaches can efficiently improve treatment efficacy and reduce side effects. Liu and coworkers developed a polydopamine (PDA) based theranostic nano-platform.[9] The PDA nanoparticles can be simultaneously loaded with indocyanine green, doxorubicin, and manganese ions to enable imaging-guided chemo- and photothermal therapy with a remarkable synergistic therapeutic effect. Along the same lines, Cai and coworkers developed a phototheranostic nano-system that contains indocyanine green-loaded polydopamine-reduced graphene oxide nanocomposites, and explored their use for photoacoustic (PA) imaging and photothermal therapy for cancer theranostics.[10]

Stimuli-responsiveness is an important consideration in the design of drug delivery systems. Gu and coworkers reported an ATP-responsive and near-infrared (NIR)-emissive conjugated polymer-based nanocarrier system for the controlled release of anticancer drugs and real-time imaging.[11] They demonstrated that the conjugated polymeric nanocarriers could be efficiently converted to the water-soluble conjugated polyelectrolytes in an ATP-rich environment so as to facilitate the spatiotemporal release of the carried cargo. Chemical modification of small molecule hydrophobic drugs is a clinically proven prodrug strategy to achieve enhanced treatment efficacy. Cui and coworkers reported on the supramolecular design of self-assembling prodrugs (SAPD) with much-improved water solubility while maintaining high potency against cancer cells.[12] They found that camptothecin (CPT) prodrugs created by conjugating two CPT molecules onto a hydrophilic segment can associate into filamentous nanostructures in water that exhibit enhanced efficacy against primary brain cancer cells. This supramolecular strategy opens up a new avenue in prodrug design.

In summary, we hope this collection of expert reviews and research articles provides a timely update on the development of nanotheranostic systems. Research in cancer nanomedicine over the past few decades has led to significant progress, but the therapeutic outcome has yet to meet public expectation. It is clear that new, paradigm-shifting approaches should and must be developed to improve the current low response rates and also to prolong patient survival in a significant extent. As much as the goal is clear, the path remains elusive. Perhaps, new theranostic systems could represent one of the paths to reach the goal of revolutionizing cancer chemotherapy. In addition, upon publishing this Special Issue, the 1st International Symposium for Chinese American Society of Nanomedicine and Nanobiotechnology (CASNN) on Precision Nanomedicine will be concurrently held in Beijing, China on July 8-11, 2016. We are excited to have the opportunity to share with the CASNN members and meeting attendants this thematic issue on NanoTheranostics.