Catalytic nanomaterials with intrinsic enzyme-like activities, called nanozymes, have recently attracted significant research interest due to their unique advantages relative to natural enzymes and conventional artificial enzymes. Among the nanozymes developed, particular interests have been devoted to nanozymes with peroxidase mimicking activities because of their promising applications in biosensing, bioimaging, biomedicine, etc. Till now, lots of functional nanomaterials have been used to mimic peroxidase. However, few studies have focused on the Ni-based nanomaterials for peroxidase mimics. In this work, we obtained the porous LaNiO3 nanocubes with high peroxidase-like activity by inducing its 3+ oxidation state in LaNiO3 perovskite and optimizing the morphology of LaNiO3 perovskite. The peroxidase mimicking activity of the porous LaNiO3 nanocubes with Ni3+ was about 58~fold and 22~fold higher than that of NiO with Ni2+ and Ni nanoparticles with Ni0. More, the porous LaNiO3 nanocubes exhibited about 2-fold higher activity when compared with LaNiO3 nanoparticles. Based on the superior peroxidase-like activity of porous LaNiO3 nanocubes, facile colorimetric assays for H2O2, glucose, and sarcosine detection were developed. Our present work not only demonstrates a useful strategy for modulating nanozymes' activities but also provides promising bioassays for clinical diagnostics.

Natural enzymes, with remarkable catalytic efficiency and extraordinary substrate specificity, have attracted researchers' enormous interest due to their important roles not only in living systems but also in biomedical diagnostics and therapeutics.[1] However, the intrinsic shortcomings of natural enzymes such as high cost, low stability, and difficulty of recycling have impeded their practical applications. To address these drawbacks, great efforts have been devoted to searching for natural enzymes' alternatives called as “artificial enzymes”.[2-5] Recently, nanomaterials with enzyme-like characteristics, called as “nanozymes”, have been developed to act as promising artificial enzymes along with the remarkable achievements in the field of nanotechnology.[6-9] As a new type of artificial enzymes, nanozymes are advantageous over natural enzymes in several aspects such as low cost, long-term storage, and high stability. More, nanozymes are even superior to conventional artificial enzymes in their large surface area for bioconjugation, self-assembly capabilities, tunable catalytic activities, etc.[10-12] Therefore, intensive efforts have been devoted to developing functional nanomaterials for enzyme mimics in recent years.[13-27]

It has been established that bioactive small biomolecules, such as glucose and sarcosine, play critical roles in disease diagnosis.[54-58] For example, glucose is not only a well-known indicator for diabetes but also closely associated with ischemia stroke and even cancers.[59-65] Previous study also suggested that sarcosine may act as a metabolic biomarker for prostate cancer.[66] The oxidation of glucose and sarcosine with the corresponding oxidase produces H2O2. The produced H2O2 can catalytically oxidize peroxidase substrates with LaNiO3 nanocubes-based peroxidase mimics to produce colored products for signaling. Therefore, we further developed facile bioassays for glucose and sarcosine detection by combining glucose oxidase (GOx) and sarcosine oxidase (SOx) with the porous LaNiO3 nanocubes-based peroxidase mimics.

Synthesis of Porous LaNiO3 Nanocubes via a Hydrothermal Method

LaNiO3 nanocubes were synthesized as follows.[67] Briefly, the lanthanum nitrate hexahydrate (1.0 mmol), nickel nitrate hexahydrate (1.0 mmol), and glycine (4 mmol) were dissolved in 25 mL of deionized water, followed by the adding 0.3 g of PVP. After stirring for 30 min, the pH of the solution was adjusted to about 7.0 via slowly adding ammonium hydroxide. The resulting solution was transferred into a 40 mL Teflon-lined autoclave and heated at 180 °C for 24 hours. The resulting product was centrifuged and washed with deionized water and ethanol for several times, which was then dried at 60 °C for overnight. The precursor powder was finally annealed at 650 °C for 2 hours with a ramp rate of 5 °C/minute to obtain the final porous LaNiO3 nanocubes.

The LaNiO3-H2 was obtained by controlled reduction of as-prepared LaNiO3 porous nanocubes with H2 to partially form Ni2+ in the LaNiO3-H2 lattice. Specifically, the as-prepared LaNiO3 was heated to 350 °C at a ramp rate of 5 °C/minute and maintained at 350 °C for 2 hours under a forming gas of 5% H2 in Argon.

To obtain the LaNiO3-H2-Air nanocubes, the as-prepared LaNiO3-H2 nanocubes were recalcined at 650 °C in the air for 2 hours with a ramp rate of 5 °C/minute.

Synthesis of LaNiO3 Nanoparticles via a Sol-Gel Method

The LaNiO3 nanoparticles were synthesized via a conventional sol-gel strategy.[68] Briefly, lanthanum nitrate hexahydrate (1.5 mmol), nickel nitrate hexahydrate (1.5 mmol), and citric acid (12 mmol) were dissolved in 100 mL of deionized water, followed by adding 1.5 mL of ethylene glycol. Subsequently, the resulting transparent solutions were condensed at 90 °C into a gel under stirring, which were then decomposed at 180 °C for 5 hours to form solid precursors. The solid precursors were then decomposed at 400 °C for 2 hours to obtain foam-like precursors via removing the organic components. The precursors were further annealed at 700 °C for 5 hours with a ramp rate of 5 °C/minute to obtain the final LaNiO3 nanoparticles. The obtained LaNiO3 nanoparticles was denoted as LaNiO3-SG.

NiO nanoparticles were synthesized as follows.[69] 0.5 g of NaOH and 1.66 g of PVP were dissolved in 25 mL of deionized water and 1.45 g of nickel nitrate hexahydrate was dissolved in 10 mL of deionized water, respectively. The nickel nitrate aqueous solution was then added to the NaOH/PVP solution dropwise under stirring. The resulting solution was stirred for 3 hours to obtain the NiO precursor, followed by washing with H2O and ethanol for several times and drying at 60 °C overnight. Then, the precursor was annealed at 650 °C for 2 hours in air with a ramp rate of 5 °C/minute to form the final NiO nanoparticles.

Colorimetric Detection of H2O2, Glucose, and Sarcosine with the Porous LaNiO3 Nanocubes

Hela cells were incubated in High Glucose DMEM medium with 10% fetal bovine serum (FBS) at 37 °C with the atmosphere containing 5% CO2. Fresh cells were subcultured into 96 wells, and 10 μg/mL lipopolysaccharides (LPS) was used to incubate with cells overnight. Then, 40 μg/mL LaNiO3 and 0.5 mM TMB were added into the cells. The cells solution was incubated for 10 min and the absorbance values at 652 nm were measured. 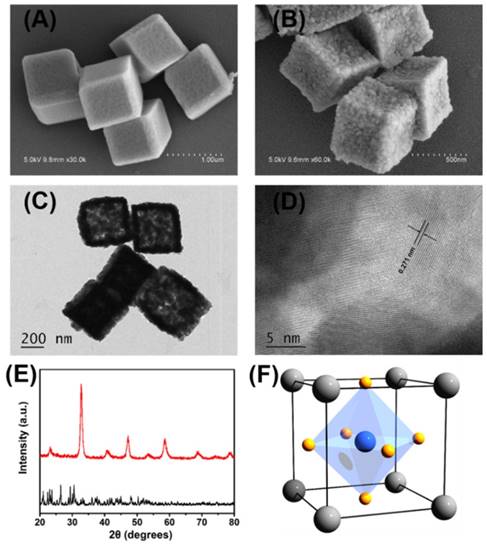 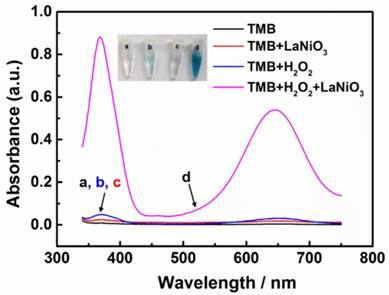 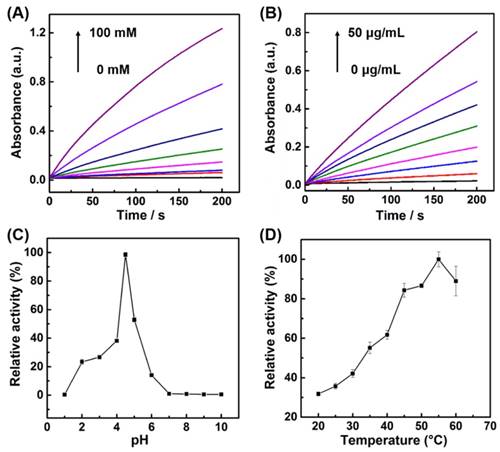 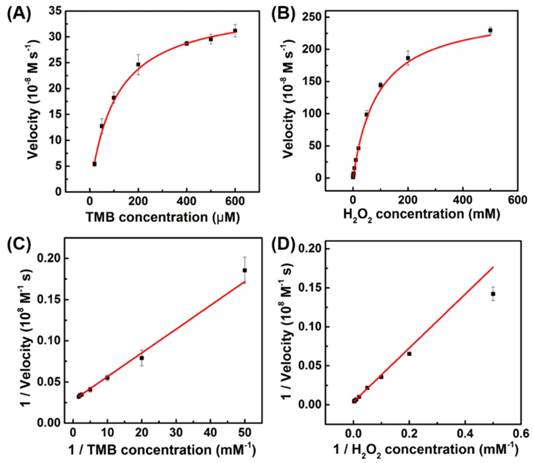 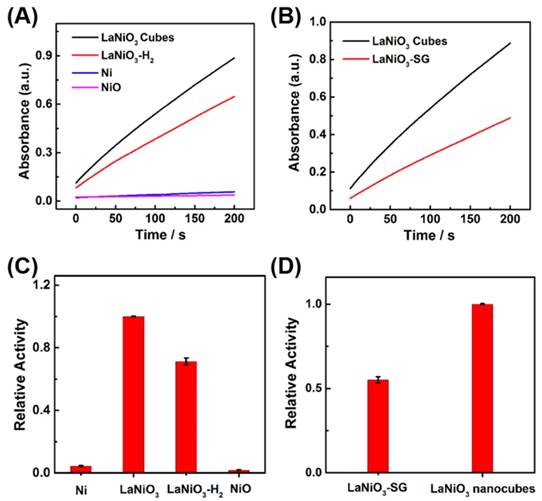 Therefore, the porous LaNiO3 nanocubes with the highest peroxidase mimicking activity were obtained by inducing its 3+ oxidation state of nickel atom in LaNiO3 perovskite and optimizing the morphology of nanomaterials.

Detection of H2O2, Glucose, and Sarcosine

On the basis of the highest intrinsic peroxidase-like activity of the porous LaNiO3 nanocubes, we developed colorimetric assays for H2O2, glucose, and sarcosine detection. As demonstrated above, the peroxidase-like activity of porous LaNiO3 nanocubes was dependent on the H2O2 concentrations, which can be used to detect H2O2 by monitoring the absorbance of TMB at 652 nm. As seen in Figure S10A and Figure S10B, the intensity of absorption peak at 652 nm increased with the increase of H2O2 concentration from 0 μM to 1000 μM. Figure S10C and Figure S10D exhibited good linearity relationships between the absorbance intensity at 652 nm and the H2O2 concentrations from 0 μM to 30 μM and 40 μM to 500 μM.

The glucose detection was then carried out by coupling cascade reactions of the glucose oxidation catalyzed by GOx and the TMB oxidation catalyzed by LaNiO3 nanocubes (Figure S11). First, GOx catalyzed the glucose oxidation with O2 to produce H2O2; then, the LaNiO3 nanocubes catalyzed the TMB oxidation with the in situ generated H2O2. Therefore, glucose could be determined by monitoring the absorbance of TMB at 652 nm. Figure 6A showed that the absorbance intensity exhibited a good response to glucose concentration from 2 μM to 1000 μM. A linear range from 10 μM to 50 μM and a detection limit of 8.16 μM were obtained for glucose detection. Control experiments were performed to evaluate the selectivity of the developed colorimetric assay for glucose by using other sugars such as fructose, lactose, and sucrose. As showed in Figure 6B, the other glucose analogues with a high concentration of 5 mM exhibited a negligible absorbance when compared with that of 1 mM glucose. This result demonstrated that the developed colorimetric assay had a good selectivity for glucose detection because of the high specificity of GOx for catalytic glucose oxidation.

(A) Dependence of A652 for monitoring the catalytic oxidation of TMB on the concentration of glucose from 2 μM to 1 mM. The inset shows the linear calibration plot between the concentration of glucose and the absorbance at 652 nm. (B) Selectivity of glucose detection with the porous LaNiO3 nanocubes. Absorbance of TMB at 652 nm in the absence and presence of 5 mM fructose, 5mM lactose, 5 mM sucrose, and 1 mM glucose.

This is an open access article distributed under the terms of the Creative Commons Attribution (CC BY-NC) license (https://creativecommons.org/licenses/by-nc/4.0/). See http://ivyspring.com/terms for full terms and conditions.