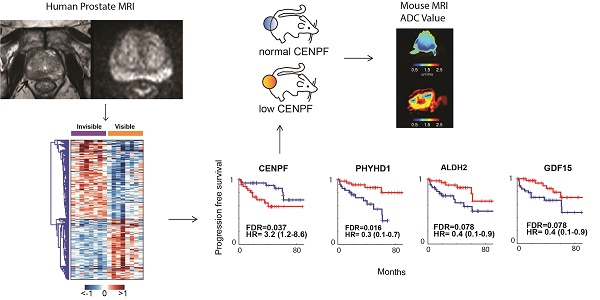 MRI is used to image prostate cancer and target tumors for biopsy or therapeutic ablation. The objective was to understand the biology of tumors not visible on MRI that may go undiagnosed and untreated.

Methods: Prostate cancers visible or invisible on multiparametric MRI were macrodissected and examined by RNAseq. Differentially expressed genes (DEGs) based on MRI visibility status were cross-referenced with publicly available gene expression databases to identify genes associated with disease progression. Genes with potential roles in determining MRI visibility and disease progression were knocked down in murine prostate cancer xenografts, and imaged by MRI.