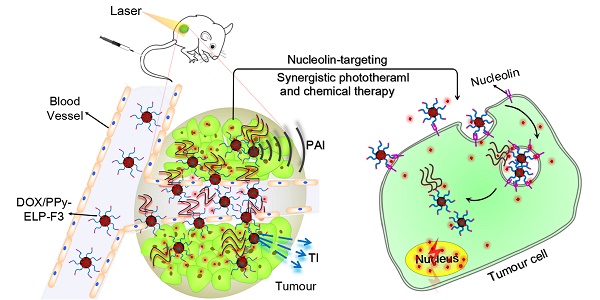 Near-infrared (NIR)-absorbing conjugated polymer nanoparticles are interesting for imaging-guided combination therapy, especially for synergistic photothermal therapy and chemotherapy; however, most of them target tumours passively through the enhanced permeability and retention (EPR) effect, leading to low utilization efficiency. To address this problem, we report an active tumour-targeting strategy of tumour-homing chimeric polypeptide-conjugated NIR-absorbing conjugated-polymer nanoparticles as a new class of drug nanocarriers for imaging-guided combination therapy of cancer.

Methods: A tumour-homing chimeric polypeptide C-ELP-F3 was genetically engineered, and chemoselectively conjugated to polypyrrole (PPy) nanoparticles via a facile thiol-maleimide coupling reaction to form ELP-F3 conjugated PPy (PPy-ELP-F3) nanoparticles. Doxorubicin (DOX) was physically adsorbed onto PPy-ELP-F3 nanoparticles to yield DOX-loaded PPy-ELP-F3 (DOX/PPy-ELP-F3) nanoparticles. The physicochemical properties of DOX/PPy-ELP-F3 were characterized. The pharmacokinetics of DOX/PPy-ELP-F3 was studied in a mouse model. The photoacoustic imaging and photothermal imaging of tumours were tested in a melanoma-bearing mouse model. The photothermal-chemical combination therapy of tumours was investigated by using melanoma cells in vitro and in a melanoma-bearing mouse model.

Near infrared (NIR) light can be focused on a specific region with easy operation, and can noninvasively penetrate into reasonably deep tissues due to its minimal absorbance by skin and tissues [1]. These characteristics of NIR light render NIR-absorbing photothermal agents crucial for photothermal therapy in which NIR light can be absorbed and transformed into heat efficiently to ablate cancer cells [2-8]. NIR-absorbing organic nanomaterials are generally less toxic and more biocompatible than inorganic ones [9,10], so several NIR-absorbing conjugated polymers, such as polypyrrole (PPy) [11-15], polyaniline [16] and poly(3,4-ethylenedioxythiophene):poly(4-styre-nesulfonate) (PEDOT:PSS) [17] have recently attracted much attention as a new class of photothermal agents for cancer therapy. Furthermore, conjugated polymer nanoparticles have been explored as drug carriers for combined photothermal and chemical/photodynamic/radioisotope therapy of cancer [18-23]. Drugs such as doxorubicin (DOX) and porphyrin can be loaded into these conjugated polymer nanoparticles through π-π stacking. The photothermal effect of the conjugated polymer nanoparticles can be used to not only directly kill cancer cells by hyperthermia, but also trigger the on-demand release of drugs from the nanoparticles or enhance the cellular uptake of drugs loaded in the nanocarriers to significantly improve the efficacy of chemical or photodynamic therapy.

These conjugated polymer nanoparticles usually accumulate in the tumour via the enhanced permeability and retention (EPR) effect [11,12,14-20,22]. However, the passive tumour-targeting mechanism of nanomedicines through the EPR effect offers low tumour-targeting efficiency, which is suboptimal for targeted tumour therapy. To address this problem, herein we report an active tumour-targeting strategy to design tumour-homing chimeric polypeptide-conjugated NIR-absorbing conjugated-polymer nanoparticles as a new class of drug nanocarriers for imaging-guided combination therapy of cancer.

F3 is the N-terminal fragment of human high-mobility group protein 2 (HMGN2) [24]. Through specific binding to nucleolin expressed on the membrane of tumour cells and tumour endothelial cells, F3 can be internalized into the targeted cells and translocated to the nucleus. Elastin-like polypeptides (ELPs) are a class of biopolymers composed of a VPGXG repeat unit derived from human tropoelastin, in which X can be any amino acid except proline [25]. ELPs have been used as a new class of biomaterials for drug delivery [26,27], due to their precise control of structure and properties at the gene level, biodegradability, and excellent biocompatibility [28-30]. In our previous work, F3 was genetically fused with an ELP appended with a cysteine-rich amino acid sequence (Gly-Gly-Cys)8 (C8) to yield a tumour-homing chimeric polypeptide F3-ELP-C8 [31]. F3-ELP-C8 was chemoselectively conjugated with DOX at the site of C8 to form tumour-homing and pH-responsive F3-ELP-DOX nanoparticles for targeted chemotherapy of cancer.

In this study, F3 was genetically fused to the C-terminus of an ELP with a cysteine residue at the N-terminus (C-ELP) to form a tumour-homing chimeric polypeptide C-ELP-F3. C-ELP-F3 was chemoselectively conjugated to PPy nanoparticles via a facile thiol-maleimide coupling reaction to form ELP-F3-conjugated PPy nanoparticles (PPy-ELP-F3) (Figure 1A). PPy-ELP-F3 were explored as an active tumour-targeting drug carrier to load DOX through π-π stacking to yield DOX-loaded PPy-ELP-F3 (DOX/PPy-ELP-F3). DOX/PPy-ELP-F3 showed more cytotoxicity to cancer cells in vitro than both DOX/PPy-ELP without the tumour-homing function and free DOX, and more accumulation in tumours in vivo. More importantly, under the guidance of photoacoustic and photothermal imaging, a synergistic photothermal and chemical therapy in which tumours were completely abolished without detectable systemic toxicity was achieved by DOX/PPy-ELP-F3 rather than DOX/PPy-ELP (Figure 1B).

Synthesis and characterization of DOX/PPy-ELP-F3 nanoparticles 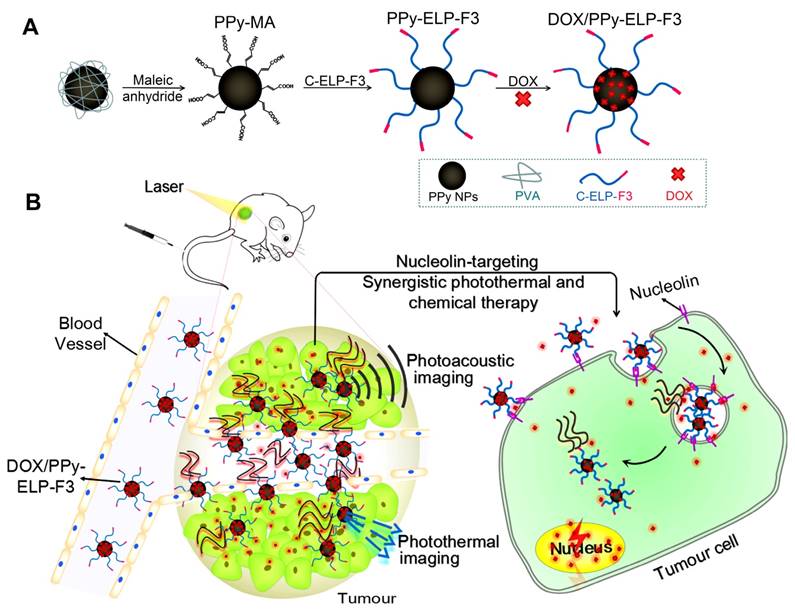 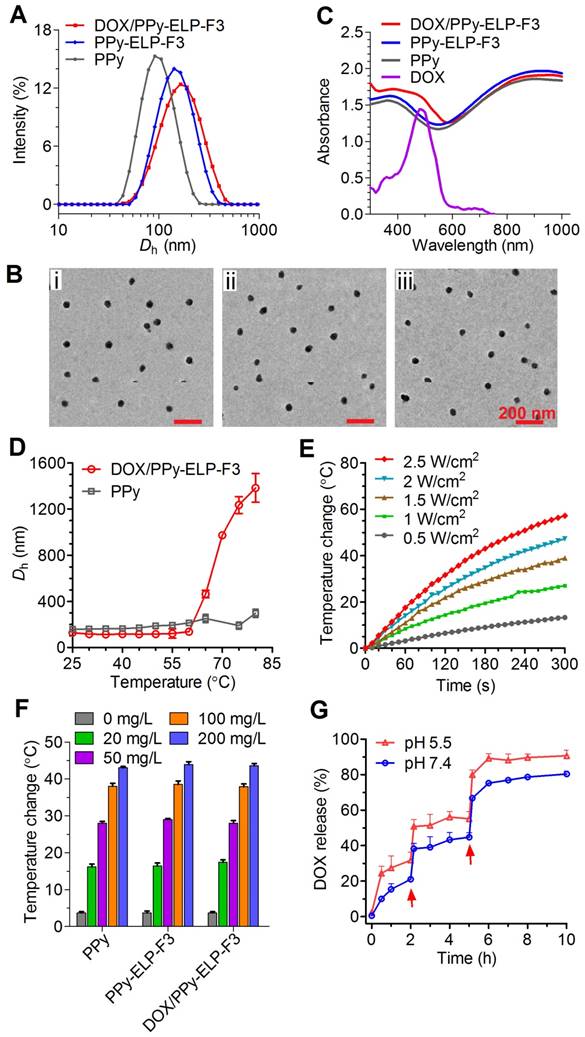 Investigation of in vitro synergistic photothermal and chemical therapy

In vivo pharmacokinetics, biodistribution and imaging 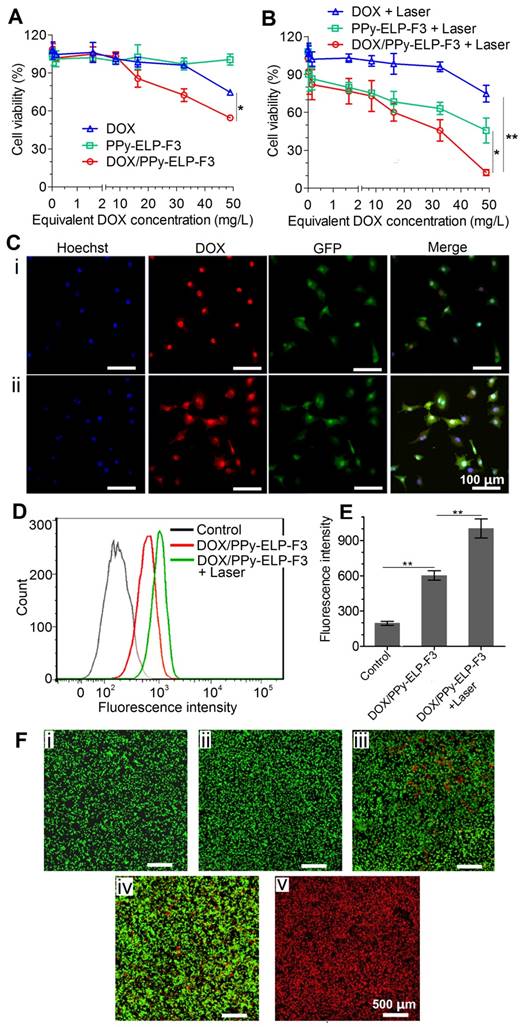 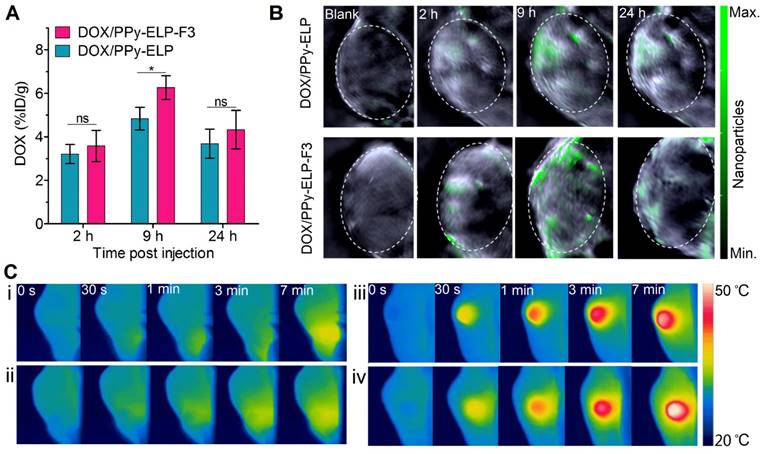 This paper has reported an active tumour targeting strategy to design a new class of multifunctional nanomedicines such as DOX/PPy-ELP-F3 for photoacoustic and thermal imaging-guided synergistic photothermal and chemical therapy of cancer. These new nanomedicines exhibit intriguing attributes for cancer therapy. First, tumour-homing chimeric polypeptides can be various [31,34]; particularly, the tumour-homing moiety can be one of dozens of tumour-homing peptides [35]. Second, ELP-based tumour-homing chimeric polypeptides can be genetically engineered with precisely defined structures and functions. 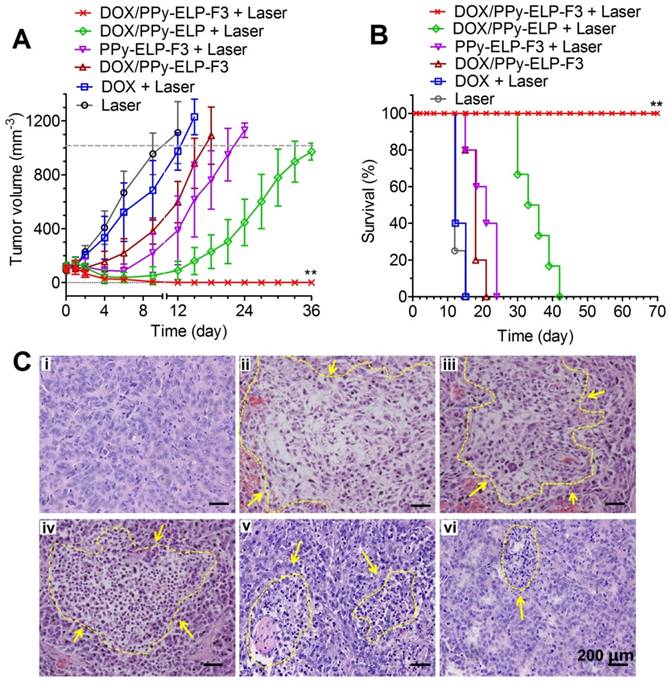 Particularly, these polypeptides can be produced in E. coli and easily purified by a facile non-chromatographic method of ITC. They are biocompatible and biodegradable [28-31,35]. Third, these polypeptides can be chemoselectively conjugated to NIR-absorbing conjugated polymer nanoparticles to form a new class of multifunctional drug carriers. Fourth, a variety of drugs can be readily loaded onto the nanocarriers by physical and/or chemical interactions between the drugs and conjugated polymer nanoparticles. Fourth, the nanocarriers can significantly improve the pharmacokinetics, biodistribution and therapeutic effect of the drugs. Particularly, the photothermal effect of the nanocarriers can trigger the release of drugs and enable imaging-guided synergistic photothermal and chemical therapy of cancer in which tumours can be completely abolished. The tunable, well-defined, versatile, highly efficient characteristics of tumour-homing chimeric polypeptide-conjugated NIR-absorbing conjugated-polymer nanoparticles make them interesting as a new class of multifunctional drug carriers for imaging-guided combination therapy of cancer.

Construction and purification of C-ELP-F3

The recombinant plasmid was transformed into Escherichia coli BL21 (DE3) competents (Invitrogen) and C-ELP-F3 was further purified by inverse transition cycling (ITC) method [37], as described in our previous paper [38]. The concentration of purified C-ELP-F3 was determined by absorbance at 280 nm. The purity was further determined on sodium dodecyl sulfate polyacrylamide gel electrophoresis (SDS-PAGE). Similarly, C-ELP was synthesized by the same method as above.

PPy-MA were first allowed to react with C-ELP-F3. C-ELP-F3 solution was added to 10 mL PPy-MA (10 mg) in PBS to a final concentration of 20 μM, and stirred vigorously for 24 h. For loading of doxorubicin (DOX), 3 mg DOX in 300 μL DMSO was added to the mixture with stirring for another 7 h. DOX/PPy-ELP-F3 was collected by centrifugation (12500 rcf for 30 min, 15 ℃) and re-dispersed in PBS for further use. The loading capacity was determined by the following equation:

The hydrodynamic size and surface charge (zeta potential) were evaluated with a Nano Zeta Sizer (Malvern Instruments, Worcestershire, UK) at 25 ℃. UV-vis spectra were recorded on a SpectraMax® M3 Microplate Reader (Molecular Devices) in concert with Softmax Pro. Particle size and surface morphology were observed by Hitichi-H-7650B transmission electron microscopy (TEM). To investigate the thermoresponsive behavior of DOX/PPy-ELP-F3, samples were allowed to incubate at different temperatures (from 25 ℃ to 80 ℃) and analyzed by DLS, and hydrodynamic diameters (Dh) were monitored every 5 ℃.

1 mL sample in a disposable cuvette was exposed to an 808 nm laser at a power density of 1.5 W/cm2. Temperature change was measured by a digital thermometer every 10 s. PBS was used as the control.

To evaluate in vitro DOX release from nanoparticles, DOX/PPy-ELP-F3 in dialysis bags was immersed in 50 mM PBS of pH 5.5 or pH 7.4 at 37 ℃ (dialysis bag: MWCO 100 kDa). The released DOX in the dialysate was collected and determined by absorbance at 480 nm (OD480). For in vitro NIR-triggered DOX release, samples were exposed to laser irradiation for 5 min (808 nm, 1.0 W/cm2) at the time points of 2 h and 5 h. After dialysis for another 3 min, the cumulative released DOX was collected immediately.

In vitro photothermal and chemical therapy

In vitro synergistic photothermal and chemical therapy was performed in a 35 mm plate with 2×105 C8161 cells, and PPy-ELP-F3 or DOX/PPy-ELP-F3 was added and incubated for 4 h. Then, a NIR laser (808 nm, 2.5 W/cm2) was used to irradiate cells for 3 min, followed by propidium iodide (PI) staining. Cell viability was observed using a laser scanning confocal microscope (LSM780, Zeiss), where living cells had green fluorescence from GFP and dead ones stained by PI had red fluorescence. Other groups were operated in the same method as described above.

For cell proliferation assay, C8161 cells in 96-well plates (4000 cells/well) were incubated with DOX, PPy-ELP-F3 and DOX/PPy-ELP-F3 in concentration gradients for 4 h. the 808 nm laser irradiation was 2.5 W/cm2 for 3 min. Cytotoxicity was determined by MTS assay.

Murine fibroblasts L929 cells, human mammary epithelial MCF-10A cells and human microvascular endothelial cells (HMECs) were used for biocompatibility assay. Briefly, cells were plated in a 96-well plate at a density of 5000 cells/well, and then fresh medium containing PPy-ELP-F3 at final concentrations of 0/100/200/300/600/800 mg/L was added. After 48 h, cell viability was determined by standard MTS assay as described above.

Female BALB/c nude mice were obtained from Vital River Laboratories (Beijing, China), and female BALB/c mice were from AniKeeper (Beijing, China). All mice were raised in the animal research facility of Tsinghua University. The Laboratory Animal Facility at the Tsinghua University was accredited by AAALAC (Association for Assessment and Accreditation of Laboratory Animal Care International), and all animal use protocols used in this study were approved by the Institutional Animal Care and Use Committee (IACUC). For building tumour-bearing models, female BALB/c nude mice 6 weeks of age were subcutaneously inoculated with a C8161 cells suspension (2 × 106) on the back. When the tumours reached a size of 100-120 mm3, C8161 tumour-bearing mice were available for further use.

For photoacoustic imaging, C8161 tumour-bearing mice were intravenously injected with 1 mg DOX/PPy-ELP-F3 or DOX/PPy-ELP. After 2 h, 9 h and 24 h, mice were anesthetized and imaged by a MSOT inVision 512-echo system (iTheraMedical, German) equipped with a 5 MHz, 128-element linear array transducer.

To visually determine the photothermal effect of nanoparticles on tumours, C8161 tumour-bearing mice were injected with saline, DOX, DOX/PPy-ELP and DOX/PPy-ELP-F3 (equivalent 2 mg PPy and 0.4 mg DOX) via the tail vein. After 9 h, mice were anesthetized and exposed to a 808 nm laser (1.2 W/cm2, 7 min). During the irradiation, mice were imaged with a GF300 infrared camera (FLIR) to record the tumour local temperature change.

In vivo photothermal and chemical therapy

For pharmacokinetic study, female BALB/c mice were intravenously injected with DOX/PPy-ELP-F3, DOX/PPy-ELP and DOX at an equivalent dose of 5 mg DOX/kg body weight through the tail vein. At 1/5/15/30 min and 1/2/4/8/24/48 h post injection, blood samples were collected to obtain plasma. DOX in 10 μL plasma was extracted by 190 μL of acidified isopropanol (0.075 M HCl, 10% water) at -20 ℃. DOX in the supernatant was measured by fluorescence (Ex: 488 nm, Em: 590 nm). The quantity was calculated from a linear standard curve of DOX concentrations from 0.001 μM to 10 μM. Each group had three parallel experiments. Plasma from a drug-free mouse was used as the background.

Hematoxylin-eosin (H&E) staining was used to assess the damage to tumours and organs. Tumours from mice on the 2nd day post treatment were collected. Hearts, livers, spleens, lungs and kidneys were collected on the 12th day post treatment. The obtained tumours and organs were used for H&E staining assay and observed under an inverted microscope (Eclipse 90i, Nikon, Japan).

For standard serum biochemistry analysis, 80 μL of blood samples from mice on the 12th day post treatment with “DOX/PPy-ELP-F3 plus laser irradiation” were collected. To analyze the clinical biochemistry parameters, 300 μL of blood samples were collected retro-orbitally to collect plasma. All blood assays were operated at Tsinghua Hospital. Blood samples from mice treated with “PPy-ELP-F3 plus irradiation” and normal mice were used as controls. Each group had three parallel experiments.

The authors thank Prof. X. Guo from the Department of Advanced Interdisciplinary Studies, Beijing Institute of Basic Medical Sciences, and Prof. J. Liu from the Department of Biomedical Engineering, School of Medicine, Tsinghua University. This study was financially supported by grants from the National Natural Science Foundation of China (21534006) and Beijing Natural Science Foundation (2172028).