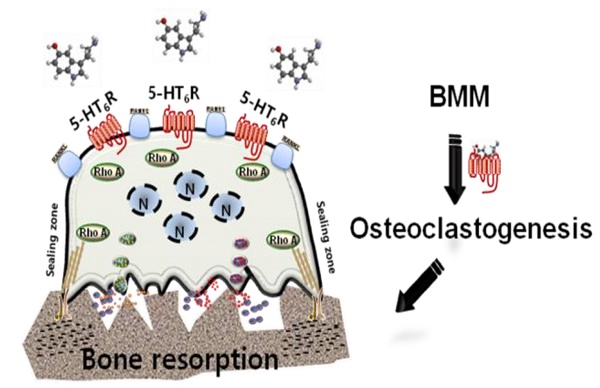 Rationale: Characterizing the regulation of bone-resorbing osteoclasts is central to the understanding of the pathogenesis and treatment of bone diseases, such as osteoporosis and periodontitis. 5-hydroxytryptamine (5-HT) has drawn considerable attention for its role in bone; however, it remains unknown whether the intracellular signaling of 5-HT receptors (5-HTRs) is linked to any of the regulatory mechanisms in osteoclasts. Herein, we report 5-HT6R to be a key regulatory receptor for osteoclastogenesis.

Conclusion: Taken together, our findings place the 5-HT6R system in a new context of osteoclast lineages in both an in vitro and in vivo system, and also it may offer a novel molecular target for the treatment of bone diseases.