On the Lipophilic Nature of Autoreactive IgE in Chronic Spontaneous Urticaria

Conclusion: We believe that these novel observations about CSU autoreactive IgE, particularly the finding that it is more lipophilic than that of IgE from healthy individuals, will lead to the development of new diagnostic tests and therapies for autoreactive IgE-mediated diseases.

Chronic spontaneous urticaria (CSU) is an itching, mast cell-driven skin disease characterized by the recurrence of transient wheals, angioedema, or both for more than six weeks [1]. Although CSU is a multifactorial condition involving autoimmunity, coagulation and inflammation [2], IgE-mediated autoimmunity, or autoallergy, is thought to play a major role [3, 4]. This is supported by the following evidences: (i) clinical effectiveness of omalizumab (anti-IgE) in relieving the symptoms of CSU; (ii) scientific observations that CSU patients have higher levels of total IgE than healthy individuals; and (iii) elevated levels of IgE are directed, for example, to thyroid antigens and double-stranded DNA [5, 6]. The last mentioned of these observations has been extended recently by the finding in CSU patients, using protein microarray analysis, of over 200 IgE-autoantigens that are not recognized by healthy controls and that IL-24 is a common, specific, and functional autoantigen of IgE antibodies in patients with CSU [7].

Considering the stronger and broader response to autoallergens in CSU patients as compared with healthy controls, we postulate that CSU is, in at least a subset of patients, an autoallergic disease in which most of the IgE could be of an autoreactive nature. This is of clinical relevance as autoreactive IgE correlates with severity of disease [4] and results in therapeutic consequences [8]. A closer understanding of autoreactive IgE in CSU will pave the way for the development of new diagnostic tests and therapies that will increase the effectiveness of management of the disease.

While the amino acid composition and the resulting physicochemical properties of allergens are quite diverse, cross-reactive, multi-specific IgE has been shown to favour lipophilic ligand-binding interactions [9, 10]. As autoreactivity is often accompanied with cross-reactivity [11, 12], we postulate that the corresponding autoantibody will also be lipophilic.

In this project, we reanalysed a large screening database of autoreactive IgE in CSU patients [7] to calculate total autoreactive IgE levels. Also, we developed an IgE-lipophilicity assay using the fluorescent dye NanoOrange, which binds to lipophilic regions of proteins, resulting in an enhancement of fluorescence [13, 14], to determine lipophilicity of IgE from CSU patients and healthy controls.

CSU patients were recruited from our specialized outpatient clinic for Dermatological Allergology at Charité-Universitätsmedizin Berlin. They had been diagnosed with CSU in line with the current EAACI/GA2LEN/EDF/WAO urticaria guideline [1]. The mean duration of CSU was 5.8 ± 6.5 years and the mean seven-day urticaria activity score [1] was 25 ± 9. All had been treated previously with H1-antihistamines. None had received treatment with anti-IgE or similar agents.

Blood was taken from all study subjects and serum separated after clot formation without the use of a clotting enhancer. After separation, serum was frozen immediately and stored at -80 °C until use.

Blood samples taken from patients and all material investigated in this study were used after written informed consent was obtained, as approved by the ethics committee of the Charité-Universitätsmedizin Berlin (EA1-329-14 and EA1-292-14) according to the Declaration of Helsinki (59th WMA General Assembly, Seoul, October 2008).

To assess serum autoallergen levels, we reanalysed the Auto-IgEome data base, which has been published previously [7]. Total IgE levels measured by the Central Laboratory of Charité-Universitätsmedizin Berlin were used to calculate the percentage of autoreactive IgE.

Principal Component Analyses (PCA) and heatmap visualisation were performed using 'ClustVis' [15]. IgE-binding signals to 9374 full-length human proteins as assessed by microarray [7] from seven CSU patients and seven healthy controls were analysed by PCA. Singular value decomposition was used to calculate principal components (PC). The PCA-plot shows PC1 and PC2 indicating 24% and 18.2% of the total variance, respectively. Mean values of the IgE-binding signals for each autoantigen were calculated separately for each sample from both CSU patients and healthy controls. Thirty autoantigens with the highest mean total IgE-binding signal from each group were chosen to generate a heat map and a dendrogram (average linkage). IgE-binding signals were expressed as Z-scores. The rows were labelled with the corresponding GenBank identification number for each autoantigen.

Sixteen micrograms of anti-IgE (MHE-18, Biolegend, San Diego, USA) was dispensed in 10 mL Coating Buffer (0.1 M carbonate at pH 9, Merck, Darmstadt, Germany) and 25 μL of this solution was used to coat each well of a black NUNC Maxisorb 384-well plate (Thermofisher, Waltham, USA) at 4 °C overnight. After blocking with 2% human albumin (clinical grade, Baxter, Unterschleißheim, Germany) in TPBS (PBS with 0.05% Tween-20, Merck) overnight at 4 °C, 25 μL human serum was added per well with four replicates and incubated 1 h at room temperature followed by three washes with TPBS and two washes with water. NanoOrange (Thermofisher) dye was processed according to the product instructions (NanoOrange Protein Quantitation Kit, Thermofisher). 5 mL of 1× NanoOrange reagent working solution was prepared and 10 μL of this solution was used per well (without previous heat denaturation of the sample) and incubated for 30 min at room temperature in the dark. The plates were measured in a Victor V reader (Perkin Elmer, Waltham, USA) with standard settings and the results are expressed as counts per second. The percentage of the signal from the maximum signal (maximum signal was set to 100%) of each test was calculated to normalize results from different reproductions.

Normal distribution was tested using D'Agostino-Pearson omnibus test and an approximately Gaussian distribution served as the basis to perform Student's t-tests corrected for multiple testing by the Holm-Sidak method. The null hypothesis of random results was rejected if the P-value was < 0.05. Statistical differences between results that were not normally distributed were calculated using the Mann Whitney U test.

The majority of IgE in CSU patients is autoreactive IgE

A heat map visualization of the 30 most often recognised, but not necessarily the strongest, autoantigens of IgE from seven CSU patients and the 30 most often recognised autoantigens by IgE from seven healthy controls is shown in Figure 2A. Cluster analysis of these 60 autoantigens results in two different autoantigen groups with little crossover, as indicated by the dendrogram. Visualization of IgE-binding signals to all 9374 full-length human proteins tested using PCA shows again two different autoantigen groups. The CSU patients form a more heterogeneous group, indicated by the wide spread of the data points as compared with the healthy controls (Figure 2B). 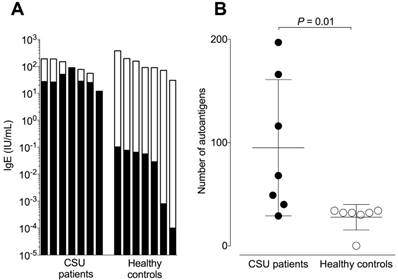 Increased lipophilicity is a feature of IgE in CSU patients

Levels of lipophilic IgE (expressed as a percentage of the maximum signal) were assessed in three independent reproductions. The pooled data with a total of 232 tested CSU patients and 173 healthy controls are shown in Figure 3. The median (with 10-90% percentiles) serum level of lipophilic IgE was 39% (38-40%) in CSU patients, 1.4-fold higher than the 28% (26-29%) in healthy controls (P < 0.0001, Figure 3A-B). ROC-analysis showed a sensitivity of 80% and specificity of 72% (pooled data, Figure 3C) for elevated lipophilicity (cut-off 31% of maximum signal) as determined by use of the Youden Index.

Correlation between autoreactive IgE and IgE-anti-IL-24 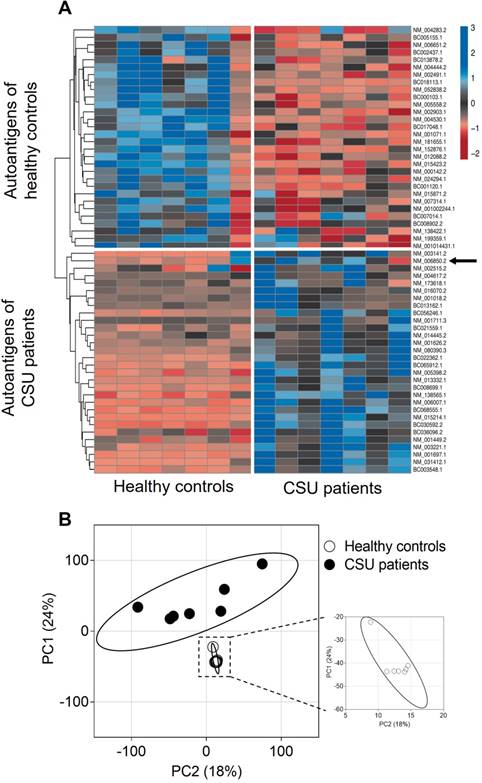 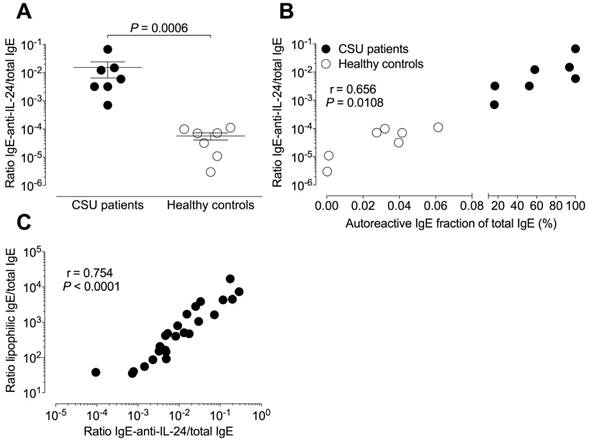 The list of diseases in which IgE autoantibodies have been identified is growing and includes atopic dermatitis, pemphigus vulgaris, systemic lupus erythematosus and bullous pemphigoid [4]. Determination of autoreactive IgE levels is of great interest as there is a significant correlation with disease activity [16-19], and autoreactive IgE has implications for therapeutic decision making, for example whether to use omalizumab (anti-IgE) in bullous pemphigoid [8]. In CSU, the prevalence of autoreactive IgE to tissue factor and thyroglobulin is linked to disease activity and is decreased after disease remission following omalizumab treatment [20]. Calculation of the concentration of autoreactive IgE in the sera of CSU patients revealed that it comprised a mean of over 60% of total IgE compared with 0.03% in sera from healthy controls. Similar high amounts of reactive IgE have been reported previously in patients allergic to hydrophobic cyclohexenyl drugs such as propofol [21]. These striking results show the impact of IgE autoantibodies in CSU and the importance of understanding this immune dysregulation.

The large difference between autoreactivity of IgE from CSU patients and healthy controls is an outstanding feature compared with autoreactive IgG patterns [25-30]. However, allergic IgE shows a similar pattern [31]. Full sets of antigens are recognized by IgE from certain individuals, suggesting polyreactive IgE [32]. As IgE, and especially autoreactive IgE, is polyreactive [33, 34], it is possible that one or a few IgE clones are present in healthy controls, which are reactive against the set of autoantigens, or that there are many auto-IgE clones, each one being specific for one or a few autoantigens. However, as almost all of this “normal” autoreactive IgE is not present in CSU patients anymore and a completely new pattern of reactivity is visible, it is more likely that there is only a very limited number of autoreactive IgE clones present, which are poly-autoreactive and which change or are removed as CSU ensues. It is less likely that suddenly all of many normal auto-IgE clones are nearly completely gone in CSU and replaced by a full new set of many CSU auto-IgE clones.

For further analyses of these two observed features, we used IgE-anti-IL-24 as a surrogate marker for autoreactive IgE. Instead of absolute IgE levels, we used relative total IgE levels as they better reflect the physiological conditions and distribution of IgE bound to mast cells [40]. IgE lipophilicity correlates highly significantly with this surrogate marker, suggesting a connection between the autoreactivity and lipophilicity of IgE in CSU patients. This may be a future parameter for general autoreactivity of IgE. As mentioned above, increased lipophilicity of IgE was also found in patients with atopic dermatitis [21], and this disease is known to be associated with IgE autoantibodies against more than 140 autoantigens [41]. Other studies found a tendency for lipophilic immunoglobulin heavy chain complementary-determining regions 3 loops to cause autoreactivity [12, 42, 43]. As the specificity of IgE in patients allergic to grass pollen is mainly determined by the heavy chains [34, 44], the autoreactivity might be due to a preferred heavy chain that is lipophilic. A similar phenomenon was observed for anti-nuclear antibodies as an example of an autoantibody. Although they can derive from almost every heavy chain variable domain gene family, most of them utilize one out of just four different preferred heavy chain variable domain families [45].

In conclusion, in this study we have shown that, unlike in healthy individuals, the majority of IgE in CSU patients is autoallergic IgE and that this IgE recognises a different spectrum of autoantigens than that of IgE from healthy individuals. Furthermore, we have shown that the autoallergic IgE of CSU patients is more lipophilic than that of healthy individuals. We believe that this last finding in particular will pave the way for the development of new diagnostic tests and therapies that will increase the effectiveness of management of CSU.

We acknowledge support from the German Research Foundation (DFG) and the Open Access Publication Fund of Charité - Universitätsmedizin Berlin. We also thank the Mast Cell-driven Diseases and their Differential Diagnoses (MAD3) team of the Dermatological Allergy (DEAL) group at Charité for help and support. This project was funded by departmental funds.