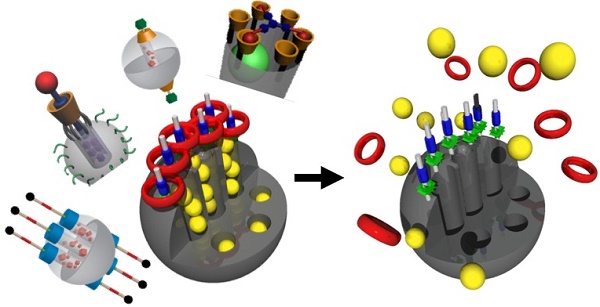 Major objectives in nanomedicine and nanotherapy include the ability to trap therapeutic molecules inside of nano-carriers, carry therapeutics to the site of the disease with no leakage, release high local concentrations of drug, release only on demand - either autonomous or external, and kill the cancer cells or an infectious organism. This review will focus on mesoporous silica nanoparticle carriers (MSN) with a large internal pore volume suitable for carrying anticancer and antibiotic drugs, and supramolecular components that function as caps that can both trap and release the drugs on-command.

Caps that are especially relevant to this review are rotaxanes and pseudorotaxanes that consist of a long chain-like molecule threaded through a cyclic molecule. Under certain conditions discussed throughout this review, the cyclic molecule can be attracted to one end of the rotaxane and in the presence of a stimulus can slide to the other end. When the thread is attached near the pore opening on MSNs, the sliding cyclic molecule can block the pore when it is near the particle or open it when it slides away.

The design, synthesis and operation of supramolecular systems that act as stimuli-responsive pore capping devices that trap and release molecules for therapeutic or imaging applications are discussed. Uncapping can either be irreversible because the cap comes off, or reversible when the cyclic molecule is prevented from sliding off by a steric barrier. In the latter case the amount of cargo released (the dose) can be controlled. These nanomachines act as valves.

Examples of supramolecular systems stimulated by chemical signals (pH, redox, enzymes, antibodies) or by external physical signals (light, heat, magnetism, ultrasound) are presented. Many of the systems have been studied in vitro proving that they are taken up by cancer cells and release drugs and kill the cells when stimulated. Some have been studied in mouse models; after IV injection they shrink tumors or kill intracellular pathogens after stimulation. Supramolecular constructs offer fascinating, highly controllable and biologically compatible platforms for drug delivery.