Conclusions: Our results thus indicate that [68Ga]Ga-Pentixafor-PET is feasible for the assessment of MALT lymphomas, with a good tumor-to-background ratio in terms of radiotracer uptake.

The staging or localization of extra-nodal, marginal zone, B-cell lymphoma of the mucosa-associated lymphoid tissue (MALT) lymphoma is an imaging challenge. Generally, computed tomography of the chest, abdomen, and pelvis, in combination with physical examination, is recommended, but this is a strategy that suffers from limited diagnostic accuracy [1]. MALT lymphomas frequently do not present with an elevated glycolysis, which hampers the use of 2-deoxy-2-[18F]fluoro-D-glucose-positron emission tomography ([18F]FDG-PET) [2]. Most MALT lymphomas, which can arise in almost every part of the body, lack specific symptoms; gastric MALT lymphomas display only nonspecific upper abdominal / gastrointestinal symptoms, and thus, incidental diagnosis is often based on endoscopic biopsies [1, 3]. As up to 25% of all gastric and 46% of all extra-gastric MALT lymphomas present with multi-organ involvement, and the presence of localized versus multi-organ involvement crucially influences treatment, a reliable method for whole-body staging is required [1, 3, 4]. Magnetic resonance imaging (MRI), especially with diffusion-weighted imaging, has emerged as a promising imaging tool [2]. However, the value of whole-body MRI for diagnosis and staging has yet to be evaluated and has not been recommended in the guidelines as yet [1, 3, 5].

Recently, non-invasive quantification and imaging of C-X-C chemokine receptor type 4 (CXCR4) has emerged for hematological malignancies [6]. CXCR4 is expressed in a variety of blood cells; its activation with stroma-derived factor 1 (SDF-1) activates the MAP kinase and PI3 kinase pathway [7]. CXCR4 is overexpressed in many types of solid cancers and is associated with proliferation, metastasis, and angiogenesis, which results in a poor prognosis [8]. High levels of CXCR4 expression have also been reported in hematopoietic malignancies, such as mantle cell lymphoma and MALT lymphoma, [9] and have also been correlated with a poor prognosis [10]. Consequently, drugs that act as antagonists on CXCR4 have been evaluated as new therapeutic tools [11, 12]. [68Ga]Ga-Pentixafor is a radiopharmaceutical for PET that binds with high specificity, selectivity, and has excellent clearance characteristics [13]. All of which make non-invasive [68Ga]Ga-Pentixafor-PET a promising diagnostic tool for malignancies associated with CXCR4 overexpression.

In the present study, it was our aim to evaluate [68Ga]Ga-Pentixafor-PET/MRI for the assessment of MALT lymphomas.

Thirty-six MALT lymphoma patients (median age, 62; range, 35-87 years; 19 female), who had not undergone previous systemic or radiation therapy, were included. MALT lymphomas were located in the orbit (n=14), the stomach (n=10), the lungs (n=5), or other sites (n=7; soft-tissues n=3; adrenal gland, tonsils, parotid gland, and urinary bladder; n=1, respectively) (Table 1). All but three patients demonstrated MALT lymphoma with markedly increased [68Ga]Ga-Pentixafor uptake, as quantified by standardized uptake values (mean SUVmax, 8.6; range, 3.1 to 24.4). The three PET-negative patients showed MALT lymphoma of the orbit— in these cases, the initial diagnosis was made by surgical resection, prior to the PET/MRI examination. Since, in these cases, neither diffusion-weighted imaging (DWI) nor follow-up sonography revealed residual MALT lymphoma, [68Ga]Ga-Pentixafor-PET was rated as true-negative. No additional lesions that were rated as negative in the PET/MRI were detected in other investigations.

A patient with biopsy-proven MALT lymphoma of the left adrenal gland. The adrenal MALT lymphoma shows high [68Ga]Ga-Pentixafor uptake (A, SUVmax 25.4), and is also well-visualized on the DWI b800 image (B, red arrow, C, fused PET/MRI). In addition, an area of increased uptake on PET is visible in the left orbit (E, yellow arrow), which was initially missed on MRI, but, in retrospect, showed restricted diffusion on the ADC map upon consensus reading (D, yellow arrow); this orbital lesion also proved to be MALT lymphoma at histology. 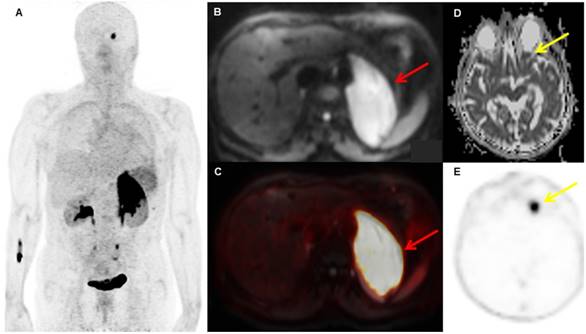 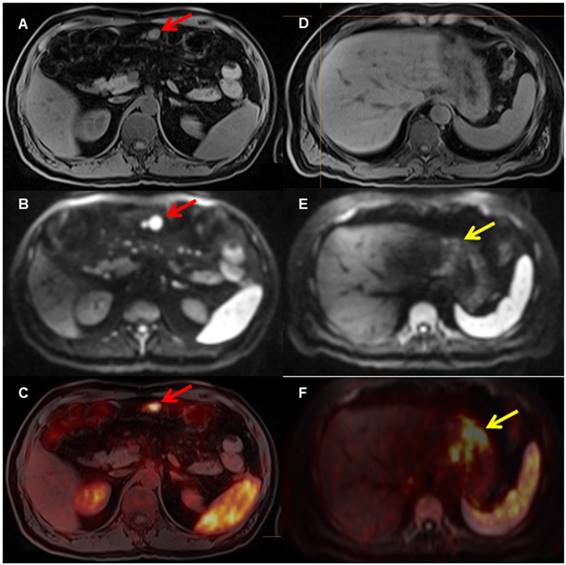 A 63-year-old patient with MALT lymphoma in the upper lobe / apex of the right lung and adjacent pleura. The lymphoma presents as a large consolidation with strong diffusion restriction (high signal on the DWI image (C) and low signal on the corresponding ADC map (D)). On PET, the lymphoma shows only a moderate uptake of [18F]FDG (A), indicating moderately increased glucose metabolism, but a strong uptake of [68Ga]Ga-Pentixafor, suggesting a high CXCR4 expression (B). 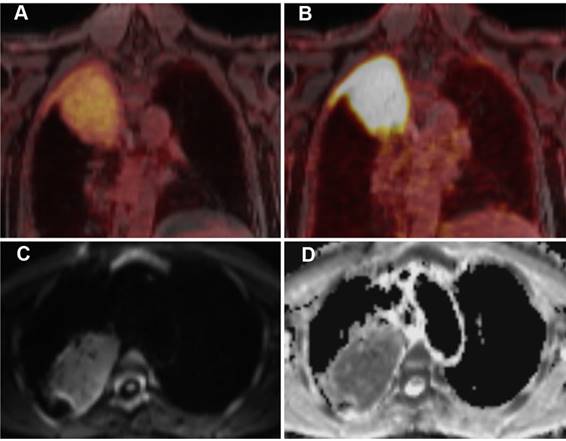 Overview of the uptake values and volumes of MALT lymphoma in all patients. In addition, the respective data is given with regard to the organ involved by the MALT lymphoma.

The diagnostic value of [68Ga]Ga-Pentixafor-PET/MRI is underlined by the fact that it revealed previously unknown, additional lymphoma manifestations in 17% of patients, compared to MRI, which may affect staging and may have therapeutic implications. Nevertheless, the increased expression of CXCR4 in uninvolved (i.e., non-lymphomatous) cervical lymph nodes has to be considered, which was most probably due to inflammatory changes; after all, it has been shown that CXCR4 is expressed on T and B lymphocytes, macrophages, monocytes, neutrophils, and eosinophils [14, 15]. A possible limitation for future applications might be the current shortage of available approved generators and rather complex logistics with the need for a separate synthesis for almost every patient.

Notably, [68Ga]Ga-Pentixafor might, in the future, gain relevance as a companion diagnostic compound. CXCR4 antagonists are currently being tested in early-phase studies, e.g., in acute myeloid leukemia [16]. As a companion diagnostic tool, [68Ga]Ga-Pentixafor-PET could reveal the uniform expression of CXCR4 in all lymphoma manifestations in terms of enhanced patient selection. An initial study reported the use of a therapeutic analogue of Pentixafor, Pentixather, labeled with β-emitting Lutetium-177, a commonly used therapeutic radionuclide [17]. Future studies will evaluate whether this therapeutic approach could also be useful in patients with MALT lymphoma.

In conclusion, this first study confirmed the effective value of [68Ga]Ga-Pentixafor PET/MRI in the assessment of MALT lymphoma, with an excellent tumor-to-background contrast.

Two senior, board-certified readers (one radiologist and one nuclear medicine physician) evaluated, in consensus, the co-registered PET and MRI using a Syngo workstation (Siemens, Erlangen, Germany) and a Hermes Hybrid Viewer (Hermes Medical solutions, Stockholm, Sweden) to draw semi-automated volumes of interest (VOI) using an SUV threshold of 2.5. The obtained volume was defined as the metabolic tumor volume. On PET, nodal and extranodal regions were rated as positive for lymphoma when there was at least one focal (or, for bone marrow, diffuse) area of increased tracer accumulation, relative to the surrounding tissue or mediastinal blood pool activity. For MRI (with DWI), we used previously published criteria for extranodal and nodal (>1.5 cm) lymphoma manifestations [2]. In case of PET/MRI findings not previously confirmed by endoscopy and biopsy, additional biopsies and histological verifications had to be performed to achieve a reliable reference standard. Independent-sample t-tests were used for group comparisons (significance level, P<0.05).

No funding was received for this study. We would like to thank the staff of the PET/MRI for their help in conducting this study. We thank Prof. Amelie Lupp from the Institute of Pharmacology and Toxicology, Jena University Hospital, for providing us with CXCR4 immunostaining.

10. Durig J, U Schmucker U Duhrsen. Differential expression of chemokine receptors in B cell malignancies. Leukemia. 2001;15:752-6