Up-regulation of PCOLCE by TWIST1 promotes metastasis in Osteosarcoma 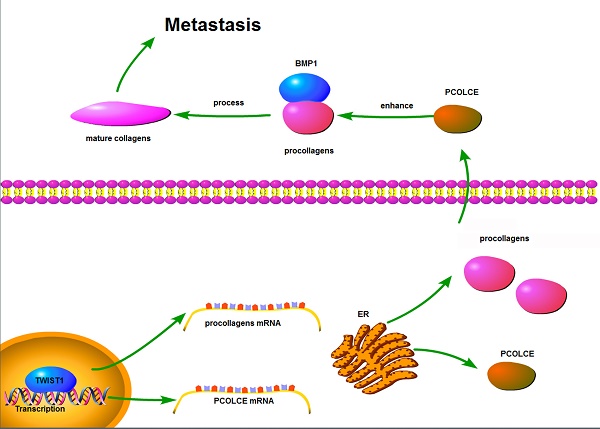 Procollagen C-proteinase enhancer protein (PCOLCE) was originally identified as an enhancer to facilitate the catalysis of procollagens by BMP1. PCOLCE participates in the reconstitution of extracellular and corneal repair. The elevation of PCOLCE in blood indicates that breast cancer has metastasized into the bones. However, direct research on PCOLCE has not been reported.

Methods: ECM candidates were identified by RNA-seq analysis from 4 normal and 16 osteosarcoma tissues. The in vitro migration and invasion abilities of osteosarcoma cells were determined by a Transwell assay. A spontaneous metastatic osteosarcoma model was established to assess osteosarcoma metastasis in vivo. The N-linked glycosylated amino acids were identified by PNGase F treatment combined with Western blotting. The mechanism of TWIST1 regulating PCOLCE transcription was elucidated by luciferase, qPCR and ChIP assays.

Results: PCOLCE was markedly up-regulated in human osteosarcoma tissues compared to its expression in noncancerous adjacent tissues; high PCOLCE expression in tissues correlated with a poor patient prognosis, and the knockdown of PCOLCE by shRNAs impaired the migration, invasion and lung metastasis of osteosarcoma cells. The overexpression of wild-type PCOLCE, but not its N29Q mutant, promoted migration, invasion and metastasis, indicating that the glycosylation of PCOLCE at Asn29 is necessary for its functions in osteosarcoma. TWIST1, a key transcription factor in metastasis, was also overexpressed in osteosarcoma tissues and positively correlated with either PCOLCE or its potential procollagen substrates, such as COL1A1, COL1A2, COL5A1, COL8A2 and COL10A1.

Conclusion: Our findings are the first to provide evidence that PCOLCE plays a critical role in promoting the lung metastasis of osteosarcoma, and this up-regulation of PCOLCE by TWIST1 may lead to a new therapeutic strategy to treat patients with metastatic osteosarcoma.