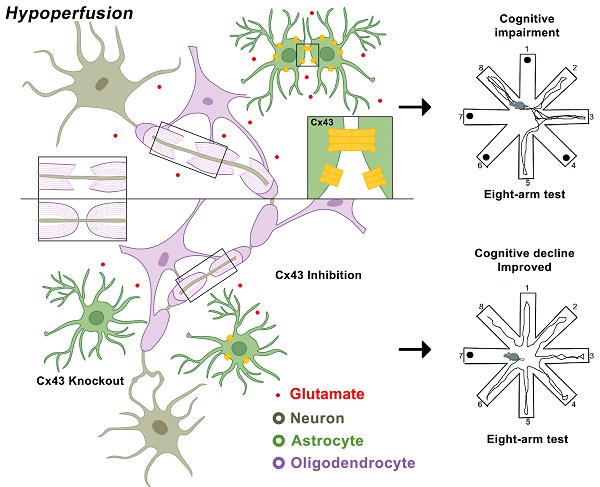 Rational: Myelin loss is a characteristic feature of both ischemic white matter disease and its associated vascular dementia, and is a hallmark of chronic cerebral hypoperfusion due to carotid artery stenosis. Yet the cellular mechanisms involved in ischemic dysmyelination are not well-understood, and no effective treatment has emerged to prevent or slow hypoperfusion-related demyelination. In a study employing the bilateral common carotid artery stenosis (BCAS) mouse model, we found reduced cerebral blood flow velocity and arteriolar pulsatility, and confirmed that prolonged BCAS provoked myelin disruption. These pathological features were associated with marked cognitive decline, in the absence of evident damage to axons.

Methods: To assess the role of astroglial communication in BCAS-associated demyelination, we investigated the effect of deleting or inhibiting connexin 43 (Cx43), a constituent of astroglial gap junctions and hemichannels.

Conclusion: These findings suggest that astrocytic Cx43 may be a viable target for attenuating the demyelination and cognitive decline associated with chronic cerebral hypoperfusion.