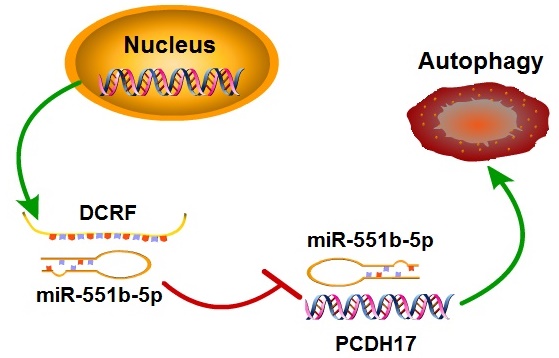 Background: We generated a rat model of diabetic cardiomyopathy (DCM) and reported significant upregulation of the long non-coding RNA DCRF. This study was designed to determine the molecular mechanisms of DCRF in the development of DCM.

Methods: Real-time PCR and RNA fluorescent in situ hybridization were conducted to detect the expression pattern of DCRF in cardiomyocytes. Histological and echocardiographic analyses were used to assess the effect of DCRF knockdown on cardiac structure and function in diabetic rats. mRFP-GFP-LC3 fluorescence microscopy, transmission electron microscopy, and Western blotting were carried out to determine cardiomyocyte autophagy. RNA immunoprecipitation and luciferase reporter assays were performed to elucidate the regulatory role of DCRF/miR-551b-5p/PCDH17 pathway in cardiomyocyte autophagy.

Conclusion: Our study suggests that DCRF can act as a competing endogenous RNA to increase PCDH17 expression by sponging miR-551b-5p, thus contributing to increased cardiomyocyte autophagy in DCM.

Long non-coding RNAs (lncRNAs) are defined as transcripts longer than 200 nucleotides without protein-coding potential. They can modulate gene expression by functioning as nuclear transcriptional regulators, RNA-binding protein sequestering agents, and microRNA (miRNA) sponges [3]. It has been documented that lncRNAs are critically involved in the pathogenesis of various cardiovascular diseases [4,5]. We generated a rat model of DCM and identified differentially expressed lncRNAs in the myocardium by sequencing analysis. The results indicated that TCONS_00069849 Chr2: 228036171-228036880 was significantly upregulated in DCM rats. This lncRNA was discovered to be associated with DCM and was therefore named DCM-related factor (DCRF). The present study was conducted to investigate the molecular mechanisms of DCRF in the development of DCM. Our findings suggested that DCRF could regulate cardiomyocyte autophagy by acting as a miRNA sponge.

All experiments in this study were approved by the Animal Ethics Committee of Soochow University. Male Sprague-Dawley rats weighing 200-250 g were received a single intraperitoneal injection of streptozotocin (65 mg/kg). The fasting blood glucose was measured one week after injection. Only rats with glucose levels higher than 16.7 mmol/L were defined as diabetic. The diabetic rats were intramyocardially injected with 100 μL adeno-associated virus-9 (AAV-9, 1×1010 GC/mL) containing DCRF-shRNA (DM + DCRF-shRNA) or scrambled-shRNA (DM + Scr-shRNA). Two other groups consisted of diabetic rats without AAV-9 injection (DM) and normal rats (Control). All animals were kept for 12 weeks under the same laboratory conditions.

The neonatal rats were anesthetized with isoflurane and the hearts were surgically removed and rinsed in cold saline. Cardiomyocytes were digested, centrifuged, suspended, and purified as previously described [6], then diluted to 1×106 cells/ml and cultured at 37°C in a humidified atmosphere of 5% CO2- 95% air. Cardiomyocytes were transfected with adenovirus containing DCRF-siRNA or scrambled-siRNA and exposed to high glucose (30 mmol/L). The sequences of DCRF-siRNA and scrambled-siRNA were 5'-GAGAGAAGUUGGGUGAUUAUC-3' and 5'-UUCUCCGAACGUGUCACGU-3'.

Myocardial tissue was fixed in 10% buffered formalin, embedded in paraffin and sliced into 5-μm-thick sections. Subsequently, hematoxylin and eosin (HE) and Masson's trichrome were used to stain myocardial sections and the slides were observed under an optical microscope. Myocyte cross-sectional area (CSA) and collagen volume fraction (CVF) were measured with image analysis software (Image-Pro Plus, Media Cybernetics).

Cardiac tissue was fixed with 2.5% glutaraldehyde, post-fixed with 2% osmium tetroxide, dehydrated in graded ethanol, and embedded in epoxy resin. Subsequently, the ultrathin sections were prepared and stained with uranyl acetate and lead citrate. The samples were observed under a transmission electron microscope (Hitachi HT7700, Japan).

The 3'-untranslated region (UTR) of PCDH17 was cloned downstream of luciferase gene to generate a Luc-PCDH17-Wt vector, while the 3'-UTR without binding site of miR-551b-5p was constructed to generate the Luc-PCDH17-Mut vector. HEK293 cells were seeded into 96-well plates and transfected with Luc-PCDH17 vectors and miRNA mimics. The luciferase activity was then detected using a Luciferase Reporter Assay System (Promega, USA).

The RIP assay was performed using a Magna RIP™ RNA-Binding Protein Immunoprecipitation Kit (Millipore, USA). Myocardial cells were incubated with RIP buffer containing magnetic beads conjugated with AGO2 antibody or negative control IgG, and then were lysed in RIP lysis buffer. The immunoprecipitated RNAs were purified followed by quantitative PCR to determine the target sequences.

Total RNAs were extracted using TRIzol reagent (Invitrogen, USA). The cytoplasmic and nuclear fractions were prepared using the NE-PER extraction kit (Pierce, USA). To quantify the amount of lncRNA, miRNA, and mRNA, real-time PCR was performed with the SYBR Premix Ex Taq™ kit (TaKaRa, Japan). GAPDH and U6 were used as internal controls in this study. The relative expression of genes was calculated using the 2-ΔΔCT method. The sequences of primers used in this study were as follows:

Cardiomyocytes were lysed with RIPA buffer (Thermo Scientific, USA). Cell lysates containing 20 μg of protein were separated by SDS-PAGE, transferred to PVDF membranes, and blocked with 5% non-fat milk. The membranes were incubated with primary antibodies at 4 °C overnight, followed by secondary antibodies conjugated with horseradish peroxidase for 1 h at room temperature. All of the antibodies were obtained from Cell Signaling Technology and used at the recommended dilutions following the manufacturer's protocols. The immunoblots were visualized using the enhanced chemiluminescence reagent (Thermo Scientific, USA).

All statistical analyses were conducted using SPSS 20.0 (IBM, USA). The experimental data were expressed as mean ± SD. The differences between groups were compared using one-way ANOVA. The Scheffé post hoc test was used to perform multiple comparisons. A value of p < 0.05 was considered statistically significant.

DCRF is located on Chr2: 228036171-228036880 in the rat genome assembly Rnor_6.0 and its sequence is shown in Table 1. Real-time PCR and the FISH assay indicated that DCRF was primarily expressed in the cytoplasm of cardiomyocytes (Figure 1A and B). Also, DCRF expression was upregulated in the myocardium of diabetic rats and in cardiomyocytes treated with high glucose (Figure 1C and D).

Myocardial tissue was stained with HE and Masson's trichrome, and CSA and CVF were measured. HE staining showed the typical histological changes in diabetic myocardium, including cardiomyocyte hypertrophy, myocardial fiber rupture, and increased cell gap, whereas DCRF knockdown was associated with fewer histological abnormalities (Figure 2A). Also, Masson staining indicated that reduced expression of DCRF could attenuate myocardial fibrosis in diabetic rats (Figure 2B). Furthermore, CSA and CVF were markedly increased in the DM group and decreased in the DM + DCRF-shRNA group (Figure 2C and D).

Transthoracic echocardiography was used to evaluate the effect of DCRF knockdown on cardiac structure and function. As shown in Figure 3A, DCRF expression was upregulated in the diabetic myocardium and downregulated after DCRF-shRNA transfection. Echocardiographic measurements indicated that LVESD and LVEDD were increased in the DM group and reduced in the DM + DCRF-shRNA group (Figure 3B and C). 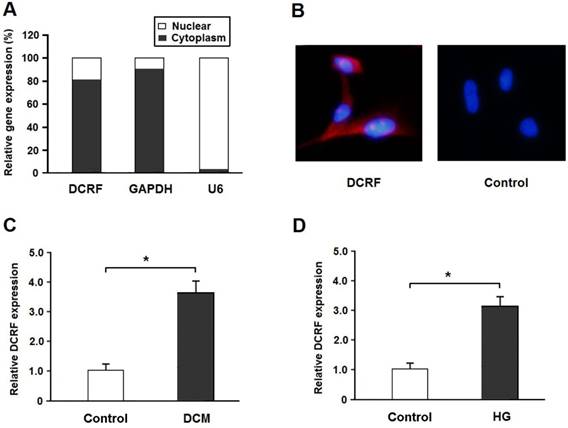 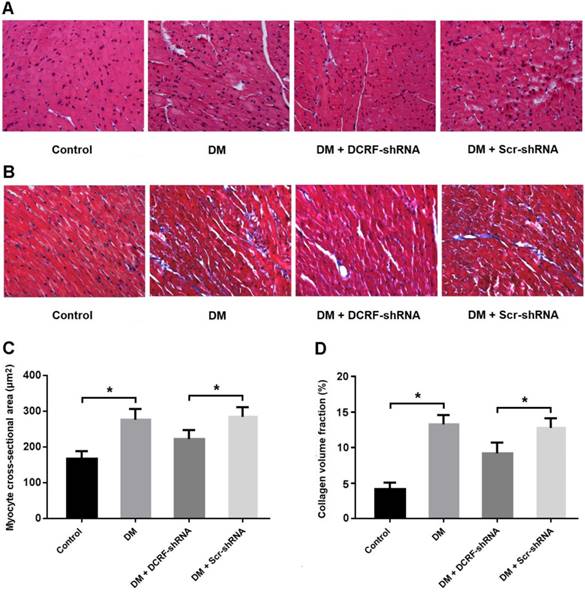 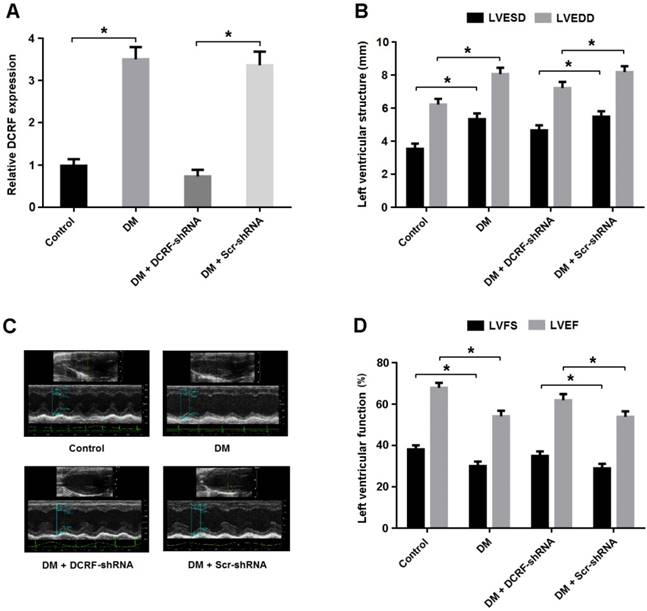 DCRF is involved in the modulation of cardiomyocyte autophagy

Cardiomyocyte autophagy was detected by transmission electron microscopy and mRFP-GFP-LC3 fluorescence microscopy. As shown in Figure 4A, autophagy was elevated in the diabetic myocardium, while DCRF knockdown significantly reduced the number of autophagosomes. Moreover, high glucose treatment was associated with increased autophagy in cardiomyocytes, whereas DCRF-siRNA transfection could attenuate high glucose-induced autophagy (Figure 4B).

DCRF was primarily expressed in the cytoplasm of cardiomyocytes. Thus, we speculated that DCRF might regulate gene expression by functioning as a miRNA sponge. The AGO2 protein is a core component of the RNA-induced silencing complex. The RIP assay showed that DCRF and miR-551b-5p were especially abundant in the immuno-precipitate pulled down by anti-AGO2 but not anti-IgG (Figure 5D).

DCRF is involved in the modulation of cardiomyocyte autophagy. (A) Diabetic rats were intramyocardially injected with adeno-associated virus containing DCRF-shRNA or scrambled-shRNA. After 12 weeks, transmission electron microscopy was used to detect autophagosomes in the myocardium. (B) Myocardial cells were transfected with adenovirus containing DCRF-siRNA or scrambled-siRNA and then exposed to high glucose (HG, 30 mmol/L). After 48 hours, tandem mRFP-GFP-LC3 fluorescence microscopy was performed to evaluate cardiomyocyte autophagy. 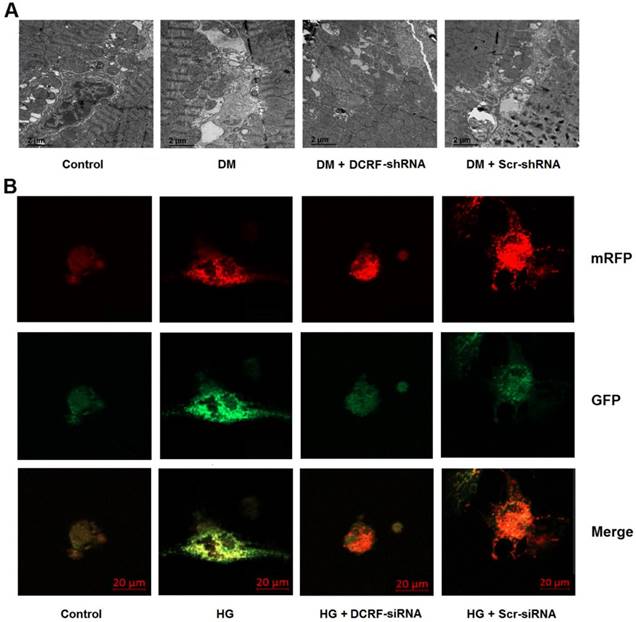 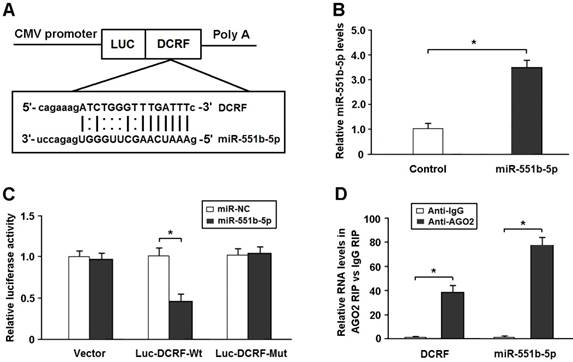 PCDH17 is a direct target of miR-551b-5p in cardiomyocytes

To determine whether DCRF competitively inhibits the binding of miR-551b-5p to PCDH17, we carried out luciferase reporter assay in HEK293 cells. The results revealed that DCRF could counteract the inhibitory effect of miR-551b-5p on PCDH17 (Figure 6E), which suggested that DCRF might function as a competing endogenous RNA (ceRNA) to control PCDH17 expression by sponging miR-551b-5p. 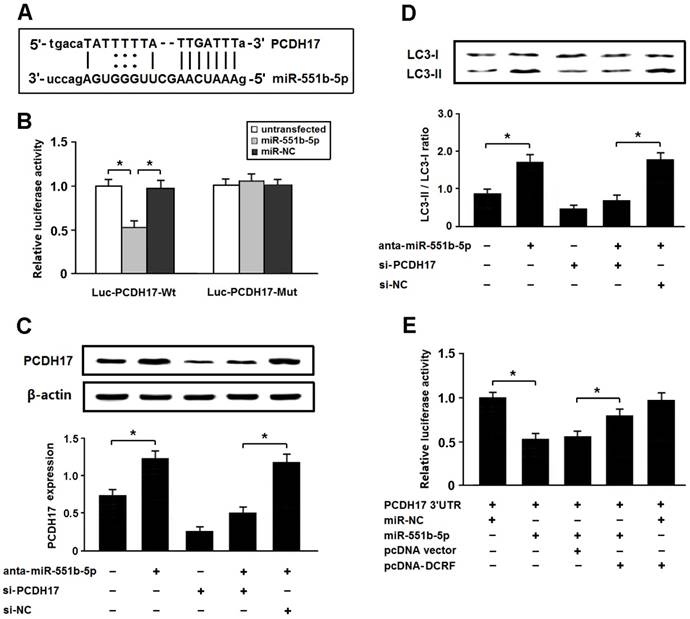 High glucose promotes autophagy by regulating the DCRF/PCDH17 axis. (A, B) Myocardial cells were transfected with adenovirus containing DCRF-siRNA or PCDH17 and then exposed to high glucose (30 mmol/L) for 48 hours. The expression of PCDH17 was analyzed by real-time PCR and Western blotting (n = 3, *P < 0.05). (C) Cardiomyocyte autophagy was assessed by detection of LC3 expression (n = 3, *P < 0.05). 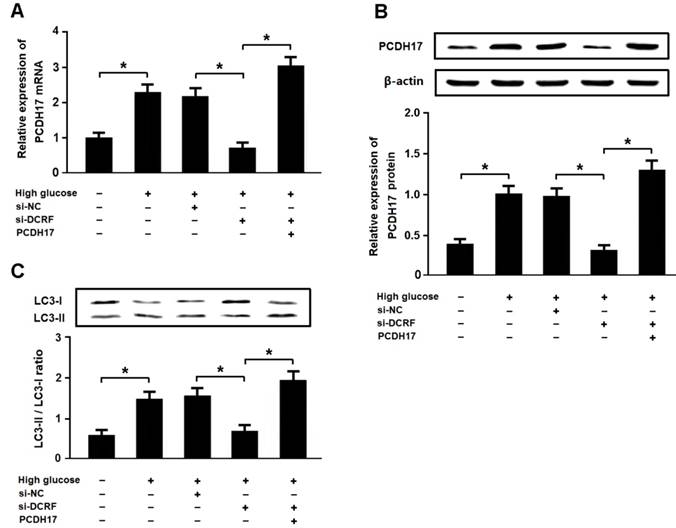 Emerging evidence has demonstrated that lncRNAs participate in the molecular mechanisms of multiple cardiovascular diseases [5]. However, it remains unclear what is the function of lncRNAs in the pathogenesis of DCM. The present study was aimed to determine the pathological role of DCRF in the development of DCM. Our findings indicated that the expression of DCRF was increased in diabetic myocardium, while DCRF knockdown could reduce cardiomyocyte autophagy and improve cardiac function in DCM rats. We then further investigated the potential mechanisms of DCRF involved in high glucose-induced autophagy. Our results suggested that DCRF could act as a ceRNA to increase PCDH17 expression by sponging miR-551b-5p, thus contributing to increased cardiomyocyte autophagy and the progression of DCM.

In previous studies, we investigated the pathogenesis of lncRNAs in DCM and discovered that H19, MIAT, and MALAT1 participated in the regulation of cardiomyocyte apoptosis [6-8]. In this study, we performed RNA sequencing to determine differentially expressed lncRNAs in DCM rats. Among them, we focused on DCRF, which was associated with autophagy activation. Our results demonstrated that high glucose could promote cardiomyocyte autophagy by regulating the DCRF/miR-551b-5p/PCDH17 axis, which appears to be involved in the pathogenesis of DCM.

The ceRNA theory has been proposed as a novel regulatory mechanism, which modulates the expression of target genes through miRNA competition [9]. In this study, our results suggested that DCRF could bind to miR-551b-5p and serve as a ceRNA to upregulate PCDH17 expression, thereby leading to increased autophagy in cardiomyocytes. This observation may provide valuable insight into the molecular mechanisms of DCM.

It is well recognized that autophagy plays a crucial role in the pathogenesis of DCM [10,11]. Autophagy is an intracellular lysosomal degradation process responsible for the clearance of unnecessary proteins and damaged organelles to maintain cellular homeostasis. However, increased autophagy contributes to cardiac damage and dysfunction due to autophagic cell death [12]. In this study, we found that DCRF could induce cardiomyocyte autophagy by upregulating PCDH17 expression in DCM. PCDH17, which belongs to the protocadherin gene family, has been shown to be associated with the activation of autophagy in cancer cells [13,14]. Our results revealed that high glucose could increase DCRF expression, which promotes the binding of miR-551b-5p to DCRF, thus reducing the repression of PCDH17. The ceRNA regulatory network, DCRF/miR-551b-5p/PCDH17, may provide a potential therapeutic strategy for DCM.

In conclusion, our study has shown increased expression of DCRF in diabetic myocardium. By functioning as a ceRNA, DCRF can upregulate PCDH17 through sponging miR-551b-5p and consequently activate cardiomyocyte autophagy, thus contributing to the progression of DCM.