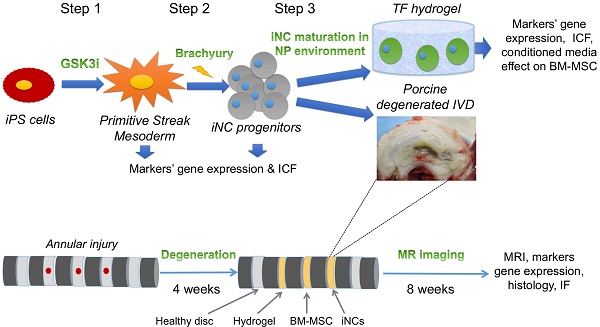 Introduction: As many as 80% of the adult population experience back pain at some point in their lifetimes. Previous studies have indicated a link between back pain and intervertebral disc (IVD) degeneration. Despite decades of research, there is an urgent need for robust stem cell therapy targeting underlying causes rather than symptoms. It has been proposed that notochordal cells (NCs) appear to be the ideal cell type to regenerate the IVD: these cells disappear in humans as they mature, are replaced by nucleus pulposus (NP) cells, and their disappearance correlates with the initiation of degeneration of the disc. Human NCs are in short supply, thus here aimed for generation of notochordal-like cells from induced pluripotent cells (iPSCs).

Methods: Human iPSCs were generated from normal dermal fibroblasts by transfecting plasmids encoding for six factors: OCT4, SOX2, KLF4, L-MYC, LIN28, and p53 shRNA. Then the iPSCs were treated with GSK3i to induce differentiation towards Primitive Streak Mesoderm (PSM). The differentiation was confirmed by qRT-PCR and immunofluorescence. PSM cells were transfected with Brachyury (Br)-encoding plasmid and the cells were encapsulated in Tetronic-tetraacrylate-fibrinogen (TF) hydrogel that mimics the NP environment (G'=1kPa), cultured in hypoxic conditions (2% O2) and with specifically defined growth media. The cells were also tested in vivo in a large animal model. IVD degeneration was induced after an annular puncture in pigs, 4 weeks later the cells were injected and IVDs were analyzed at 12 weeks after the injury using MRI, gene expression analysis and histology.

Results: After short-term exposure of iPSCs to GSK3i there was a significant change in cell morphology, Primitive Streak Mesoderm (PSM) markers (Brachyury, MIXL1, FOXF1) were upregulated and markers of pluripotency (Nanog, Oct4, Sox2) were downregulated, both compared to the control group. PSM cells nucleofected with Br (PSM-Br) cultured in TF hydrogels retained the NC phenotype consistently for up to 8 weeks, as seen in the gene expression analysis. PSM-Br cells were co-cultured with bone marrow (BM)-derived mesenchymal stem cells (MSCs) which, with time, expressed the NC markers in higher levels, however the levels of expression in BM-MSCs alone did not change. Higher expression of NC and NP marker genes in human BM-MSCs was found to be induced by iNC-condition media (iNC-CM) than porcine NC-CM. The annular puncture induced IVD degeneration as early as 2 weeks after the procedure. The injected iNCs were detected in the degenerated discs after 8 weeks in vivo. The iNC-treated discs were found protected from degeneration. This was evident in histological analysis and changes in the pH levels, indicative of degeneration state of the discs, observed using qCEST MRI. Immunofluorescence stains show that their phenotype was consistent with the in vitro study, namely they still expressed the notochordal markers Keratin 18, Keratin 19, Noto and Brachyury.

Conclusion: In the present study, we report a stepwise differentiation method to generate notochordal cells from human iPSCs. These cells not only demonstrate a sustainable notochordal cell phenotype in vitro and in vivo, but also show the functionality of notochordal cells and have protective effect in case of induced disc degeneration and prevent the change in the pH level of the injected IVDs. The mechanism of this effect could be suggested via the paracrine effect on resident cells, as it was shown in the in vitro studies with MSCs.