Interleukin-22 acts as a mitochondrial protector

Interleukin (IL)-22 has been increasingly recognized as a promising therapeutic option for various types of diseases. This commentary summarizes the novel mechanistic aspects of IL-22 for the treatment of liver diseases including the study by Chen et al. published in the recent issue of the Theranostics that elucidated the novel function of IL-22 as a mitochondrial protector for the adaptive defense against liver injury.

Interleukin (IL)-22 is a member of the IL-10 family of cytokines and produced by various types of lymphocytes such as Th17, Th22, and type 3 innate lymphoid cells (ILC3s) [1]. IL-22 functions by interacting with a heterodimeric receptor complex that consists of IL-10R2 and IL-22R1. Unlike the ubiquitous expression of IL-10R2, the expression of IL-22R1 is restricted mainly to epithelial cells, but not on cells of hematopoietic origin [2], which makes IL-22 unique as it is produced by immune cells but acts on non-immune cells. IL-22 has been known to play a protective role against epithelial injury in various organs such as liver, pancreas, gut, kidney, and lung by governing cell survival, regenerative, and anti-microbial capacity [3, 4].

In the liver, IL-22 plays diverse roles by acting on various types of cells such as hepatocytes, liver progenitor cells, and hepatic stellate cells [5-7]. It has been reported that IL-22 protects against different types of liver injury such as T-cell mediated liver injury, chemical/drug-induced liver injury, and alcoholic liver injury, mainly by activating the signal transducers and activators of transcription 3 (STAT3) signaling pathway in hepatocytes that induces anti-apoptotic and antioxidant genes [8-13]. In addition to the prevention of hepatocyte death, IL-22 also promotes liver regeneration, induction of antimicrobial genes (e.g., lipocalin 2), and suppression of lipogenic genes [9, 12, 14, 15], which may contribute to hepatoprotection, anti-infection, and metabolic regulation by IL-22. IL-22 receptor complex is also present on hepatic stellate cells, where IL-22 promotes p53/p21-dependent senescence of activated hepatic stellate cells and resolution of liver fibrosis via STAT3 activation [6]. Additionally, IL-22 promotes the growth of liver progenitor cells [16], which may assist the liver to repair after chronic liver injury.

In contrast to the benefits mentioned above, IL-22 also plays a pathogenic role in a context-dependent manner [17, 18]. IL-22 is elevated in patients with chronic liver diseases such as viral hepatitis and advanced liver fibrosis [5, 19]. In experimental models of hepatitis B virus (HBV) infection, IL-22 has been reported to promote inflammation and fibrosis [5, 20, 21]. IL-22 has been also demonstrated to promote inflammatory conditions in other organs such as skin and gut and fibrosis in the intestine [22-25]. This nature of IL-22 has highlighted the therapies blocking IL-22 and its upstream inducer IL-23 for the treatment of psoriasis and inflammatory bowel disease [26]. The dual nature of IL-22 is thought to be at least in part due to the presence of IL-22 binding protein (IL-22BP or IL-22Ra2), which is a soluble IL-22 receptor and an endogenous inhibitor of IL-22 [27, 28]. Also, it has been postulated that the function of IL-22 may be dependent on the nature of the inflammation. IL-22 may play a protective role in acute settings of inflammation by amplifying tissue repair, whereas it plays a detrimental role in chronic inflammation with a possibility to induce hyperplasia [18].

Novel perspectives on the tissue-protective role of IL-22 have been increasingly reported in the past three years. In particular, two studies published in the 2018 issues of the Theranostics demonstrated interesting mechanisms underlying the beneficial effect of IL-22 in the liver and the heart. First, Mo et al. identified autophagy activation as a critical mediator in IL-22's protection against acetaminophen-induced liver injury [29]. Acetaminophen overdose is the leading cause of drug-induced liver injury and has been widely used to experimentally study acute liver failure. Under this condition, mitochondria-derived reactive oxygen species (ROS) leads to loss of the mitochondrial membrane potential and release of intermembrane proteins which migrate to the nucleus and stimulate nuclear DNA fragmentation. IL-22 facilitates the removal of the damaged mitochondria through AMPK activation and subsequent autophagy induction, thereby alleviating acetaminophen-induced liver injury. Also, Tang et al. reported that the action of IL-22 in hepatocytes exerts cardioprotective effect in the mouse model of myocardial infarction [30]. The authors demonstrated that IL-22 treatment attenuated cardiac injury and inflammation occurring after myocardial infarction. Mechanistically, the cardioprotective effect of IL-22 was dependent on STAT3 activation and production of FGF21 in hepatocytes, which controls the expression of genes responsible for cardiomyocyte survival. This emphasizes the important role of IL-22 in the communication between the liver and the heart for an adaptive protection against cardiac injury.

Mitochondria have been increasingly highlighted as the target for the protective action of IL-22 against tissue injury [33, 34]. Mitochondria play a critical role in hepatic metabolism such as maintenance of lipid and glucose homeostasis [35]. The metabolic regulation by hepatic mitochondria is largely dysregulated in the disease state. For example, insulin resistance alters respiration and ATP production in mitochondria which leads to aberrant ROS production [35, 36]. Also, hepatic lipid metabolism such as mitochondrial fatty acid β-oxidation and de novo fatty acid synthesis are impaired under the pathological conditions [35, 36]. In the recent issue of the Theranostics, Chen et al. identified IL-22 as a mitochondrial protector to control metabolic reprogramming and the maintenance of mitochondrial fitness as the novel mechanism by which IL-22 adaptively protects against liver injury [37]. This previously unrecognized function of IL-22 was demonstrated by the measurement of the oxidative phosphorylation and glycolysis in damaged mouse hepatocytes. IL-22 was able to restore oxidative phosphorylation and glycolysis that were suppressed by hepatocyte damage caused by various stimuli such as CCl4, palmitic acid, cisplatin, and ethanol. Improvement in mitochondrial function reversed the expression of the genes involved in metabolic reprogramming such as Hk2 and Hif1a, which were suppressed by hepatocyte damage. Mechanistically, the IL-22/STAT3 pathway induced lncRNA H19 which activates AMP-activated protein kinase (AMPK). Activation of AMPK mediated IL-22-dependent restoring of mitochondrial integrity and ROS reduction through AKT and mTOR activation, which is also responsible for transactivation of genes involved in glycolysis and metabolic reprogramming. Lastly, the in vivo relevance of IL-22-induced metabolic reprogramming was verified in mouse models of liver injury such as cisplatin treatment and high-fat diet (HFD) feeding.

While many studies have reported the protective effect of IL-22 against various types of liver injury, acute-on-chronic liver failure (ACLF) and nonalcoholic steatohepatitis (NASH) have been relatively unexplored in terms of the therapeutic potential of IL-22, partially due to the lack of appropriate animal models to study these diseases. Recently, we have developed novel models of ACLF and NASH in mice and assessed the therapeutic benefit of IL-22 in these models. For the new mouse ACLF model, mice were challenged by combination of chronic CCl4 administration with acute CCl4 challenge and bacterial infection [38]. In this model, liver regeneration was blocked through the inhibition of the pro-regenerative IL-6/STAT3 pathway but activation of the anti-regenerative interferon-γ/STAT1 pathway, which was similarly observed in ACLF patients. IL-22 treatment ameliorated ACLF by activating STAT3 pathway and inducing anti-bacterial genes via the STAT3/BCL2 pathway, which supports the feasibility of the development of IL-22 therapy for the treatment of ACLF.

We also established a new HFD+Cxcl1-induced NASH model based on the clinical observation that neutrophil infiltration is markedly increased, and neutrophil-recruiting chemokines (e.g., C-X-C motif ligand 1, CXCL1) are upregulated in the liver of NASH patients compared to fatty liver [39]. Hepatic overexpression of Cxcl1 in 3-month HFD-fed mice significantly increased neutrophil infiltration, which promoted neutrophil-derived oxidative stress, liver injury, inflammation, and fibrosis compared to mice fed an HFD only [40]. Interestingly, activation of p38 mitogen-activated protein kinase protects against HFD-induced steatosis but exacerbates HFD+Cxcl1-induced NASH in this HFD+Cxcl1 model [41]. Administration of IL-22 ameliorated the HFD+Cxcl1-induced NASH through activation of metallothionein-1 and -2, which are potent antioxidant enzymes under the transcriptional regulation of the IL-22/STAT3 pathway [40]. This finding from our study added NASH to the list of diseases potentially amenable to IL-22 therapy.

The half-life of IL-22 is less than 2 hours, which has hindered its development as a therapeutic option [42]. For this reason, companies such as Generon Corporation and Genentech have developed engineered IL-22 molecules to a dimer to extend its half-life for clinical application. The majority of the recent studies mentioned above utilized IL-22Fc, a recombinant fusion protein consisting of two human IL-22 molecules linked to an immunoglobulin constant region (IgG2-Fc) with a prolonged half-life (39 h-206 h) [42]. In two phase 1 clinical trials, IL-22Fc showed safety and well-tolerance with favorable pharmacokinetic properties [42, 43]. Also, in a phase 2a open-label study for alcoholic hepatitis, IL-22Fc ameliorated moderate and severe alcoholic hepatitis with an improvement in Lille and model for end-stage liver disease (MELD) scores accompanied by a decrease in inflammatory markers and increase in hepatic regeneration markers [44]. These promising results from the clinical studies corroborate the results from in vitro and in vivo studies that advocate the feasibility of IL-22 therapy for the treatment of liver diseases. 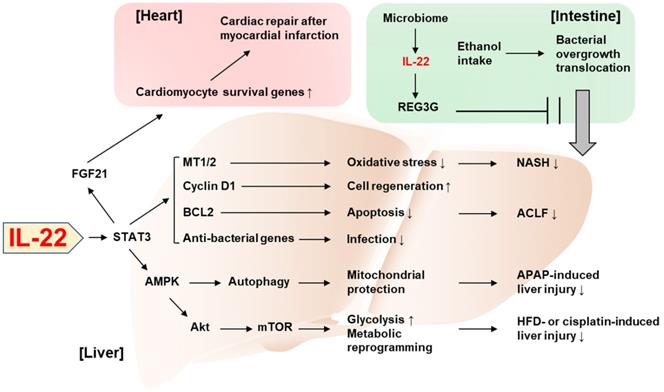 Despite continuing efforts to discover the pathogenic mechanisms and therapeutic targets, few medications have been approved for the treatment of liver diseases. As discussed in this article, accumulating literature has documented the basic biology of IL-22 and the molecular mechanisms by which IL-22 functions, and recent advances in the study of IL-22 have established its therapeutic efficacy in experimental models of liver diseases. Moreover, the recent development of engineered recombinant IL-22 protein has overcome the inherent difficulty of the therapeutic development of IL-22 and accelerated the clinically relevant discoveries supporting the introduction of IL-22 therapy. With promising results from phase I and phase II clinical trials, IL-22 has been now highlighted as a safe option for the treatment of multiple diseases including alcoholic hepatitis. Although concerns have been raised regarding the oncogenic ability of IL-22, animal studies have revealed that administration of IL-22 alone is hardly able to develop liver tumors spontaneously without preexisting oncogenic cues at least in short-term studies [12]. Overall, IL-22 has a great potential to be developed as the therapeutic agent for a multitude of liver diseases.

The work described from Dr. Bin Gao's lab was supported by the intramural program of NIAAA, NIH (B.G.).