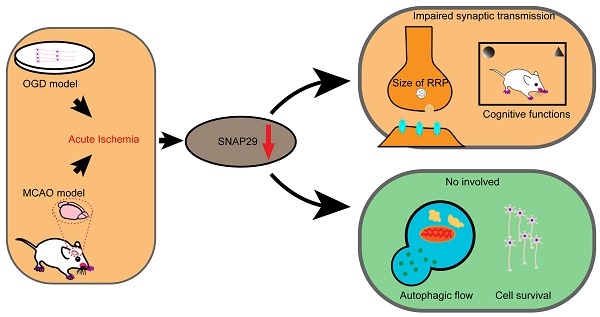 Methods: Oxygen-glucose deprivation (OGD) model and middle cerebral artery occlusion (MCAO) model were used to imitate in vitro or in vivo acute cerebral ischemia, respectively. The differentially expressed synaptosome associated protein 29 (SNAP29)-interacting proteins upon ischemia and reperfusion were analyzed with bioinformatics analysis and the results indicated that the changes of SNAP29 after acute ischemia were mainly involved in the synaptic functions. The outcomes of SNAP29 reduction were assessed with SNAP29 knockdown, which mimicked the distribution of SNAP29 along neuronal processes after acute ischemia. Using the whole-cell patch clamp recording method and transmission electron microscope, the pre-synaptic function and readily releasable pool (RRP) were observed after SNAP29 knock down. Using photogenetic manipulations and behavioral tests, the neuronal projection and cognitive functions of mice with SNAP29 knock down in hippocampus CA1 region were evaluated.

Results: It was found that SNAP29 protein levels decreased in both in vitro and in vivo ischemic models. Further, the SNAP29 reduction wasn't associated with impaired autophagy flux and neuronal survival. When SNAP29 was knocked down in primary cortical neurons, the frequency of AMPARs-mediated mEPSCs, but not the amplitude, significantly decreased. Meanwhile, the mice with SNAP29 knockdown at CA1 region of hippocampus developed an impairment in hippocampus-mPFC (middle prefrontal cortex) circuit and behavioral dysfunctions. Moreover, the size of RRP at presynaptic sites was diminished.

Conclusion: Since SNAP29 protein levels didn't significantly influence the neuronal survival and its decrease was sufficient to disturb the neural circuit via a presynaptic manner, the SNAP29-associated strategies may be an efficient target against poststroke synaptic dysfunction and cognitive deficits.