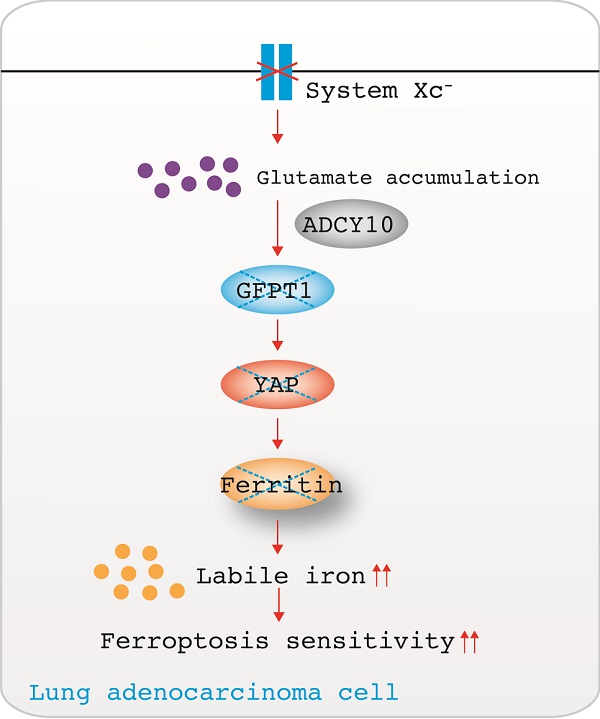 Rationale: Ferroptosis, a newly identified form of regulated cell death, can be induced following the inhibition of cystine-glutamate antiporter system XC- because of the impaired uptake of cystine. However, the outcome following the accumulation of endogenous glutamate in lung adenocarcinoma (LUAD) has not yet been determined. Yes-associated protein (YAP) is sustained by the hexosamine biosynthesis pathway (HBP)-dependent O-linked beta-N-acetylglucosaminylation (O-GlcNAcylation), and glutamine-fructose-6-phosphate transaminase (GFPT1), the rate-limiting enzyme of the HBP, can be phosphorylated and inhibited by adenylyl cyclase (ADCY)-mediated activation of protein kinase A (PKA). However, whether accumulated endogenous glutamate determines ferroptosis sensitivity by influencing the ADCY/PKA/HBP/YAP axis in LUAD cells is not understood.

Results: The accumulation of endogenous glutamate following system XC- inhibition has been shown to determine ferroptosis sensitivity by suppressing YAP in LUAD cells. YAP O-GlcNAcylation and expression cannot be sustained in LUAD cells upon impairment of GFPT1. Thus, Hippo pathway-like phosphorylation and ubiquitination of YAP are enhanced. ADCY10 acts as a key downstream target and diversifies the effects of glutamate on the PKA-dependent suppression of GFPT1. We also discovered that the protumorigenic and proferroptotic effects of ADCY10 are mediated separately. Advanced-stage LUADs with high ADCY10 expression are sensitive to ferroptosis. Moreover, LUAD cells with acquired therapy resistance are also prone to higher ADCY10 expression and are more likely to respond to ferroptosis. Finally, a varying degree of secondary labile iron increase is caused by the failure to sustain YAP-stimulated transcriptional compensation for ferritin at later stages further explains why ferroptosis sensitivity varies among LUAD cells.

Conclusions: Endogenous glutamate is critical for ferroptosis sensitivity following the inhibition of system XC- in LUAD cells, and ferroptosis-based treatment is a good choice for LUAD patients with later-stage and/or therapy-resistant tumors.