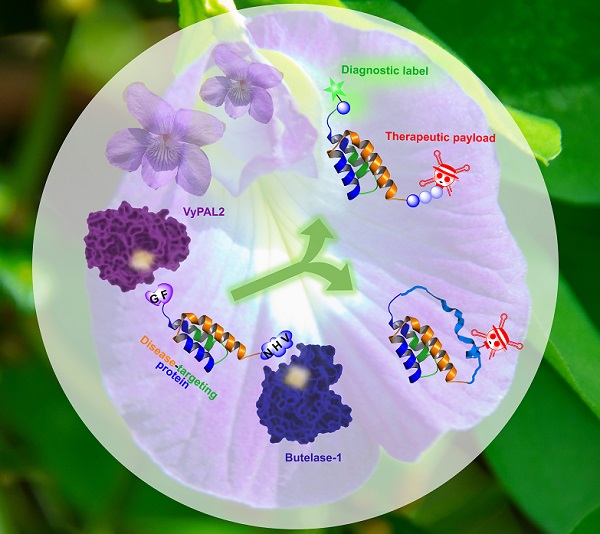 Background: Protein theranostics integrate both diagnostic and treatment functions on a single disease-targeting protein. However, the preparation of these multimodal agents remains a major challenge. Ideally, conventional recombinant proteins should be used as starting materials for modification with the desired detection and therapeutic functionalities, but simple chemical strategies that allow the introduction of two different modifications into a protein in a site-specific manner are not currently available. We recently discovered two highly efficient peptide ligases, namely butelase-1 and VyPAL2. Although both ligate at asparaginyl peptide bonds, these two enzymes are bio-orthogonal with distinguishable substrate specificities, which can be exploited to introduce distinct modifications onto a protein.

Methods: We quantified substrate specificity differences between butelase-1 and VyPAL2, which provide orthogonality for a tandem ligation method for protein dual modifications. Recombinant proteins or synthetic peptides engineered with the preferred recognition motifs of butelase-1 and VyPAL2 at their respective C- and N-terminal ends could be modified consecutively by the action of the two ligases.

Results: Using this method, we modified an EGFR-targeting affibody with a fluorescein tag and a mitochondrion-lytic peptide at its respective N- and C-terminal ends. The dual-labeled protein was found to be a selective bioimaging and cytotoxic agent for EGFR-positive A431 cancer cells. In addition, the method was used to prepare a cyclic form of the affibody conjugated with doxorubicin. Both modified affibodies showed increased cytotoxicity to A431 cells by 10- and 100-fold compared to unconjugated doxorubicin and the free peptide, respectively.