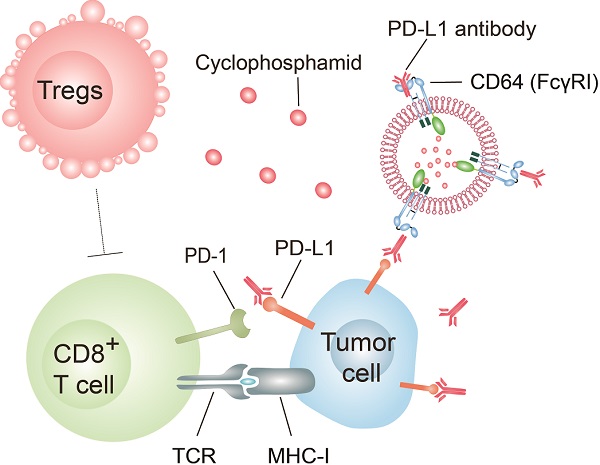 Immune checkpoint blockade therapies, especially those targeting the programmed death-1 (PD-1)/programmed death-ligand 1 (PD-L1) have achieved impressive clinical responses in multiple types of cancers. To optimize the therapeutic effect of the checkpoint antibodies, many strategies including targeting delivery, controlled release, and cellular synthesis have been developed. However, within these strategies, antibodies were attached to drug carriers by chemical bonding, which may affect the steric configuration and function of the antibodies. Herein, we prepared cluster of differentiation 64 (CD64), a natural catcher of the fragment crystalline (Fc) of monomeric immunoglobulin G (IgG), and over-expressed it on the cell membrane nanovesicles (NVs) as PD-L1 antibody delivery vehicle (CD64-NVs-aPD-L1), which was employed to disrupt the PD-1/PD-L1 immunosuppressive signal axis for boosting T cell dependent tumor elimination. Meanwhile, chemical immunomodulatory drug cyclophosphamide (CP) was also encapsulated in the vesicle (CD64-NVs-aPD-L1-CP), to simultaneously restrain the regulatory T cells (Tregs) and invigorate Ki67+CD8+ T cells, then further enhance their anti-tumor ability.

Results: The CD64-NVs-aPD-L1-CP could simultaneously interrupt the immunosuppressive effect of PD-L1 and decrease the inhibition of Tregs, leading to tumor growth suppression and survival time extension.

In recent years, immunotherapy has become a promising clinical treatment for cancer combining with surgery, chemotherapy and radiotherapy [1-6]. Currently, immune checkpoint blockade therapy has achieved impressive clinical responses in multiple cancers, such as non-small cell lung cancer, melanoma, glioblastoma, bladder cancer and renal cell carcinoma [7-12]. After years of developments, there are a couple of commercial checkpoint blockade antibodies, including Nivolumab (PD-1 antibodies), Avelumab (PD-L1 antibodies), and Ipilimumab (CTLA-4 antibodies) [13-17]. Particularly, PD-1/PD-L1 signal axis is the most common and broad target for cancer treatment. PD-L1 has been found overexpressed in multiple types of cancers, and it can inhibit the activation and proliferation of the effector T cells [18-20]. Therefore, preventing PD-1 from binding to PD-L1 by antibodies could promote antitumor immunotherapy [21-23]. However, anti-PD-1/PD-L1 therapy is not always effective and powerful to cope with all kinds of tumors and only about 20-40% of the patients can benefit from it [24-26]. Moreover, it should not to be neglected that excess antibodies can lead to autoimmune diseases [27]. Hence, how to improve the therapeutic effective and specific of the checkpoint antibody becomes an urgent issue. The drug delivery strategy has focused on reducing side effects and improves the therapeutic effect. To achieve these benefits, PD-1 antibodies were conjugating the platelets or platelet decorated hematopoietic stem cells to enhance the therapeutic effect of by with PD-1 antibodies [28]. Moreover, it can promote PD-L1 antibodies by wound targeting delivery to the tumor sites with postoperative resection to inhibit tumor relapse and metastasis [29, 30].

Cell membrane vesicles derived from erythrocytes, NK cells, tumor cells, platelets and stem cells, are considered as promising drug carriers to target tumor cells [31, 32]. Their good performance on biocompatibility, fluidity and circulatory stability, as well as the ability to cross biological barriers makes the exosome-like cell membrane NVs as attractive drug vehicles [33-36]. Particularly, genetically engineered cellular membrane can display naturally full-length antibodies, receptors or ligands, which can maintain their natural three-dimensional structures and functions [37, 38]. Meanwhile, they inherit the components and functions of original cell membrane, enabling them act as bioactive drug carriers to combine chemotherapy and immunotherapy for targeted anticancer treatment [37-39]. The cell membrane conjugating PD-L1 antibodies precede free PD-L1 antibodies in the ability of tumor cells combination and the release control, since only a portion of free PD-L1 can successfully bind to the tumor cells and their aggregation concentration is usually affected by various factors [28]. Moreover, the cell membrane NVs can express antibodies inherently instead of binding chemically, such as thiol-maleimide chemistry, which endows them with better orientation, powerful reactivity, and protection from destructing the active sites [28, 33, 38].

CD64, also referred to FcγRI, which is naturally expressed on the macrophages, monocytes, and dendritic cells, has high affinity to bind the Fc of monomeric IgG in nanomolecular range [40]. Once CD64 on macrophages binds to the antibodies, it can regulate immune response and disease development by affecting phagocytosis [41-43]. In addition, Tregs inhibit effector T cells and the activation and proliferation of CD8+ T cell by consuming interleukin-2 (IL-2) and releasing perforin and granzyme [44-46]. Herein, we prepared CD64 presenting cellular NVs, which can correctly combine with the Fc of PD-L1 antibody. CD64-NVs, conjugating with PD-L1 antibodies, can achieve tumor targeting delivery. PD-L1 antibodies execute PD-L1 blockade, thereby promoting CD8+ T cells to attack cancer cells. CP is a broad-spectrum anticancer drug; low dosage of CP could inhibit Tregs to reinvigorate CD8+ lymphocyte cells, directly enhancing anti-tumor ability of immune system [47-49]. The chemotherapeutic agent CP was encapsuled into CD64-NVs-aPD-L1 to facilitate CD8+ T cell forcefully and kill tumor cells through overcoming the obstacles of PD-1/PD-L1 axis and reverting Tregs suppression (Scheme 1).

Murine CD64 antibody for western blot and HPR labeled secondary antibody were from R&D Systems and KPL, respectively. GAPDH antibody was from Abmart. CD8 and CD4 antibodies for immunohistochemical staining and Alex Fluor 647 and Alex Fluor 488 labeled secondary antibody were purchased from Abcam. CD25, Ki67, Foxp3 antibodies for flow cytometry analysis and PD-L1 antibody for western blot were from Biolegend Inc. FITC-CD3 antibody was from Ebioscience. PE-CD4 and APC-CD8 antibodies were purchased from Life. Cyclophosphamide and hygromycin were from Sigma-Aldrich. Wheat Germ Agglutinin (WGA) Alexa Fluor 488 and 594 dyes were from Thermo Fisher.

The HEK 293T cells stably expressing EGFP-CD64 were cultured in DMEM with 10% FBS and 200 μg/mL hygromycin and harvested with trypsin. After being washed with cold PBS for two times and centrifuged at 1000 rpm, the cells were suspended with homogenization medium (HM) (pH 7.4) including 20 mM Hepes-NaOH, 1 mM EDTA, 0.25 M sucrose, and protease inhibitor. Afterwards, the cells were ruptured on ice at least 150 times using a dounce homogenizer. Then, the liquid in the homogenizer was collected and centrifuged at 1000g for 5 min and followed on centrifuging the supernatant at 3000g for 5 min. And then, the supernatant was centrifuged at 20000 rpm for 30 min. Next, the precipitation with HM solution was resuspended and extruded through the 0.8 μm and 0.22 μm filters for at least seven times, respectively.

The cells stably expressing EGFP-CD64 were digested, centrifuged, and resuspended with 1 mL PBS. Then the cells were filtered by cell sieve to make them become unicellular. Flow detection was performed directly for further analysis to determine the positive rate of GFPSpark-CD64 expression. 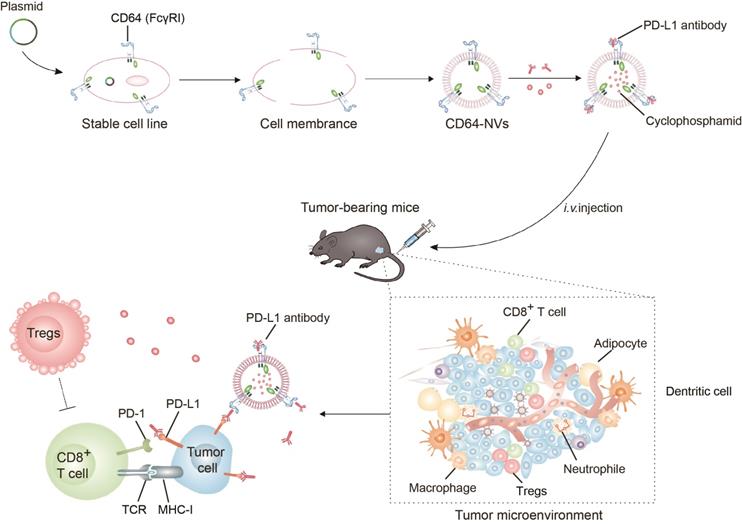 After the preparation of CD64-NVs, the vesicles were quantified using BCA assay. 1 mg CD64-NVs were incubated with 100 μg aPD-L1 and/or 500 μg CP at 37 ℃ for 4 h. After incubation, the NVs were washed in PBS by centrifugation at 12,000 rpm for three times. The precipitate was resuspended with 150 μL PBS and injected into a mouse.

Released of aPD-L1 and CP

CD64-NVs-aPD-L1 and CD64-NVs produced from CD64-HEK 293T cell line were labeled by NHS-Cy5.5 in PBS buffer overnight at 4 ℃ and washed by PBS for three times after incubation. The vesicles were injected into melanoma tumor bearing C57BL/6 mice through tail-vein. After 24 h, the tumors and major organs were harvested. The fluorescence imaging and intensities were detected with Xenogen IVIS Spectrum imaging system.

The luciferase-tagged B16F10 melanoma tumor cells were injected under the left dorsal skin of C57BL/6J mice. On the sixth day, the mice were divided into six groups. Mice were intravenously injected with PBS, CD64-NVs, CD64-NVs-aPD-L1, CD64-NVs-CP, aPD-L1+CP and CD64-NVs-aPD-L1-CP. The tumor burden was detected via bioluminescence after L-luciferin injection with an IVIS Lumina imaging system. Animal experiments were performed under an approved protocol by the Administrative Committee of Animal Research in the Sun Yat-Sen University.

The tumors were removed from anesthetized animals and instantly frozen in optimal cutting medium (O.C.T.). Ten micrometer sections were cut with a cryotome and mounted on slides. The tumor sections were soaked in PBS for 15 min and blocked with the buffer including 3% BSA for 30 min. And then, the sections were incubated with CD4 and CD8 primary antibodies overnight and washed with PBS. The sections then were incubated with Alex Fluor 647 and Alex Fluor 488 secondary antibodies at room temperature in the dark for 1 h. Finally, the nucleus was stained with DAPI and washed with PBS. Confocal microscopy was performed on a FLUO-VIEW laser scanning confocal microscope (Zeiss) in sequential scanning mode using a 40× objective.

All results are expressed as mean ± SD or the mean ± SEM as indicated. Biological replicates were used in all experiments unless otherwise stated. Statistical graph software Spss16.0 was used to calculate the difference of data in different groups. Differences between groups were compared by One-way or two-way analysis of variance (ANOVA) and Tukey post-hoc tests as indicated. P<0.001 was considered as extremely significant difference, P<0.01 as significant difference, and P<0.05 as statistical difference.

Schematic of the production and characterization of CD64 presenting NVs

In order to prepare CD64-NVs, we established the HEK 293T cell lines stably expressing CD64 on the cell membrane. HEK 293T cell is often considered as a engineered cell line because it can be easily utilized to express exogenous recombinant proteins and retroviruses after being transfected with plasmids in the biology research and industry [50-52]. GFP-Spark protein-tag was designed to attach on the C-terminal of CD64 protein, located in the intracellular membrane, while the interaction domain with Fc of CD64 was on the outside of the membrane (Scheme 1). Therefore, we cloned the mouse CD64 cDNA to pCMV3, a mammalian expression vector. The transfected HEK 293T cells were observed under the light microscope without selecting. We found that the majority of HEK 293T cells emerged green fluorescence which indicated the successful transfection. Furthermore, flow cytometry analysis showed that the percentage of green fluorescence positive cells was more than 90% (Figure 1A). To further obtain stable transfected cell lines, we screened the stable cell lines with hygromycin B. We further isolated the monoclonal cell from CD64 cell line to perform monoclonal amplification in order to obtain optimal cell line with intensive expression of CD64 protein (Figure 1B). Remarkably, CD64 was localized on the membrane as indicated by the localization of the EGFP fluorescence and the red fluorescence of Alexa-Fluor 594 conjugated wheat germ agglutinin (WGA) on the membrane (Figure 1C).

Next, the optimal CD64 cell line was largely cultured in order to collect the cell membrane. The cell membrane vesicles were prepared by extruding through 0.8 and 0.22 µm pore-sized hydrophilic membrane filters. The morphology of the CD64-NVs was detected by the transmission electron microscopy (TEM) (Figure 1D). The distribution of CD64-NVs was detected by the dynamic light scattering (DLS), which showed that the particle size was about 100 nm with the average zeta potential of -12 mV (Figure 1E and Figure S1). Coomassie blue staining showed that there was no significant difference between CD64-NVs and CD64 cell lines in the amount of CD64 protein, indicating that there was a small loss of cell membrane during the preparation of CD64-NVs (Figure S2). The expression of CD64 protein on the NVs was further verified by western blot (Figure 1F).

In vitro biological behavior and in vivo biodistribution of CD64-NVs

In vivo anti-tumor effect of CD64-NVs-aPD-L1-CP 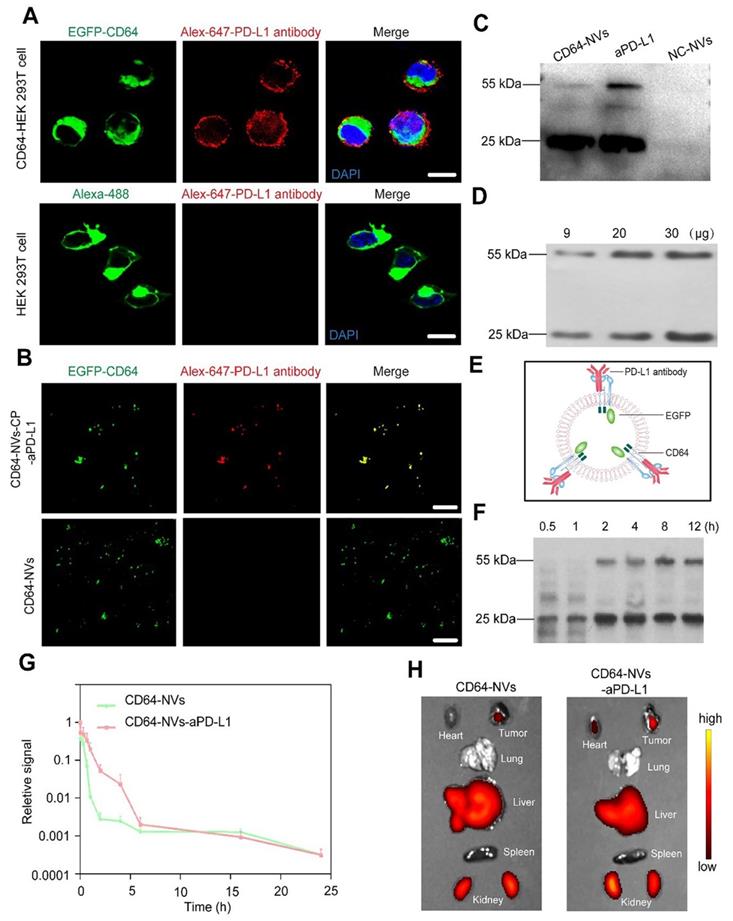 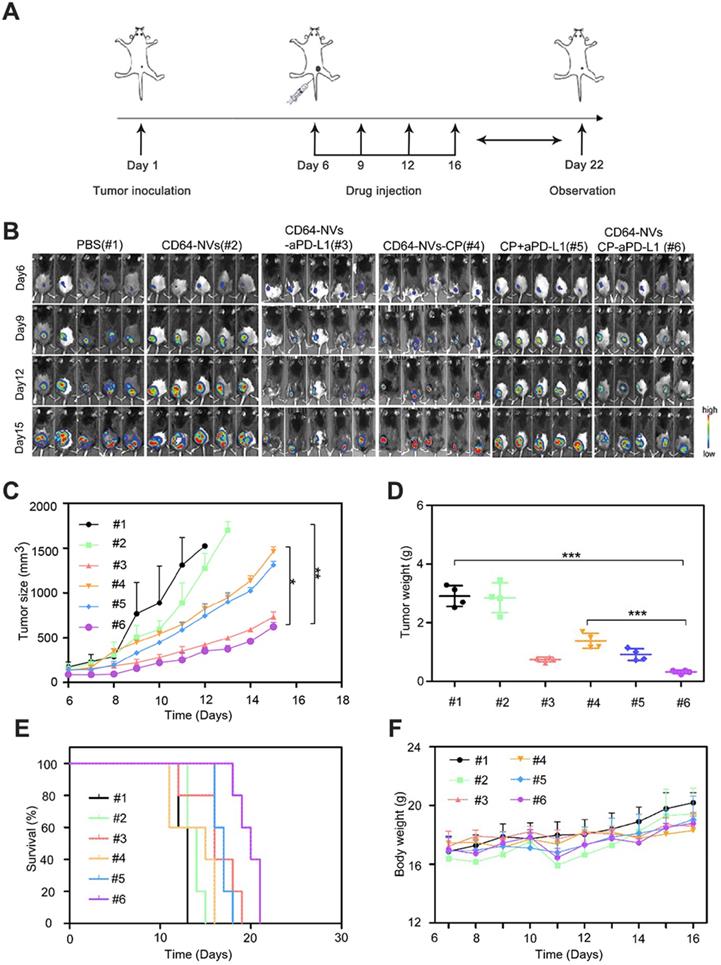 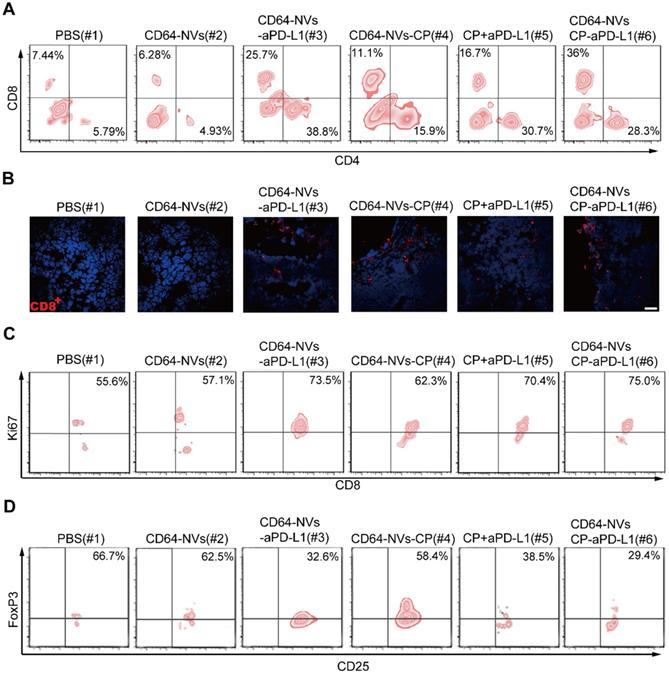 In summary, we engineered cellular NVs displaying CD64, which could capture antibodies by binding to the Fc domain without affecting their bioactivity. Virtually, PD-L1 on the melanoma tumor cells was blocked by CD64-NVs-aPD-L1 formulation in vivo, which promoted the anti-tumor effect of CD8+ T cells by enhancing activation and proliferation. Moreover, CD64-NVs-aPD-L1 could be considered as promising drug carrier to achieve the possibility of combination therapy. CP, an inhibitor of Tregs, was loaded into CD64-NVs-aPD-L1 and intravenously injected into melanoma mice. Hence, CD64-NVs-CP-aPD-L1 formulation liberated the effect T cells from PD-L1 and Tregs. The double promotion of T cell activation could inhibit tumor growth, improve the quality of life and extend survival time of the tumor-bearing mice. Thus, CD64-NVs are charismatic drug carriers that could achieve both checkpoint blockade antibody and immunomodulatory chemical drugs for combined cancer immunotherapy.